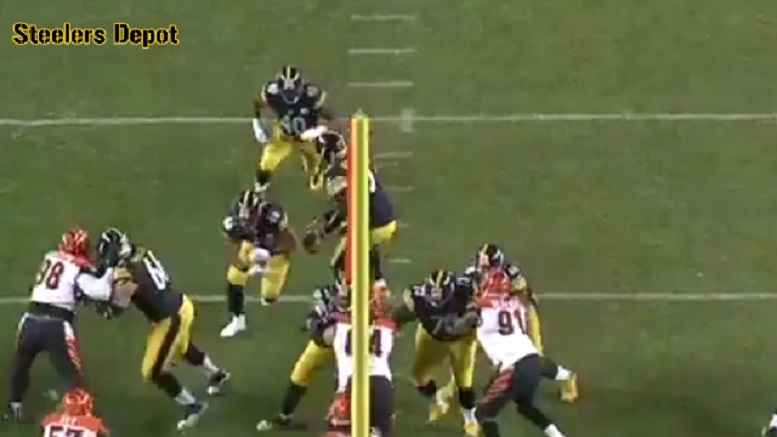 Sunday morning, and not too long after it was first reported that the Steelers had traded wide receiver Antonio Brown to the Oakland Raiders, apparently one Twitter user took to the social media platform to give his thoughts on what he believes is the main problem in Pittsburgh, and that it’s Roethlisbefger.

Replying to that anti Roethlisberger tweet not long after it was posted was former NFL running back Josh Harris, who spent the last several games of the 2014 regular season on the Steelers active 53-man roster following the team’s release of fellow running back LeGarrette Blount. Harris tweeted that Roethlisberger once purposely fumbled late in the Steelers 2014 Week 17 game against the Cincinnati Bengals because he didn’t like then-offensive coordinator Todd Haley calling a running play instead of a kneel-down. You can see Harris’ full accusation below along with the original tweet he responded to below.

2014 week 17 we were playing the bengals. Todd Haley called a run play with very little time left in the game. Ben wanted to kneel. He rolled his eyes in the huddle. He then purposely fumbles the ball. I had to recover it. At that moment I knew what kinda person he was.

Obviously, such an accusation quickly peaked my interest as soon as I saw the tweet and that made me check out the play Harris referenced.

Below is the end zone version from the all-22 of that same play and when slowed down, it certainly appears as though Roethlisberger attempted to hand the football off to an unsuspecting Johnson and that’s why the fumble occurred.

Harris doesn’t seemingly have anything to gain by saying that Roethlisberger purposefully fumbled late in that game against the Bengals and on top of that, he obviously didn’t have any trouble instantly recalling the play, when it happened, who it was against and maybe why. After all, the play in question happened in 2014, well over four years ago.

Not that it matters, really, but it would be interesting to see if Johnson has any recollection of the late fumble against the Bengals in 2014 and if like Harris, he thinks Roethlisberger purposely botched the play because of not liking Haley’s play call.

The next play call, by the way, was a Roethlisberger kneel-down and the game was then over after that. That game was also the game that Steelers running back Le’Veon Bell suffered a hyper-extended knee in that would ultimately prevent him from playing in the team’s Wild Card game loss to the Baltimore Ravens.

As for Harris, the Steelers ultimately waived him in September of 2015, just prior to the start of that regular season.

UPDATE: Harris has now posted a video that explains the play in question: