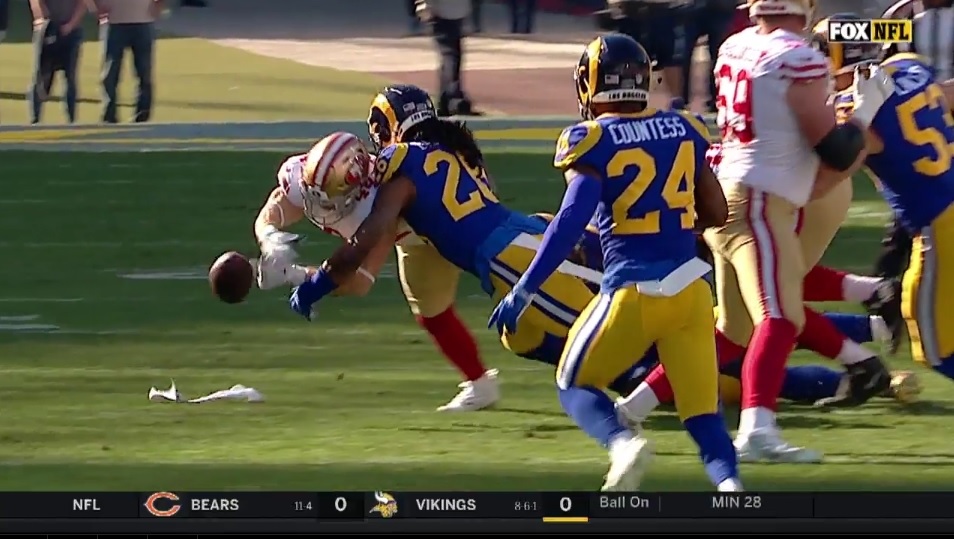 The Pittsburgh Steelers took another lap around the free agent pool Sunday, surprising many by signing linebacker Mark Barron to a two year deal worth up to $12 million. Off the top, it’s safe to say he’s the most controversial and divisive of the new faces added by the organization. Steven Nelson was a calculated, smart risk because the phrase “Artie Burns in coverage” strikes a fear in me I didn’t know existed. And Donte Moncrief was a shrewd, Kevin Colbert signing if there ever was one, another position of need that gives the team short-term stability and draft flexibility.

Barron is tougher to get a bead on. His role, his talent, his projection and fit into the Steelers’ defense. Some of that is on purpose. On paper, he could be a versatile chess piece and that inherently makes his role a little vague. So let’s break down his tape and see what he can bring to the team.

Mark Barron Against The Run

You probably know the basics of his story by now. A former first round pick, he transitioned from safety to a hybrid linebacker, beginning that trend alongside Deone Bucannon. Functionally, he only plays inside linebacker now, put a #50-something number on his jersey instead of the 26 he’s worn and we wouldn’t be talking much about “hybrids,” to be honest. But he is undersized, still looking like a big box safety.

However, it doesn’t mean he’s ineffective stopping the run. Barron’s run fits are strong and I like the patience he shows being able to read the play.

Liking Barron's run fits. Reads the split zone action by Taysom Hill but patient to keep his gap until Ingram makes his cut. Fast flow, play inside/out, meets the back out of the hole. #Steelers pic.twitter.com/jFTXBvGQiy

And with his athleticism, better than your average linebacker (certainly at a much higher level than Jon Bostic or any ILB on the roster, especially with L.J. Fort gone), he flows effective versus zone schemes and is able to work past reach blocks by bigger, slower linemen.

In the first clip against Green Bay, I really like how he played the toss inside/out. Didn’t overrun, didn’t give up his gap, and then closed to make the play.

But yes, as you’d probably expect, he can get overwhelmed when linemen are able to engage him and that causes him to get washed and knocked out of his gap. He’s not going to go through blocks effectively and I didn’t see much hand use to do so. He’ll have to go around and that can cause him to get out of his gap. When it’s bad, it’s bad. Watch him get driven out here, leading to a 51 yard run by Alfred Morris in Week 17. Barron is lined up between center and right guard pre-snap.

Roughly speaking, and to put it in terms Steelers’ fans can relate to, I’d put him a little below where Fort was at as a run defender because he isn’t as technical of a run defender while still lacking power/strength problems. Remember that I thought Fort was a better run stopper than people gave him credit for but obviously, was not without his issues.

Barron is an interesting guy in coverage. In zone schemes, he’s effective. A good athlete capable of getting depth in hook/curl zones or the middle hole defender, he can read the play and close with power (more on that in a moment). One example of that. Here, he isn’t dropping as much but you see the sideline flow and again, ability to finish and get the receiver down without additional YAC than already allowed.

But in man coverage? Different picture. The Rams didn’t use him a lot there, mostly zone dropping him, but when they did, the results generally weren’t pretty. Where Barron really struggles is his ability to match tight ends vertically which…is not what you want to hear talking about a potential dime guy with supposedly good athleticism.

In two of these plays, the tight ends in these clips didn’t come away with the football but it had nothing to do with Barron’s coverage. He’s vulnerable to biting on double-moves, late opening his hips, wants to be too physical, and has trouble locating the ball with his back turned.

So long story short. Good in zone, an issue in man. For a Steelers’ defense ranked third in man coverage usage in 2018, that’s a concern.

Something positive here. Really positive. One of the best part about Barron’s game is his hit power and ability to finish. The Steelers’ defense struggled here last year, really the past two, despite having, on paper, a team full of hard hitters. Too often, they allowed YAC or the pile to move forward. Like this Kareem Hunt run in Week 2, bouncing off and through tacklers before finally going down after a 16 yard run.

Ugly stuff. Barron isn’t like that. He gets guys on the ground with power and authority. One tweet I sent out that highlighted three plays, all receptions, to show that power that’s in his game.

Initial impression/thought on Mark Barron. Guy can still hit. Lack of hit power, problems getting backs/receivers on the ground, letting them push the pile, was an underrated issue of this defense in 2018. Barron's going to help there. #Steelers pic.twitter.com/jCBxzzUzcj

And some more of him versus the run. First clip, you see the flow and hit power and in the second, the forced fumble he caused on a 3rd and 1 fullback dive. Good finish to the play.

He brings physicality and solid tackling to this defense, both run and pass. And I definitely dig that.

Here’s where it gets interesting. Was he used like a dimebacker? That’s probably a question I’ll explore further sometime in the near future but the answer is yes…and no. For the most part, he played the traditional linebacker role. He’s not lining up at safety and often, won’t be over the slot.

Occasionally, he did split out wide against empty sets, like he did here against Alvin Kamara, carrying him vertical. 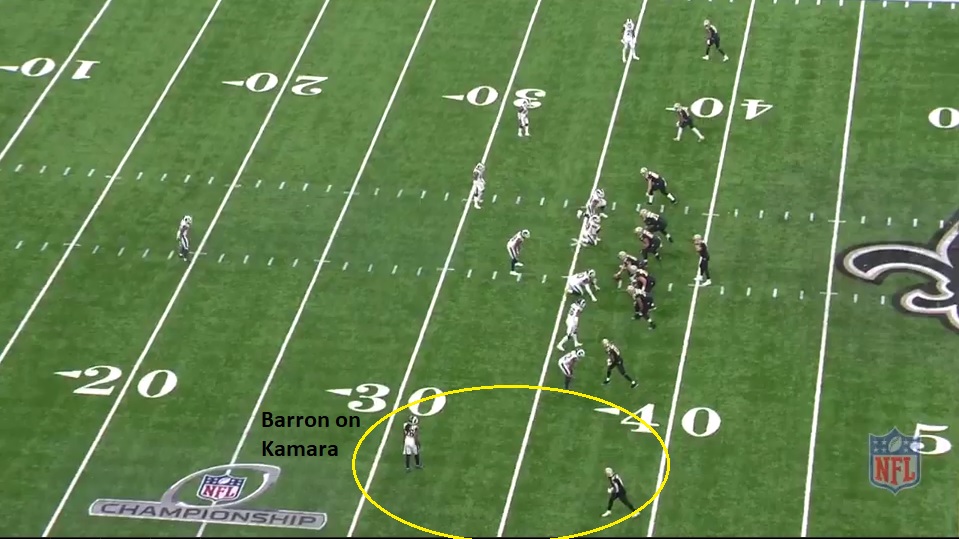 And they flexed him out of the box to match up on some 2×2 sets and tight ends split out too, though again, he’s had his problems there. 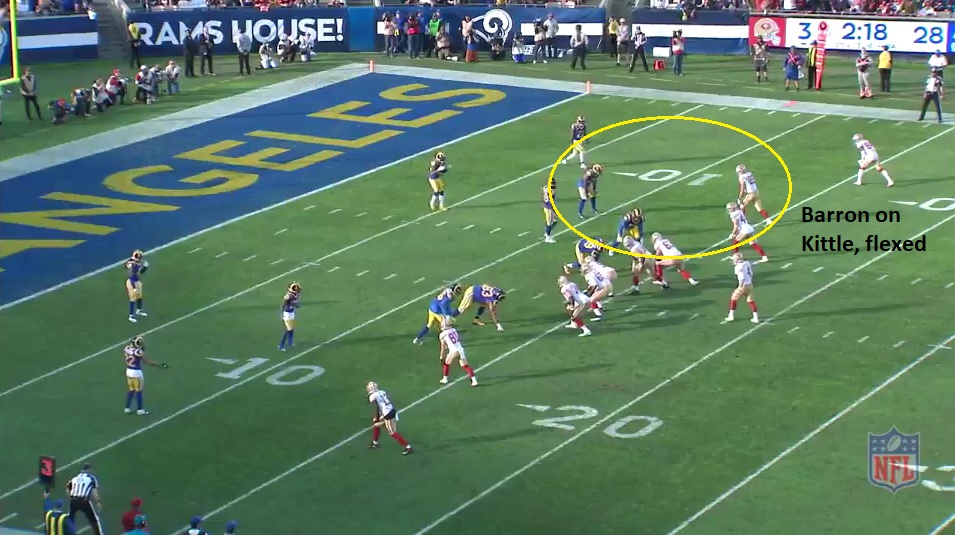 He felt a little more restricted and static in his position and role than Morgan Burnett was but that could be scheme related. It doesn’t mean he can’t be more flexible and at times in LA, he was, the scheme might just not have asked it of him.

Though we know the Rams’ offense as a 4-3, they were sorta hybrid, at least, in my look at his game (all the plays he was involved in last year, some from 2017, and three dedicated games in 2018). Their ends would stand up, put their hand down, they would align like a Steelers’ 3-3-5, as they did here. Barron is the man in the middle, splitting the goalpost. 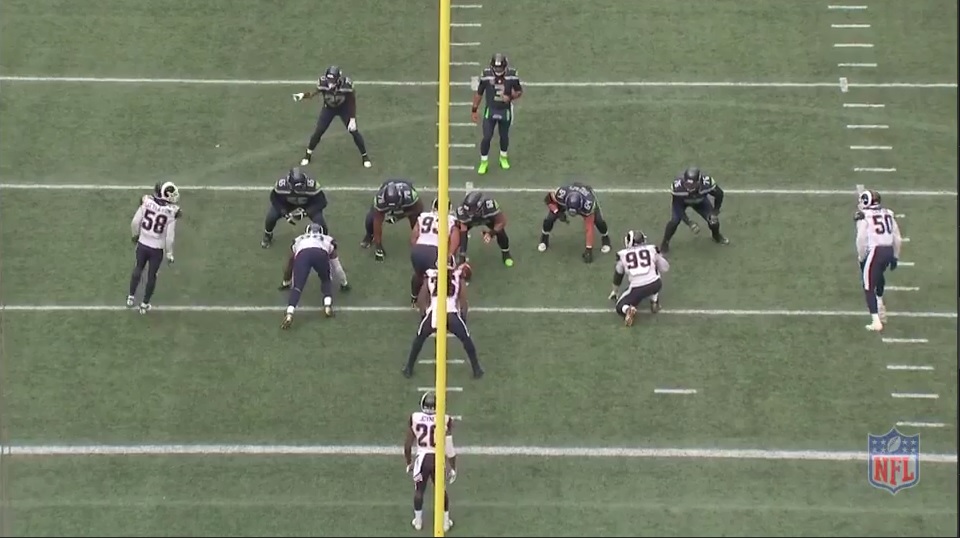 With schemes blurred and 4-3 vs 3-4 meaning a lot less than it used to, there transition shouldn’t be too taxing. One difference though is how clean Barron got to play. Yes, the Steelers have a great defensive line too but their linebackers get covered up a lot more than what Barron did in LA. And given his issues taking on blocks directly, that’s a concern for his run defense. Do you want him as an every-down run defender as a Mack linebacker? Ehhh, not too sure about that. Not as your Plan A.

Barron was also used as a bit-blitzer, recording exactly one sack in each of the last four seasons with the Rams.

So here’s how I see him being used. Three ways to look at it.

1. Used in that “dime” role if the team can draft a top-end linebacker, like Michigan’s Devin Bush. Where Bush and Barron can be paired on in the Steelers’ dime defense, two guys with sideline-to-sideline athleticism, capable blitzers, and hard hitters.

While he didn’t seem as flexible as Burnett, at least in usage, he’s definitely comfortable in that role. Something Burnett was not.

2. He could be the Mack linebacker if the team can’t get top-end, three-down talent in the draft. Which is a real possibility. Bush to Pittsburgh is no guarantee, it could definitely require a trade-up, and the team had to protect themselves if that didn’t happen. That was the issue they ran into last year when they missed out on the Big Three of Edmunds, Vander Esch, and Evans. It’s not ideal but it sure beats everything they currently have.

3. There’s also door #3. A sign the team will rock with their 3-3-5 defense, as I’ve hinted and we’ve saw in the regular season finale. 12 of the 17 uses of 3-3-5 came against the Bengals. In that world, either Vince Williams or that top draft pick becomes the lone inside linebacker while the 5th defensive back – Barron – is a third “safety,” in this case Barron, still playing that dime role. Here’s how it looked versus Cincy. Hopefully that provides a clearer picture. Literally. 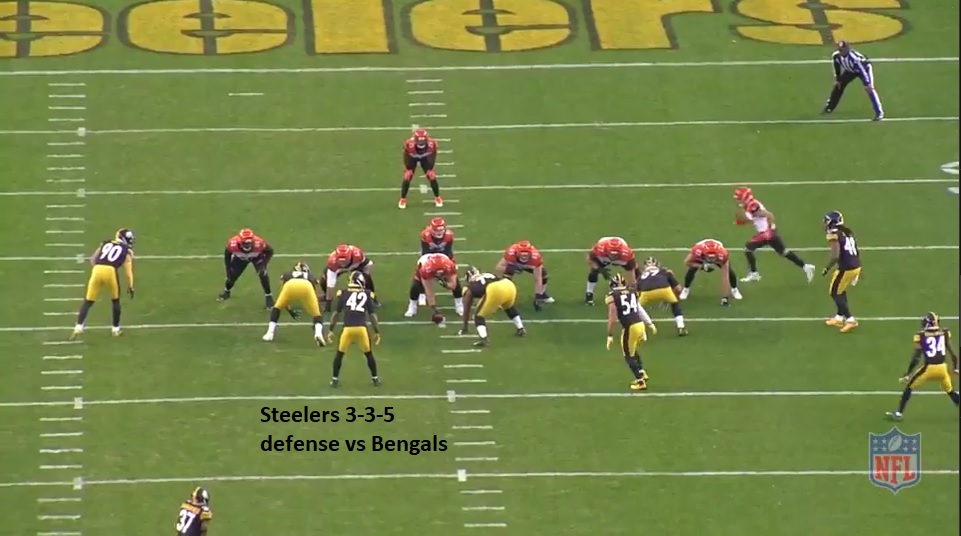 Like the Moncrief signing, this addition is all about flexibility. An insurance plan if they can’t get one of the Devin’s, more “smoke” for this defense so the defense doesn’t run out, as Mike Tomlin sheepishly claimed after last year’s loss to the Los Angeles Chargers.

But that flexibility creates smoke of its own. An uncertainty of what Baron’s role will be, one that may partially hinge on what happens in the draft.

My scouting report on Barron below.

– Powerful, impact hitter with great hit power and the ability to limit YAC and get runners/receivers on the ground immediately
– Strong tackler overall
– Patience and sound run fits, instinctive and reads plays well, able to fill his gaps and force backs to bounce runs, assignment sound when he gets to play clean
– Takes good angles to the ball, inside/out technique
– Athletic and flows well against zone schemes, able to get in front of reach blocks and meet runners at the edge
– Quickly gets depth in zone coverage, hook/curl or middle zones, closes quickly on the ball (safety traits come into play) and again, doesn’t allow YAC
– Can be moved around the defense, split out, matched up on tight ends, blitzing, or in coverage, wore a lot of hats

– Struggles in man coverage and carrying players vertical, has difficulty finding the football and impacting the catch point
– Overwhelmed at the point of attack against the run by base blocks who are able to engage him, causes him to get washed and removed from his gap
– Poor hand use to defeat blocks between the tackles
– Luxury of playing clean/unblocked with the Rams, unlikely to have some benefit with Steelers
– Play has dropped off and has lost some of his splash plays (3 TFLs, 0 INTs in 2018)
– Has undefined role in Pittsburgh’s defense