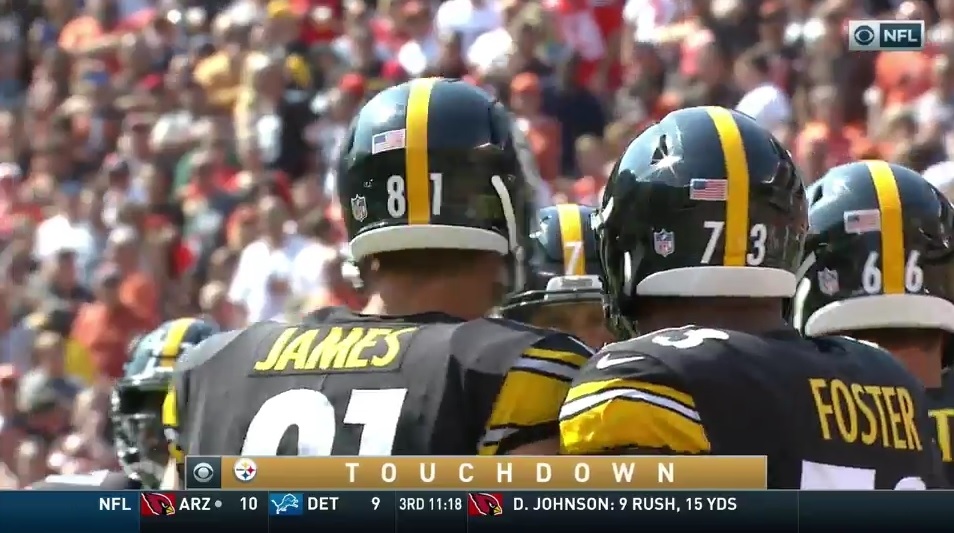 Don’t misunderstand me. No “Insert Team Name Here Way” is actually a thing. There’s no Patriot Way either. It’s just a nice soundbite for the 77th ESPN debate show or headline for NFL Films. Every team has their skeletons. Their internal hypocrisy, players lacking sterling reputations, history you try to forget. Right or wrong, that’s how business goes when the only goal is to win.

The two players who embody those ideals as much as anyone on this roster are about to become free agents. Ramon Foster and Jesse James. Their talent might not leap off the page but man, it’ll be a punch in the gut if both are in new uniforms in 2019.

Foster? What better story is there on the roster than him? Ok, probably Alejandro Villanueva but still, it’s a feel-good one. His career began as an undrafted free agent, someone nobody gave a shot heading into his first training camp back in 2009. I’m not picking on Ed Bouchette here because hey, no one could’ve guessed it, but his blurb on Foster from his ’09 training camp preview?

Foster got a less glowing review than Jason Capizzi, referred to as a “tantalizing prospect.” Capizzi never played an NFL snap.  Foster’s next start will be his 132nd.

Every offseason, I see people predict Foster’s downfall. Too old. Too slow. Too big. Father Time is coming to get him. Someday, that’ll be true. But he’s shown zero – and I mean zero – signs of slowing down. If anything, his 2018 campaign got stronger compared to others if you look past his slow start, no doubt tethered to missing the entire preseason with a scary-looking knee injury. His 340 pound frame is an asset in the run and pass game: strength to move blockers out of the way, a frame that’s tough for pass rushers to get around. Feet more nimble than you expect from his stature and age and excellent production even into his 30s. Durability isn’t a concern either. He’s started at least 14 games the last eight years, one of two offensive linemen in football who can say that. Only a pair have more total starts than Foster’s 119 – the highly regarded Andrew Whitworth and Joe Staley.

He’s one of the leaders of that line and in the locker room. Few are as good in the media as Foster. Win, loss, even that darn tie against Cleveland, he’s there to talk to reporters. Always available to own it. Gotta respect that.

James is a little quieter. And his resume, naturally, isn’t as extensive compared to the elder Foster. But there wasn’t a player I grew to appreciate more this year than James. If the best ability is availability, than James is more like Jerry Rice. There isn’t a tougher, more durable player on the team, maybe not in the league than him.

As far as I’m aware, James has missed ONE practice in his four year career. Yup, that’s totaling training camp, the regular season, and postseason. Do the math and he’s suited up for 272 of 273 practices, the only absence training camp practice #13 his rookie year – attending the funeral of his best friend – of his otherwise remarkable track record.

I promise he hasn’t played every game feeling like a million bucks either. There’s no question the dude’s played hurt. Todd Haley hinted at a still unknown but apparently serious-enough injury James gutted through most of 2017.

“A lot of guys may never have even played”, Haley said, “and he didn’t miss a practice.”

He suffered a back contusion in the third preseason game of 2018. Yet there he was, back for the following Monday session, when it would’ve been easy to take a couple days off before the real games began. Not James.

On field, he’s improved, making strides as a blocker and combative catcher, but those aren’t the traits you’ll miss. It’s his durability, knowing what you’ll get from him day-to-day, and a crucial insurance policy behind Vance McDonald, who’s essentially James’ polar opposite as the high ceiling, oft-injured type. And it’s hard to identify that type of player again. How do you confidently predict durability?

Here’s the rub. Both players might not come back. Each have valid reasons to test the market and sign elsewhere. Foster deserves to be paid, I think I’ve made that case pretty clear, and if the Steelers low-ball him, he should walk. Fans should support that.

James could have the chance to be a #1 tight end for a team that doesn’t need a dynamic tight end. Buffalo and Jacksonville reportedly have shown interest. And he’s lived in a locker room full of drama and storylines. For as low-maintenance as he is, he could be eager to get away, reinforced by his “Kardashian” comments weeks ago. Both players may choose to walk away, no matter how much the front office pleads.

But if I’m Kevin Colbert, if I’m Mike Tomlin, I’m doing everything in my power to convince both to stay. Pay Foster the money he deserves. Show James how different the locker room and its rules will be, how to bring a better sense of calm and focus back on football, where it needs to be. Play him high school highlights of his time at South Allegheny if you have to. Whatever it takes.

Replacing Antonio Brown will still be Pittsburgh’s toughest task. But finding players with the traits Foster and James have won’t be an easy either. Talent is easy to spot. Intangibles? Much trickier. Without those two, the Steelers will be worse off for it. Guaranteed.