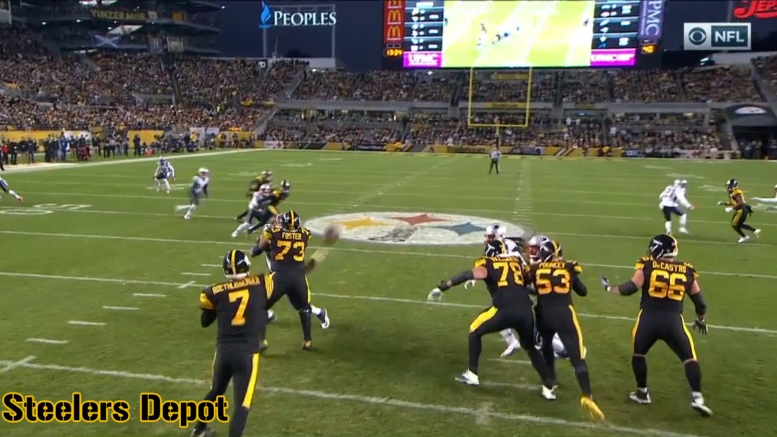 There are several throws from the 2018 season that I’m sure Pittsburgh Steelers quarterback Ben Roethlisberger would love to have back, but not as much as the time wasted listening to all the drama surrounding him and the team that has unfolded this offseason.

Outside of a handful of bad interceptions, however—several of which occurred in the end zone, and one of which prompted him to say one of the dumbest things he’s ever said publicly—it was really one of the best seasons he ever had, including throwing for over 5100 yards and 34 touchdowns. Both of those mark franchise records and personal bests, and the former led the league. Yet he didn’t even make it into the Pro Bowl.

Over the years, the strength of his game has come, as it should for any franchise quarterback, to be his presence in a clean pocket. And in recent years, he has spent more time playing behind a clean pocket than any other quarterback in the NFL, thanks to the Steelers’ very stout offensive line, who are particularly adept at pass protection—though his more rapid time-to-throw is a major factor as well.

While he was still prone to forcing some passes here and there, one statistic that exemplifies what he is still capable of doing as he approaches his 40s comes from Pro Football Focus. According to their tracking, Roethlisberger recorded more ‘big-time’ throws behind a clean pocket in 2018 than any other quarterback with 30. Both Russell Wilson and Baker Mayfield had 27.

Big Ben lit up the field from a clean pocket – making more big-time throws than any other QB. pic.twitter.com/yPuUYq3QCd

The concept of the ‘big-time throw’ is not clearly defined, but there is a good article on their website that goes into the nuances. Essentially, they are throws that are not only excellent but also difficult to make—but they don’t necessarily result in a catch. A big-time throw could be dropped, for example.

What it’s basically saying is that under ideal circumstances Roethlisberger is still a top of the line player capable of making just about every throw on the field—and that is kind of what you want out of your starting quarterback, especially if you’re paying him a lot of money.

Roethlisberger’s 541 snaps from a clean pocket during the regular season were by far the most in the NFL, with Andrew Luck’s 479 coming second. Only five quarterbacks were within 100 clean-pocket snaps of him.

He completed 384 of 536 pass attempts from a clean pocket, for a completion percentage of 71.6, for 4153 yards, 29 touchdowns, and eight interceptions, with a quarterback rating of 105.9. Only Luck and Patrick Mahomes threw more touchdowns from a clean pocket, and nobody else had even 4000 yards, though his completion percentage was middle of the pack.

More to the point, a league-high 75.9 percent of Roethlisberger’s dropbacks were into a clean pocket, with only seven other quarterbacks hitting 70 percent. The numbers show that the Steelers were wise to invest in their offensive line to allow him to be at his best—though he does need to throw fewer interceptions. Without Antonio Brown to force the ball to, however, perhaps he will.