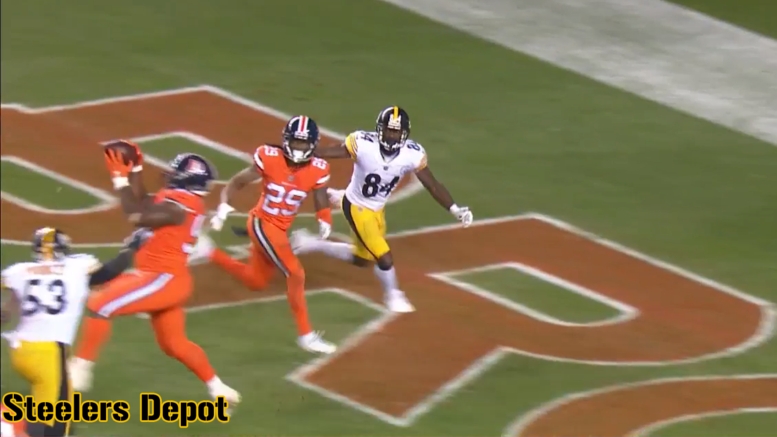 The Pittsburgh Steelers and wide receiver Antonio Brown are headed for a divorce. This was overwhelmingly likely, but I think after his comments that he made on HBO’s The Shop earlier tonight, I don’t believe there is any other reasonable alternative.

Appearing alongside LeBron James and Anthony Davis of the NBA, Brown sounded off, extensively and colorfully, about most of the things that were on his mind that ultimately led to his growing tired of the organization. At one point, Davis asked him if it was possible to go back to Pittsburgh. James said that he doesn’t think that’s possible, as Brown muttered, “there’s too much smoke’.

While many of his complaints may well be merely in his head, there was at least on gripe that was legitimate, and has always been regarded even on the outside as legitimate. That was following the loss to the Denver Broncos in which quarterback Ben Roethlisberger struggled mightily to take any responsibility for the game-ending interception in the final moments at the goal line.

The Steelers had just completed a six-game winning streak as they were looking to make it seven against the Broncos when Roethlisberger threw a pass to Brown in the back of the end zone that was intercepted by a defensive lineman. While appearing on his radio show later in the week, the quarterback said that Brown didn’t run his route well enough, and that he wasn’t expecting Maurkice Pouncey to block the lineman into the end zone.

I would imagine that this didn’t sit well with a lot of people in the locker room, whether it was ever spoken or otherwise. And the truth is that this is perhaps the most egregious example in Roethlisberger’s 15-year career in which he deflected responsibility. Unfortunately, it’s also the example that many are currently using to define who he is, including Brown.

“The dude called me out. We lose a game, he’s like, ‘damn, AB shoulda ran a better route’”, Brown said on The Shop, referring to that Broncos game. When Davis asked him why Roethlisberger would do that, he echoed comments that he had previously made on Twitter about the quarterback.

I don’t think there will be much argument against Brown when it comes to this specific example, even among those who are just counting down the hours until he puts on another uniform. Perhaps he could have run a better route, but Roethlisberger was off-base with his remarks that week.

That said, that lone incident shouldn’t be enough to erode a nine-year relationship. Brown surely has plenty of other incidents to cite, but whether or not they support his argument as well as he thinks they do is difficult to determine, at best, due to a lack of inside information.