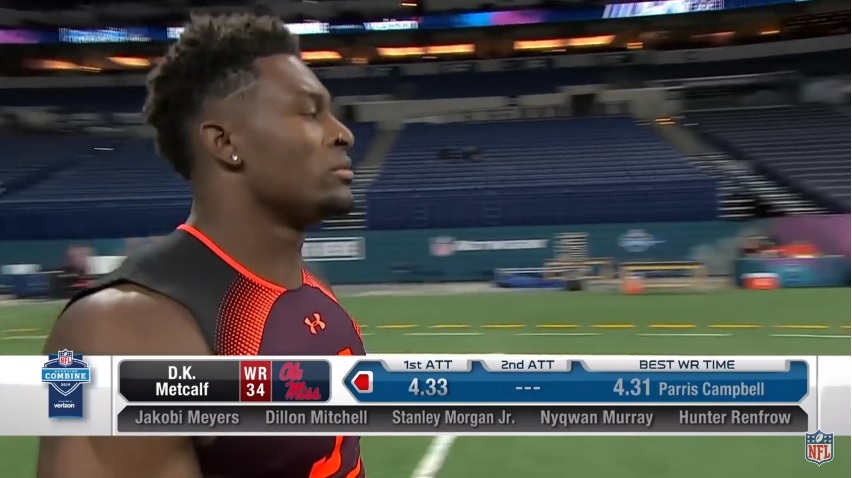 A long, busy, and eventful Day Two of the NFL Combine is in the books. Today finished up the offensive players with the quarterbacks, receivers, and tight ends went through their testing today. Lot to discuss so let’s recap what happened.

– Obviously, a little air out of the stadium with Kyler Murray not working at all today, though that was announced and shouldn’t come as a surprise to anyone.

Pretty much all the quarterbacks ran well, relatively at least, speaking to the nature of the college game and how virtually all offenses ask their QB to be at least a little mobile. The average 40 time of the 15 players who ran? 4.77 flat.

Virtually all of them ran as you’d expect. Tyree Jackson was fastest, turning in a very impressive 4.59. Combine that with a cannon arm and the ability to throw on the move/scrambling and you have an intriguing prospect. Where does he go? Day 2? Early Day 3? Everything about him is unusual. From his arm, his athleticism, his story (he learned QB drills by watching them on Youtube) to his body type and makeup.

He showed off that arm in the gauntlet drills to the point where Steve Smith pleaded with him to throw with a little less zip.

Steve Smith was yelling at Tyree Jackson for throwing the gauntlet passes too hard 😂😂😂 pic.twitter.com/kAfaDkwaeh

Last thing on Jackson. Long arms at over 34 inches. Often, that can work against quarterbacks. Usually means a longer release, a bad trait for your passer.

– Dwayne Haskins predictably ran slow, the worst of the QBs with a 5.04. But unless you’re Stephen A. Smith, you knew he wasn’t a great athlete. He and the other top quarterbacks who did work out all did…fine. Nothing terrible, nothing spectacular. I’ll be honest – didn’t pay as much attention to this group as the past few years, knowing the Steelers won’t take one, but I don’t think anyone did much to drastically change their stock. Not that you should expect that anyway.

Some inaccuracy from Boise State’s Brett Rypien on breaking routes and the shotgun quarterbacks, which is to say most of them, working on getting depth away from center. One of the coaches reminded NDSU’s Easton Stick to get more depth in his initial steps, critical for an under-center drop. That avoids getting stepped on by a linemen and lets you get to the top of your drop, able to scan the field and get the ball away on time.

– Really fun group of guys. The Iowa kids are both going to wind up as first rounders. More of a question of where they’ll go. Noah Fant had the best day of anyone in his group. His results…

Those are receiver numbers, great ones, in a 6’4, 249 pound package. Caught the ball well in drills too.

– LSU’s Foster Moreau was thought by some, myself included, as a possible mid-round sleeper for the Steelers. Doubt that’s the case anymore. Excellent workout, putting up a 4.66 at 253 pounds with a 36.5 inch vert and 10’1″ broad. He and Ole Miss’ Drew Knox showed the ability to catch the ball low and outside their frame.

Think you’re looking at a later Day Two prospect. So if the Steelers want him, it’s going to cost a third.

– The tight end who struggled the most? Georgia’s Isaac Nauata was a massive disappointment. Billed as a sleeper and maybe in that second tier behind the top names, he put up some terrible numbers. 4.91, 28 inch vert, and 7.45 three cone, the latter two literally the worst of any participant. And he’s only 244 pounds. He’s not a 260 pound blocker where you sorta expect him to test poorly.

Put it this way. 315 pound offensive tackle Andre Dillard had a better vert, shuttle, and nearly the same 40 time (4.96). This workout really hurt him. One positive though. Coaches liked his strike in the blocking drills.

– UCLA’s Trevon Wesco is has that blocker frame with 34 3/4 inch arms on a 267 pound body and ran a time that reflects it (4.89). In drills, he definitely was a body catcher who let a lot of passes into his chest.

–  San Diego State’s Kahale Warring is someone I’m excited to check out. Couple clips I saw showed a vertical threat with size (6’5, 252) and the ability to make contested catches. Caught the ball well in drills while doing so at speed. Maybe not the best fit for what the Steelers look for but still interested in learning more about him.

– Alabama’s Irv Smith is smooth as butter. Not a workout warrior but handled the gauntlet without issue and can track the ball downfield. Work to do as a blocker. “Need more strike!” a coach called out after his poor punch (hands outside) attacking the bag.

– You know who stole the show. Ole Miss’ DK Metcalf. Aside from an ugly short shuttle time, his big body isn’t suited for that type of short area quickness and flexibility, he was awesome everywhere else. 228 pounds running a 4.33 40, 40.5 inch vert, and 11″2′ broad? Get out of here, man. He’s going to be the #1 receiver off the board and very likely to wind up in the top ten, an idea far from being cemented prior to Saturday’s workout.

He’s a vertical threat who will win every jump ball imaginable with the ability to stack corners and box them out. Ask him to do that in your offense and you have a great player.

– Two guys I really wanted to hone in this afternoon. Deebo Samuel and Riley Ridley. Mentioned them as good fits for Pittsburgh yesterday. Samuel had an excellent day. Ridley? Ehh.

Samuel ran the sub 4.5 I thought he could, officially timing with a 4.48. Coupled that with a 39 inch vert and 4.14 short shuttle, a fifth best for the position. Squarely in play for the Steelers at 52.

Ridley definitely performed better in drills than in his testing, where he got to show his hands and fluidity. Nothing with his testing stood out. 4.58 40 isn’t terrible but decidedly average for 199 pounds while everything else was much worse. 30.5 inch vert, 4.28 short shuttle.

Only once have the Steelers drafted a receiver with a 30.5 vert; Justin Brown in 2013 and we know how that turned out. His lack of production and poor testing is a troubling combination, even though I like the tape.

– Just to clear up the confusion if you were watching it live or saw some of the unofficial numbers. UMass’ Andy Isabella ran an official 4.31, tied for the fastest of the Combine. The unofficial times from NFL Network were incorrect.

– He tied with Ohio State’s Parris Campbell, a big slot receiver with wheels. He’ll have to learn to play in a lot more restricted space than he did in college though. Already knew he was athletic.

– Gary Jennings might be a Steelers’ sleeper, especially if they choose to double-dip. 6’1 214 with 4.47 wheels and a 37 inch vert. Local kid and profiles like a future Colbert pick.

– Emanuel Hall and Darius Slayton confirmed their deep. Deep threats. Each recorded a 4.39 40.

Go watch his 40 too. Really long strider. Have his first run queued up here.

– Hakeem Butler and N’Keal Harry. Two big guys testing well. Fair to ask if they’ll make their way into Round One. I suspect at least one of them will.

– Georgia’s Mecole Hardman blazed a 4.33 but was made at himself for how “slow” he was out of his stance. Given the nature of Pro Days and his sincere speed, I bet he nails a 4.28 if he runs again at his alma mater.

– Worst 40 of the day? The man with the best name, Texas’ Lil’Jordan Humphrey, who could only manage a 4.75. Other testing wasn’t very impressive either.