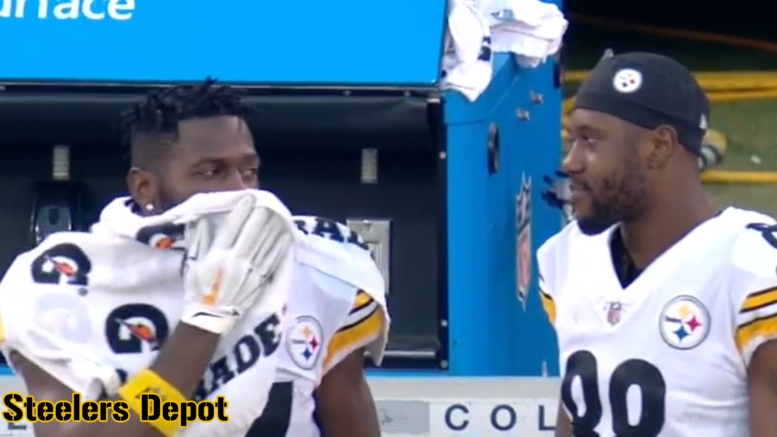 Earlier in the week, Peter King reported that his sense was that a deal would be done by March 17, when Brown’s roster bonus was going to be activated, and that it could even get done within the week. Then we heard a couple of days ago that the Steelers seemed to feel that way too, and wanted all bettors to put their cards on the table by Friday.

Last night, Gerry Dulac of the Pittsburgh Post-Gazette reported, following several reports of teams denying interest or losing interest, that the Steelers were talking to ‘several’ teams about Brown and that the soft Friday deadline essentially didn’t really mean anything.

Well, we know it didn’t really mean anything. But the fact that this had to come out is a pretty strong indication that they are not getting what they’re looking for, which is a first-round pick. And it’s increasingly looking like this is a one-team race. All of the other chiefs names that have been floated, such as Washington and Tennessee, have been reported to have backed out.

Ian Rapoport last night floated the idea that the Buffalo Bills were finalizing a deal, but that was shot down by, frankly, more credible reporters, among them Adam Schefter, who said that indications are it will be difficult for the Steelers to meet their desired timeline of getting a deal done today.

I’m really not even brimming with confidence that the Steelers are going to get a second-round pick out of all of this, when all is said and done, though I do think it’s a distinct possibility, even as a first-rounder seems less and less realistic as time goes on.

A team that trades for Antonio Brown is going to get a lot more than his 100-plus receptions, 1300-plus yards, and 11-plus touchdowns per season, of course, which is the only reason they’re not getting a first-rounder and then some, because that is what his pure talent commands.

They are getting a wide receiver who will be 31, who forced his way out of his current team, who just said that he doesn’t need to play football and if he does he’s going to do it with a team that plays by his rules.

They are getting a player who despite having three years left on his contract wants it reworked, at the bare minimum, to turn much of what remains in base salary into full guarantees. Only about 28 percent of his original contract was guaranteed.

They are getting a player who has known issues working with a number of teammates and coaches and is now willing to state it publicly, while he is still employed by that team; a player who plays the victim in spite of numerous reports about special treatment.

Let’s face it: this is a buyer’s market for one of the greatest players of this generation, and it didn’t have to be this way. As the clock continues to tick forward, the odds that the Steelers have to accept an undersell on this deal increase, as their threat of retaining him falls on deaf ears and teams turn their attention elsewhere.