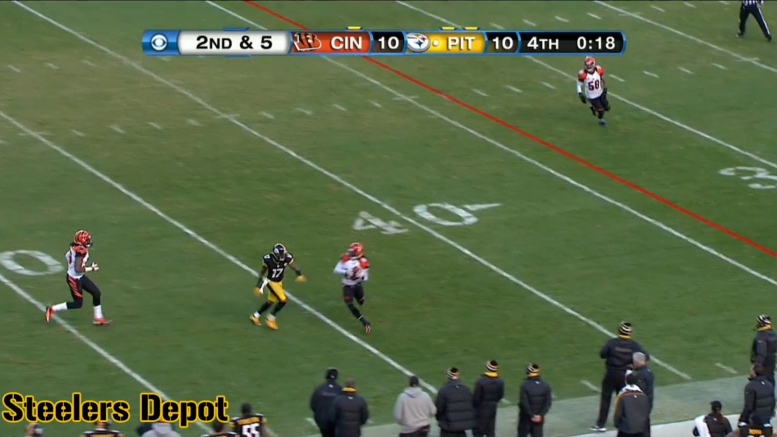 The day was December 23, 2012. The Pittsburgh Steelers were playing host to the 8-6 Cincinnati Bengals, riding a two-game losing streak that set them at 7-7 and teetering on the brink of having not just a lost season, but a losing season.

Quarterback Ben Roethlisberger had been playing through injuries for much of the year, including a major injury in a win in the ninth game of the season that knocked him out for a few games, during which his backups went 1-2. When he returned, he did not play like the same player, and a 6-3 start crumbled into an 8-8 finish.

The season hung in the balance on that late December day, only to see Roethlisberger continue to struggle, throwing two critical interceptions that helped define the game. The first was picked off by Leon Hall and returned 17 yards for a touchdown. The second, intended for Mike Wallace, came with just 24 seconds to play from the Steelers’ 29-yard line, picked off by, of course, Reggie Nelson.

It was a tie score after the teams traded missed field goals from 50-plus yards, 10-10. The Bengals went three-and-out, Pittsburgh getting the ball back with 44 seconds to go. The only thing they couldn’t do was turn the ball over.

Then that was exactly what Roethlisberger did, overshooting a floater north of Wallace’s head and into the waiting arms of Nelson. As another Nelson—new Steelers cornerback Steven Nelson—watched from home, as many of us did.

It all but sealed a loss, and with it, a 7-8 season, and a guarantee that, for the first and only time in the Mike Tomlin era, the Steelers would play a regular season finale in which there was literally nothing to play for, because they were already eliminated from postseason contention.

Nelson was watching—and he wasn’t happy. Evidently a Steelers fan, he turned to Twitter at that time to blow off steam. “Steelers ****in suck that ain’t my team nomore straight up”. How many of us haven’t said something like this at some point over the course of their fandom?

Evidently, somebody dug up this Tweet last night and it started to go viral in the Steelers Twittersphere, which prompted him to delete it, understandably, but it’s wholly unsurprising that at least one person had the forethought to screenshot it.

Quite frankly, I find the whole thing endearing. It means that he was already a fan of the organization long before he came here. And it also shows that he was legitimately a fan, because he was invested in the outcome, and was frustrated with the result. As was the team.

Nelson shouldn’t feel any shame over the old Tweet—far worse from other players have certainly been dug up—but it’s also understandable why he chose to get rid of it. From the reactions that I saw while it was still active, most had a similar reaction to me. And I hope those of you reading share that reaction, or at least don’t have a negative one over a six-year-old Tweet from when he was 19.