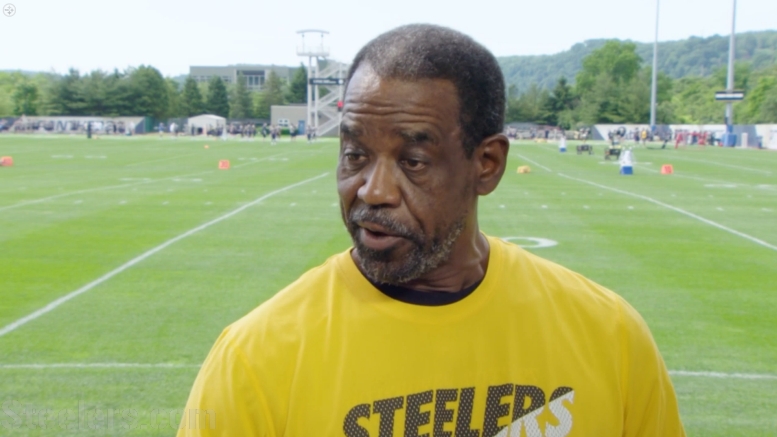 There is no Pittsburgh Steelers coach who has a more distinct reputation for toughness than does John Mitchell, though the long-time former defensive line coach no longer has an on-field role. He transitioned full-time to the role of assistant head coach, focusing solely on administrative off-field duties, in 2018, but had been the Steelers’ defensive line coach going all the way back to 1994, deep into Bill Cowher territory.

That means he spent decades eyeing down defensive linemen for the Steelers at the NFL Scouting Combine. One of the more recent players to pass his eye test and convert that onto the field was Stephon Tuitt, whom the team drafted in the second-round of the 2014 NFL Draft.

And that eye test had to come largely off the field. when Tuitt got to the Combine that year and went through his physical, he learned that he had a stress fracture in his foot, and he would not work out for teams. But he would do everything else. And Mitchell would watch intently.

“I remember Coach Mitchell looking at me up and down, giving me the eye test and giving me some hard, serious questions”, he told Teresa Varley for the team’s website as the Combine gets underway. “That stuff is not easy. They challenge you. You stay true to yourself, know why you are there. You have an opportunity, so don’t change. Just be yourself and continue to grow and the coaches will respect that”.

Tuitt began his NFL career as a rotational backup behind, literally, Cam Thomas, whom the Steelers signed in free agency that year. However, as they moved to mostly sub-packages, it was Brett Keisel who received the lion’s share of the snaps.

When Keisel suffered a season-ending injury, the coaching staff made the decision to make a change in the starting lineup, so Tuitt started the final four games of his rookie year, as well as every game for which he was healthy since.

Though he has had injury issues in each of the past four years that has kept him out for a total of 10 games, he has racked up 178 tackles in his career to go along with 20 sacks, four forced fumbles, an interception, and 10 passes defensed.

Tuitt is coming off of the second-best season of his career, posting 45 tackles and five and a half sacks, both marks representing the second-highest he has record, behind only the 2015 season, his first as a full-time starter. His four passes defensed was also a career-high, besting the three that he had in 2015.

This year it will be Karl Dunbar doling out the eye test, which is something he’s certainly used to, but he’s only in the second season of his career with the Steelers. With two backup linemen scheduled to be free agents, there’s a good chance the team drafts him a new player to work with. The last draft pick that stuck was Javon Hargrave in 2016 in the third round.