Shot #1 – I worked last week at attempting to compile a much more complete career defensive stat line for former Steelers safety Donnie Shell via old team media guides, NFL gamebooks and newspaper box scores and below is what I have come up with so far. Mind you that these stats are unofficial but they should give you a much better idea as to what kind of all-around player Shell was and why he belongs in the Pro Football Hall of Fame. You’ll be hearing a lot more from me on this topic in the future. 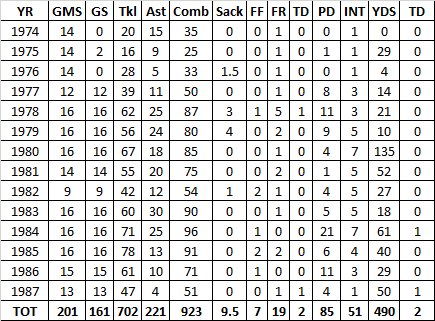 Shot #2 – Former Steelers guard Alan Faneca once again wasn’t voted into the Pro Football Hall of Fame this year but Clark Judge, one of the voters, wrote recently how he believes the current logjam with offensive linemen could change next year. If that happens, then we should see Faneca finally get in a year from now.

Shot #3 – Former Steelers inside linebacker Terence Garvin had two interceptions for the Orlando Apollos in their inaugural AAF league game Saturday night and you can watch both of them below.

Shot #4 – Speaking of the AAF, below is how the new league is handling official reviews and there is quite a bit of transparency included in the process.

In @TheAAF, you'll get to hear the referees during a replay review. pic.twitter.com/PdDsTTmQdx

After some careful consideration, @aafAPOLLOS get the first touchdown in the history of @TheAAF. pic.twitter.com/dCTBYvCEMF

Shot #5 – Hopefully you didn’t miss this recent video of former Steelers defensive end Brett Keisel. Wait until you see who is in goal. Keisel’s 9th annual ‘Shear Da Beard’ event is on Friday, February 15, 2019 at Jergel’s and as usual, all proceeds benefit the cancer program at The Children’s Hospital of Pittsburgh.

Shot #6 – 37 years ago today is when Hall of Fame defensive lineman Joe Greene retired from the Steelers. The team’s official website has an article up today that commemorates that event along with a video of Greene’s entire retirement speech.

#OTD in 1982, one of the best to ever wear Black & Gold called it quits. pic.twitter.com/hA0ejtZXVF

Shot #7 – Are NFL running backs easily replaceable? Eric Eager of Pro Football Focus attempted to answer that question in a post a few days ago. It’s a great look at the 2018 season and the running back position via analytics.