Chris Boswell was far from great but just how poor was his performance in 2018?

Whether you heard it from a Pittsburgh radio show, fan forum or on social media, there is a very good chance you heard statements proclaiming that Boswell was the NFL’s worst kicker throughout the 2018 NFL season.

Now Boswell’s 2018 season was far from decent, it was in fact disastrous. The Pittsburgh Steelers kicker converted just 13 of his 20 field goal attempts while also missing five extra point attempts. Since he signed with the Steelers in 2015, Boswell has never missed more than four field goals in a season, this year he missed seven. Up until this season, Boswell had only missed five field goals in the 40-49-yard range, this year he missed five in that range alone.

Again, it was a horrid season for the Steelers’ kicker but is he deserving of the title of worst kicker in the NFL? From a fan perspective, the answer is an easy yes. But fans are emotional and while Boswell did have an extremely poor season, was it the worst in the NFL? With the help of analytics and data, that answer can be provided with both facts and data.

In the chart below, I have compared every kicker’s field goal percentage to their extra point percentage to see if a mediocre, average and elite category could be drawn from the data. Below are the results. 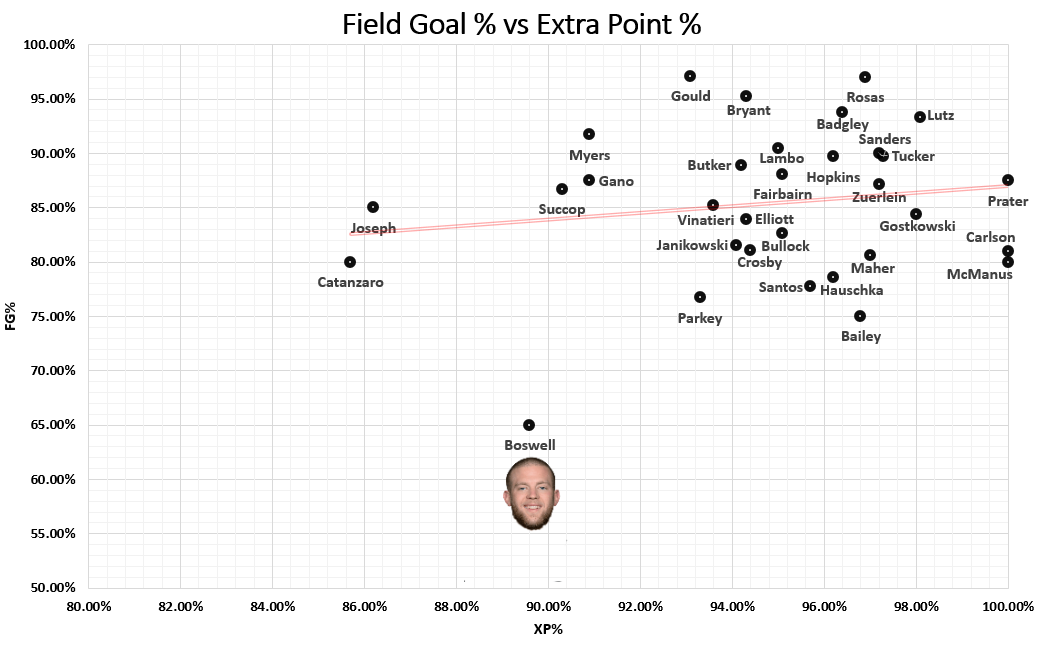 Boswell is very much Mr. Lonely, he is far, far away from most of his peers. He is also quite far from the linear average. The Steelers kicker finished with the worst field goal percentage out of all kickers with a minimum of 16 attempted kicks and his extra point percentage was third worst in the NFL. Based off statistics, there is a very good beginning argument to make that Boswell was the NFL’s worst kicker in 2018.

Now, let’s add more context to the argument. Statistics are a very important element to the discussion but ultimately the NFL is a business and businesses always come down to money. Success in the NFL is ultimately decided by getting the best bang for your buck, extracting the best value out of your players is a proven indicator of success, just ask the New England Patriots. So how does this tie into the Steelers and Boswell? Well, heading into the 2018 season, the team rewarded their kicker with a four year, $16.8 million, working out to an average of $4,201,500 per year.

In the chart below, I compared the field goal percentage of the kickers charted previously and compared it to their avg $/year. (Note: numbers were provided by Over The Cap and the chart was made before the Jacksonville Jaguars signed Josh Lambo to a four-year, $15.5 million deal.) 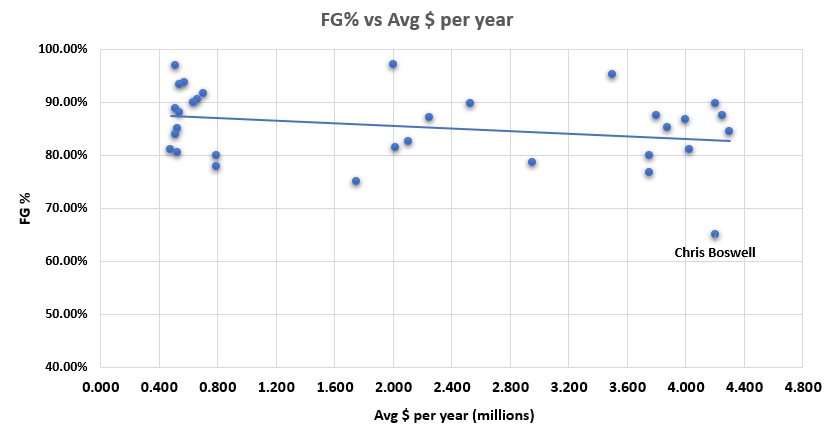 It is another ugly reflection of Boswell’s performance in 2018, especially when compared to his salary. Boswell has the third highest average salary per year, yet he did not return that value for the Steelers in 2018. He is once again far from the average and miles away from being close to good value.

Majority of the kickers making more than $3 million per year on average returned great value for their ability, with the lone extreme outlier being Boswell. Another interesting detail to note is the amount of kickers on the very left who converted 80-percent or more of their field goal attempts at a relatively cheap rate. This is relevant for the Steelers as they are set to pay Boswell a $2 million roster bonus in March but have spoken of their intentions to bring in competition for their struggling kicker. With the number of young kickers who have been successful while playing on rookie deals, perhaps cutting ties with Boswell and going into an open competition with fresh faces is an option worth considering.

Determining that Boswell was very likely the worst kicker in the NFL in terms of his production for the 2018 season should come as no shock. What is more important is that in a league that thrives on value, the Steelers also got the worst value for their dollar when it came to their struggling kicker.