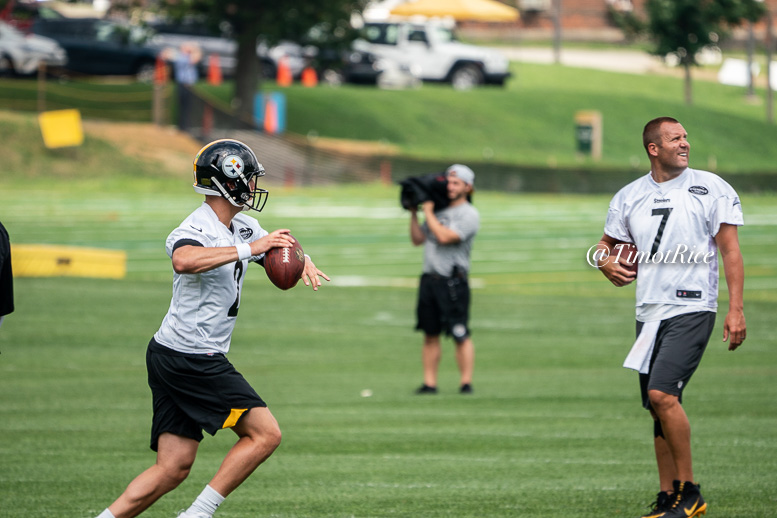 Kevin Colbert isn’t sure who will function as Ben Roethlisberger’s backup in 2019. But he likes both options he has. Asked about the progression of Josh Dobbs and Mason Rudolph during his Combine presser, Colbert praised both players for the job they’ve done and the bright future they have.

“Josh Dobbs did an awesome job last year,” Colbert started off by saying. “He forced his way onto the roster and into the #2 spot with his play in the preseason. He made a few big plays during the season. The play he made in Baltimore, throwing out of the end zone basically, gave us a big first down which helped us win that game.”

Dobbs attempted passes in three games: briefly filling in for Ben Roethlisberger against Baltimore, mop-up duty against Carolina, and the second half versus Oakland.

As Colbert referenced, the throw Dobbs made to JuJu Smith-Schuster versus the Ravens was a great one. A combination of poise and accuracy where only his receiver could get it.

Oakland was a different story. Dobbs struggled to move the offense an inch, inaccurate with his passes and off with his ball placement. We recapped some of his issues the following week.

He finished the year 6/12 for 43 yards, no touchdowns, and an interception.

“Mason Rudolph had a really good preseason albeit for some typical rookie mistakes. If you look at his statistics over the course of the preseason, he was very good.”

Rudolph didn’t record a snap during his rookie year but that was pretty much the plan all along. During the preseason, he completed 54% of his passes, threw for more than 300 yards, and tossed three touchdowns compared to one interception. A lack of mobility did hurt him, however, sacked seven times in just over 50 dropbacks.

Moving forward, Colbert believes there will be a strong competition between the two talented youngsters.

“It’s great to have two young quarterbacks in the waiting. It’s not only good for us but it’s good for them. The less they have to play at a young age, usually the better their careers are. We think we have two young guys who can develop.”

It’s fair to hope that Rudolph leaps Dobbs as the #2 next year. Failing to do so would signal cause for concern. But the job won’t be handed to him, just as Dobbs’ roster odds seemed murky leading up to the preseason finale and roster cutdowns. Rudolph will have to earn it.