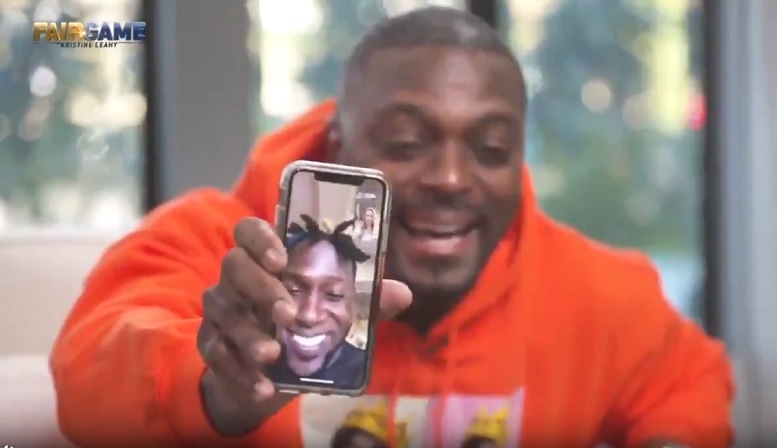 Former NFL wide receiver Plaxico Burress was a guest recently on ‘Fair Game’ on FS1 and host Kristine Leahy conducted a great interview with him that included him being asked several questions about a former teammate of his when he was with the Pittsburgh Steelers, wide receiver Antonio Brown.

When asked about Brown and if the stories about him being selfish are true, Burress smiled before finally giving Leahy an answer.

Today on Fair Game, @plaxicoburress called @AB84 the hardest working man he’s ever met in his life, and then FaceTimed him on the show. 👀 Click on the link in the corner to watch more of Plaxico’s interview on our YouTube channel. pic.twitter.com/9wl1RzOEa1

“Us receivers, we can be a little, you know, I don’t know, brash or whatever you want to call it,” Burress said. “We all kind of get this stigma, or whatever, maybe the stereotype that we’re selfish. I don’t think Antonio’s selfish. I had the opportunity to play with him in 2012 and 2013 back in Pittsburgh and he’s the hardest working man I’ve ever been around in my life, ever.”

When asked to give examples of how hard of worker Brown is, Burress didn’t take long to give a reply.

“We would get to practice and he’d be running so fast and working so hard and I’m like, ‘AB, man, listen, it’s just Wednesday. You need to slow down and relax.’ And he’s like, ‘There’s nothing like dominating another grown man.’ I’m like, ‘All right, we’ll keep going, it’s just practice. It’s only Wednesday, if you want to dominate on Wednesday, keep going,'” Burress recalled.

Burress was then asked if he thinks the Steelers almost have to trade Brown this offseason based on his own first-hand knowledge of how the team’s locker room works and how the organization is run.

“I don’t know,” Burress replied. “But for Mr. Rooney to come out and say the Antonio would not be in training camp this summer and knowing the Steelers organization and knowing the gold standard that they set, that kind of bothered me a little bit. Because I’ve never heard Mr. Rooney come out say something like that, especially about a caliber of player like Antonio Brown. So, there has to be something behind it. I would like to see him finish his career in Pittsburgh, but you just never know as the business part of it, it gets tricky sometimes.”

Burress was then asked if he thinks a fresh start might be good for Brown and that’s when the retired wide receiver let it be known that he might know quite a few more details than what is currently out there in the media.

“I think everybody needs a fresh start I think that relationship between Antonio and the organization may have ran its course,” Burress said. “I’m not in the locker room, but I do speak to Antonio often. I’m not going to just give you the whole juicy story.”

Burress, at the urging of Leahy, then Facetimed Brown on his phone. After a short non-revealing discussion between the three took place, Burress was urged by his interviewer to reveal more details on where Brown might wind up this offseason to her at a future date.

“I already know all the juice, I just cant give it,” Burress said.

While the interview with him then moved on to other topics, Burress was later asked by Leahy to predict where Brown will play in 2019.

“I don’t know, I’m going to go out on a limb and say Indianapolis,” Burress said.

It sounds like Burress has a lot of information on Brown that he’s keeping to him self and with him also still being close friends with Steelers quarterback Ben Roethlisberger, Burress probably knows what happened during that last regular season walk-through practice that resulted in Brown going AWOL and him not communicating with the organization ever since. Will he spill the beans on that top-secret stuff in the near future? We’ll see.