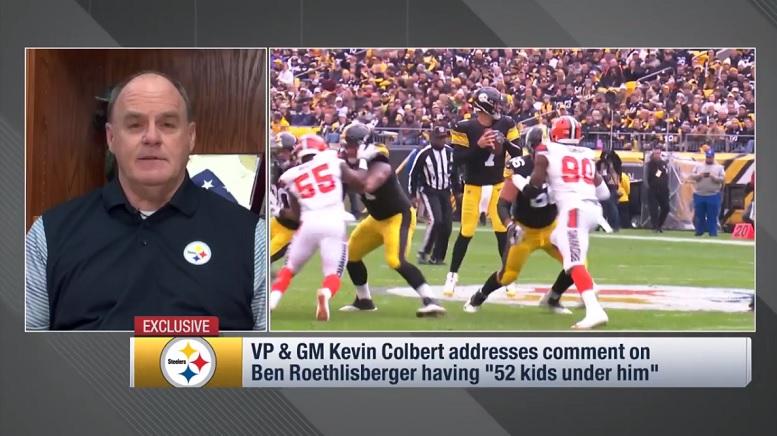 Pittsburgh Steelers general manager Kevin Colbert seemingly made a lot of waves a few days ago with comments he made about quarterback Ben Roethlisberger when asked if he has any problem with the player being publicly critical of his teammates and thus if he wishes he would be quieter.During his Friday interview on the NFL Network, Colbert was asked to clarify a few of the comments he made this past week when describing Roethlisberger as the team’s unquestioned leader.

First, Colbert was asked about him saying a few days ago that Roethlisberger essentially oversees “52 kids” underneath the quarterback every season and what he meant by that.

“In referencing to our younger players, what I was referencing is, Ben is the only player that’s ever won a Super Bowl with the Pittsburgh Steelers,” Colbert explained. “And we have a few people, few of our players were on the team, Antonio [Brown] included, when unfortunately we lost to the Green Bay Packers. Antonio, and of course Maurkice was on that team as well – Maurkice Pouncey. So I was referencing the younger players on our team and their lack of experience in a Super Bowl-winning environment. And Ben’s really the only one that can say that he has done that.

“So I think there’s tremendous value in that. Does that mean that we have got a bunch of juveniles or anything like that? No, of course not. We got some really good veteran players like a Cam Heyward or a Maurkice Pouncey, who are unquestionable leaders as well, but they’re still not the Super Bowl winning type of player that Ben Roethlisberger is. And that’s why he is and will continue to be the unquestioned leader of this team. And I still think it would be valuable for all of our players to recognize that and not only ask Ben about that experience, but also try to help him get us all back to that Super Bowl win.”

Colbert was then asked if he had spoken to some of those veteran players that he just mentioned since he made his comments a few days ago and if any of them expressed any feelings about his “52 kids” analogy.

“Yeah, we speak constantly, Colbert said. “After the season, I sat down with Maurkice, I sat down with Cam, I sat down with David DeCastro. As Coach [Mike] Tomlin does his exit interviews, I will usually follow up and talk to the players as well and give them my perspective and ask them for their perspective. Because we trust them, we trust what they do, what they see, what they feel, when they are not only in the game, but in the locker room and the preparation and the meetings. And they can be honest with us. We can exchange freely as to their feelings and we value their opinions, quite honestly, because they live in that moment. And again, no one’s lived in that moment more than Ben, so I’ll value that tremendously.”

Not surprisingly, Colbert was also asked on Friday if the team has different standards for Roethlisberger like wide receiver Antonio Brown suggested last week.

“No, there aren’t,” Colbert said. “Ben is, again, he’s recognized as who he is and what he’s done. As is Antonio. Antonio Brown is an excellent, tremendous football player, tremendous competitor, tremendous practice player. And there’s mutual respect with all of them. And, no, Ben doesn’t have the authority of the head coach. Coach Tomlin is in charge of this team over anybody, especially once they get into that locker room, in those meeting rooms and on the field. And Ben, of course, respects that more than anybody.

“Is he going to say some things to some players outside of that? Sure, as he should. He’s the leader and we respect that. But, in no means is anybody in charge of this team except Coach Tomlin once they get into the field and into the practice situations they’re given. You’d said, and you’d said that you told Antonio Brown that you wouldn’t trade him unless it’s a situation that’s beneficial for the Steelers.”

It’s sad that Colbert had to contextualize his own comments that he made about Roethlisberger a few days after making them and while his choice of an analogy wasn’t great when he referred to the quarterback as overseeing 52 kids, I’m sure most clear-minded and level-headed Steelers fans and media members understood what he was getting at.

Obviously, Colbert probably isnt done having to talk about the recent comments he made about Roethlisberger and how he’s fine with his leadership style. In fact, despite him attempting to contextualize his own comments on Friday, he’ll likely be asked to do more of that when he addresses the media again during his Wednesday press conference at the scouting combine in Indianapolis. Stay tuned to the site for that recap.