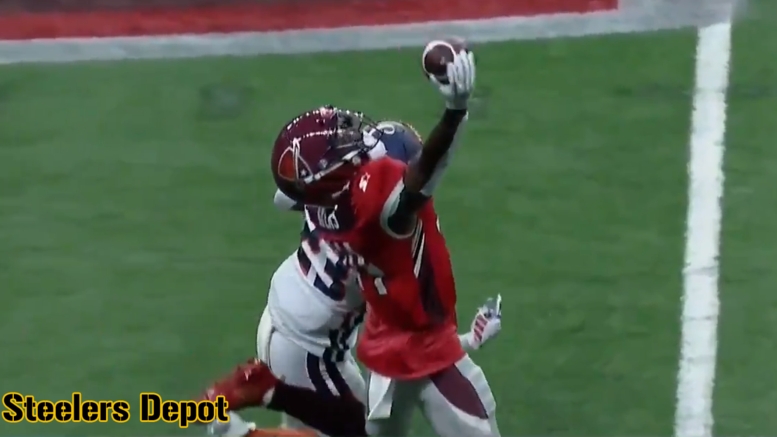 As I have laid out previously, there are a lot of players in the Alliance of American Football right now who have had previous ties to the Pittsburgh Steelers, some more than others. One of the more significant connections is De’Marcus Ayers, now a wide receiver for the San Antonio Commanders who was a seventh-round pick for Pittsburgh in 2016.

Ayers spent much of that season on the practice squad in spite of the fact that the Steelers had injury issues at the wide receiver position, as well as a year-long suspension that they were dealing with thanks to Martavis Bryant. But he did get called up late in the year, and he finished with six catches for 53 yards and a touchdown, most of which came in the regular season finale with Landry Jones at quarterback.

Still, in spite of the promise that he showed, the Steelers released him during the final roster cuts the following season. Ayers declined to accept another offer to join the team’s practice squad, instead signing with the New England Patriots’ practice squad, but he was released after a few weeks. He was later signed to the Chicago Bears’ practice squad and was re-signed to a futures deal, but did not make the roster in 2018.

But he is on a roster now, and after he was a gameday inactive for the Commanders during their opening game, he dressed yesterday, and made an impact—an impressive one at that. Ayers caught five passes in the game for a total of 80 yards, but the highlight was a beautiful one-handed catch over the shoulder for 28 yards.

The bad news is that the Commanders still lost the game, in part thanks to Orlando Apollos quarterback Garrett Gilbert, who recorded the first 300-yard game in AAF history, in fact throwing for nearly 400 yards. Charles Johnson, another former NFL wide receiver, contributed with seven catches for 192 yards and a touchdown in Orlando’s 37-29 win.

But there is good news, too. In San Antonio’s first home game, they drew a reported crowd of nearly 30,000. The league will need to retain attendance and viewership of their games, of course, if they have any hope of having staying power.

It helps to have highlight reel plays to feature over and over again, as well as name recognition, and Ayers is hoping to make a name for himself with such plays. Of course, his end game is to make it back into the NFL, which he may well do, but in the meantime, he is helping out the Commanders, and the AAF as a whole, with his on-field performance.