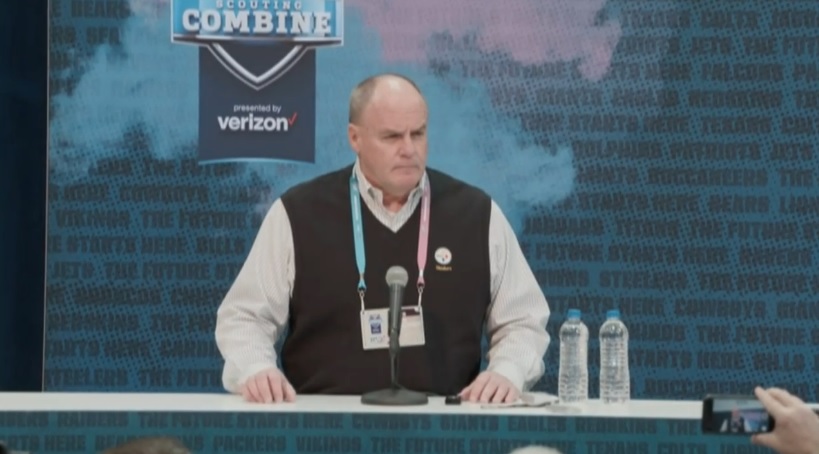 While the Pittsburgh Steelers defense did manage to register over 100 sacks over the course of the last two seasons, during that same span of 32 regular season games the team has managed to register just 37 total takeaways with a few of those coming courtesy of their special teams units. Last season, the Steelers defense was especially brutal when it came to being able to take away the football from opposing offenses as only 15 were registered and just 3 in the team’s final six  games. Steelers general manager Kevin Colbert acknowledged Wednesday while in Indianapolis for this year’s scouting combine that the team is probably going to have to add some defensive playmakers this offseason in an effort to hope that more takeaways are registered in 2019 as a result.

“Look, we’ve sacked the quarterback at a very good rate, but our takeaways are not very good at all,” Colbert said Wednesday, according to Bob Labriola of steelers.com. “It’s really reflective on the players we have back there. What we want to look at, what we want to value looking forward is, let’s value the takeaway-capable guys who have shown they’ve been able to do that in college.

“Our game has always been about getting physical players who can come off the edge and close off the edge and make a tackle. But are they doing that at the expense of not making plays on the football? We have to maybe try to find that balance and maybe be more open to the concept that the game is constantly changing and if you want playmakers in the back end, then find someone who has done it.”

There are two ways for the Steelers to add defensive playmakers this offseason and that’s via free agency, via a trade, or via the draft. With that said, the Steelers aren’t normally big splash-makers when it comes to free agency and trades and even though the team does have a little bit more salary cap space to work with this year than they normally do, it still doesn’t necessarily mean we’ll see them go crazy with defensive signings at the linebacker, cornerback and safety positions. In short, the Steelers will likely rely heavily on the draft once again to find players who were able to register takeaways in college.

However, even though a player may have registered interceptions during their college careers doesn’t necessarily mean they’ll be able to do the same at the NFL level and the Steelers former first-round draft pick, cornerback Artie Burns, is the most-recent perfect example of that. Burns, who registered 7 total interceptions during his college career at Miami, has only managed 4 so far during his first three seasons in the NFL with 3 of those coming during his 2016 rookie season.

“You would think that it would,” said Colbert about college statistics being an indicator of NFL production, according to Labriola “but sometimes it does, and sometimes it doesn’t. Artie Burns had five great interceptions (among his total of six) as a senior at Miami, and right now Artie is trying to find his game. He had more interceptions than all but one other cornerback in that draft that year. You hoped that would transfer and early it showed that it might, but right now he has to re-find it.”

Burns’ defensive play got so bad last season that he was benched after Week 6 in favor of journeyman cornerback Coty Sensabaugh and he barely played any defensive snaps in the team’s final 10 games to boot. While the Steelers will likely take Burns to training camp with them this year after likely not picking up his 2020 fifth-year option this offseason, he’ll need to show he can rebound if he’s going to make the final 53-man roster.

If the Steelers are indeed looking for a defensive back in the first few rounds of this year’s draft who showed during his college career he could register interceptions than they should take a very close look at Florida safety Chauncey Gardner-Johnson or Washington cornerback Byron Murphy. Gardner-Johnson registered 9 interceptions during his three seasons at Florida while Murphy registered 7 in his last two seasons. Additionally, two other top-rated cornerbacks in this year’s draft class, Georgia Deandre Baker and LSU’s Greedy Williams, registered 7 and 8 interceptions, respectively during their college careers.

We’ll know come draft time whether or not the Steelers were able to add a defensive playmaker who has shown the ability to register takeaways at the NFL level. If they don’t go that route, however, Colbert would be best served addressing that need somewhere in the first two rounds of this year’s draft, or even in both.