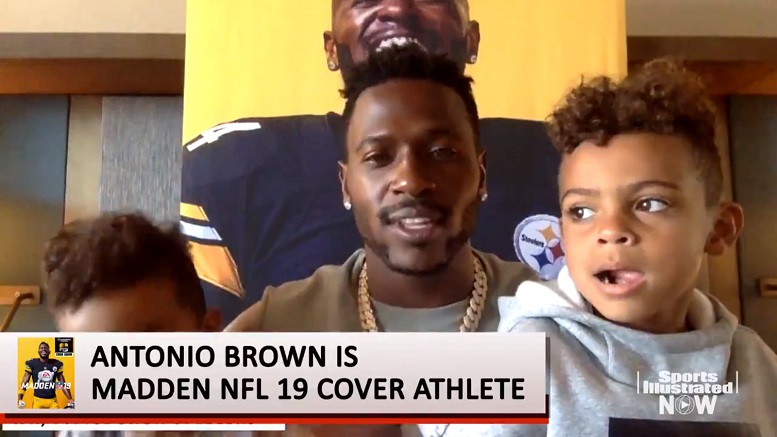 I think it’s fair to say that Pittsburgh Steelers wide receiver Antonio Brown has a love/hate relationship with attention, and with the media, and the more that he gets for the things that go on off the field and in his personal life, the more odd his behavior becomes. His mustache even becomes blonde like Hulk Hogan for some reason.

In the midst of his latest off-field headlines, stemming from his going AWOL in the final week of the season and his subsequent flirtations with other teams and hints at interviews, he finds himself in yet another headline hitting very literally close to home.

We learned a few days ago that there was a domestic dispute at his residence involving the mother of one of his children. According to the police report, the mother insisted on money to pay for their daughter’s haircut, refusing to leave the premises, which ultimately led Brown to put hands on her in some fashion that led to her falling backward.

There isn’t enough information to go on regarding the physical aspect of the confrontation, but Brown and his lawyers believe that it vindicates him to such a degree that he has chosen to file for majority custody of his daughter. In a statement, in part, issued by his lawyer:

“Mr. Brown reacted appropriately and without and incidia of violence the Mother inappropriately involved their minor child by creating an unnecessary scene at Mr. Brown’s residence wherein she demanded funds from Mr. Brown, despite the fact that he provides substantial financial child support to the Mother.

“The Mother recently sought, and was Denied, additional child support by the Court as it properly found that the substantial child support paid by Mr. Brown cover their child’s needs. Given the egregiousness of the Mother’s recent actions, Mr. Brown has taken legal action this week to ensure that his daughter is protected by seeking majority timesharing and decision-making authority.

“Mr. Brown loves his daughter and the recent unwarranted press in connection with the Mother’s appalling actions is a travesty for his daughter, who remains and will always be his first and foremost priority”.

In other words, Brown is using the incident as grounds to take more control in terms of time in care and in making life decisions pertaining his daughter from the child’s mother. A cynic might say that this move is motivated by public relations, but honestly I’m not quite that cynical.

Regardless of all this, the entire incident has not resulted in Brown coming out looking good for the vast majority of people, many of whom have taken it as a ‘final straw’ of sorts. For many, it might hinge upon the nature of the physicality described in the police report, which his lawyer claims was “immediately recanted”.

Jaclyn Soroka, Antonio Brown’s family attorney, says in statement to ESPN that Brown has filed for custody of his daughter in light of the domestic incident with the mother of Brown’s child. pic.twitter.com/A8OnVIsZ3o