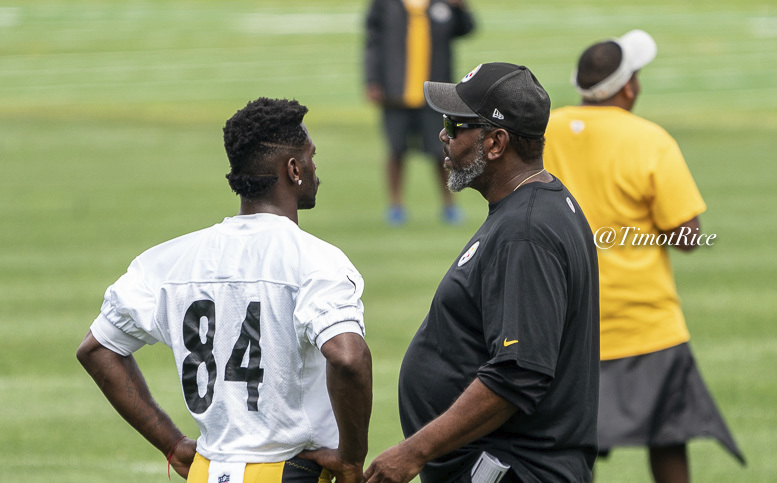 Question: Will Antonio Brown play the good soldier until he’s shipped out of town?

Who knows how long this has been building up. While not all of Antonio Brown’s erratic behavior—such as throwing furniture, speeding, or avoidable baby mama drama—can be attributed to his frustrations with the Steelers, I think it’s fair to wonder in hindsight how much such things have played a role in shaping his personality and its gradual evolution over the years.

It obviously reached a boiling point this past season, highlighted by in-season issues such as Ben Roethlisberger’s criticism of his route-running on a game-ending interception and Mike Tomlin’s insinuation that he quit on the team after he went AWOL until Sunday of the regular season finale.

Since that time, Brown has done quite a lot of make a spectacle of himself, largely doing so on social media, in what at least is fair to wonder was a loosely coordinated campaign to force the Steelers to take his desire to be traded seriously.

Now that they have, and he is presumably going to get his way, does that mean that the blonde-mustache-fueled antics will cease as well? The Steelers reportedly ‘advised’ him to stop hurting his trade value, which is obviously a strong indication that the team intends to trade him.

They also provided him with the disincentive of electing not to trade him if he continues to act in certain ways that could diminish his desirability to other teams by making it clear to him that they will only make a trade that makes sense for the franchise, which means getting appropriate compensation for an All-Pro wide receiver.

Ultimately, it doesn’t matter much how he behaves from here on out because he in all likelihood won’t be the Steelers’ problem in 2019 unless they play against him. It might have a slight effect on what they get back for him, but that’s about it. He can go be crazy in another city.