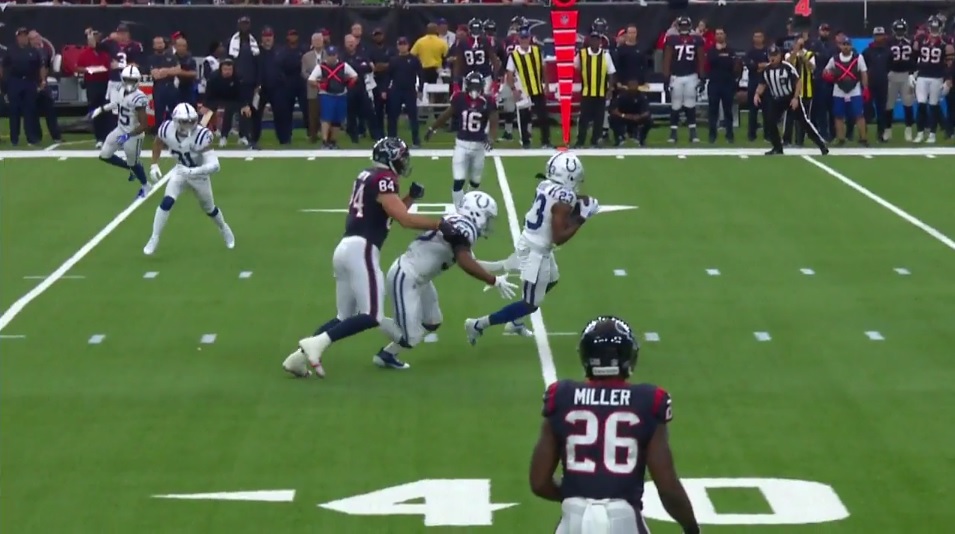 All season long, I’ve discussed the Pittsburgh Steelers problems in matching up versus empty. Not that facing an empty backfield is easy for any defense, it’s not, but I’d confidently bet the Steelers are among one of the worst teams in stopping it. Check the receipts. Off the top of my head, this year alone, I dedicated three articles to the topic.

So what’s the right answer? There isn’t a one-size-fits-all but as Dan Orlovsky excellently pointed out in a tape breakdown Thursday afternoon, there are ways to win.

Orlovsky breaks down an interception by the Indianapolis Colts defense in their Wild Card victory over the Houston Texans last Sunday. Houston aligns in empty. In response, the Colts appear to play man coverage. Linebacker walks out on the back and the corner follows the motion, two indications it’s man coverage.

Instead, on the snap, it becomes zone. Deshaun Watson is confused by the coverage and throws a pick to corner Kenny Moore. Great call and execution by the defense.

When can I get that into Keith Butler’s playbook?

As Orlovsky points out, and as we talked about in one of the rare moments the Steelers disguised their look – Joe Haden’s interception against the New England Patriots – it was that deception that led to the big play. Beating QBs isn’t just about getting pressure on them. It’s about creating confusion, which forces them to hold onto the ball and make hurried, pressured throws. It’s about creating those critical tendency breakers so your defense doesn’t become predictable and easy to read. These aren’t things you’re going to do all the time. Yes, sometimes you’re going to line up in a predictable look and hope your talent wins out. It’s 2019 – offenses are going to win a lot of the battles.

Simply put. We haven’t seen enough of that from this Steelers’ unit. And until it changes, or they hit triple 7’s on some draft picks, the results will remain like this defense.