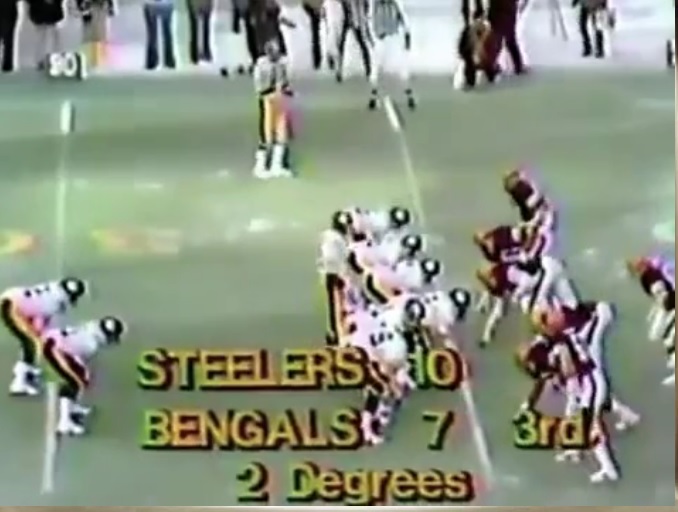 Hope you all are staying indoors today. The temps Wednesday are one of those “NOPE!” days where if you can avoid venturing outside, you do it. Today is going to be one of the coldest afternoons of the year so with that in mind, thought it was appropriate to revisit the coldest game the Pittsburgh Steelers have ever played in.

It’s 1977. The Steelers are traveling to Cincinnati. Where it’s two degrees for kickoff. Pack your sweater.

That’s the Monday headline from the now defunct Pittsburgh Press, recapping the miserable day in both conditions and outcome. It wasn’t just the bitter cold that stung this team. It was a critical end-of-season loss to Cincinnati, nearly dashing the Steelers’ playoff hopes.

1977 looked like another missed opportunity after getting an injury riddled team saw themselves bounced in the AFC Title game the year before. A Week 8 loss evened their record to 4-4. But as they normally did in the 70s, and did the year before, the defense carrying an offense that might as well not existed, Pittsburgh bounced back. This time though, the offense carried the team on its shoulders.

A 35-31 shootout win over Cleveland, Terry Bradshaw tossing three combined touchdowns to Lynn Swann and John Stallworth. A 15 point victory over Roger Stabauch’s Cowboys – Pittsburgh ran the ball 47 times that day – edging out the hapless Jets and finally, a 30-20 victory over the Seattle Seahawks where they unveiled their “2-6 defense” for the first time.

That win streak pushed the Steelers to an 8-4 record. Still far from assured a playoff spot. Next up on the schedule were the Cincinnati Bengals, rallying from their own 4-5 record to rack up three straight victories. Beat Pittsburgh and they’d take control of the AFC Central.

Kickoff was slated for 1 PM at Riverfront Stadium, essentially a baseball field built in 1970 for the Cincinnati Reds and would eventually be host of the second coldest game ever, the Chargers/Bengals Freezer Bowl five years later. From what I can gather, the two degree kickoff temps made it the third coldest game at the time, trailing only a 1972 matchup against the Bears and Vikings and of course, The Ice Bowl ten years prior.

Here’s how the Press set the scene. It wasn’t pretty.

“The field conditions at gametime were miserable. It was clear, but the temperature an hour before kickoff was two degrees above zero…the entire artificial surface was frozen and made pellets made from cow’s urine were used in an attempt to melt patches of ice. One end zone was covered with ice and boundary markings were painted over the ice. Several of the Cincinnati players were wearing panty hose presumably for warmth purposes.”

Reporters covering the game didn’t have it any easier just because they sat in the press box, either.

“The press box was a mess because of pipes which broke Friday and allowed a foot of water to cover the floor.”

The field was a disaster. Ice was still all over the field, well into the second half and you would’ve needed three foot cleats to find any traction. The Cincinnati grounds crew opted against placing a tarp over the field the night before because, according to the broadcast, they were fearful of it sticking to the astroturf, which made the field nearly a literal sheet of ice. 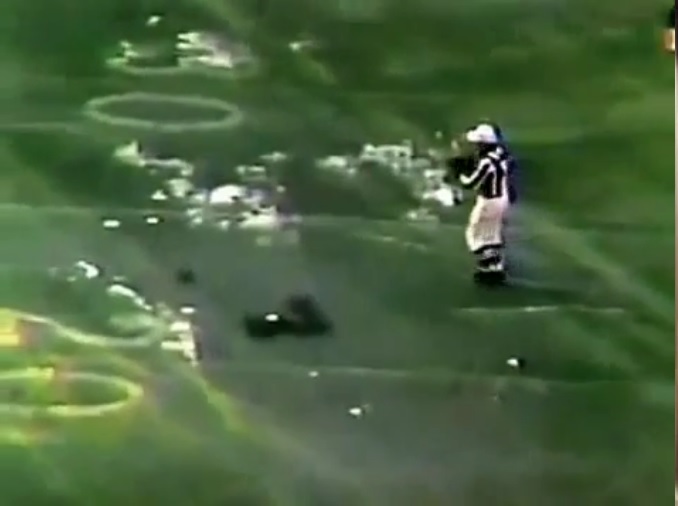 Pittsburgh’s offense began like the weather – frozen. Terry Bradshaw attempted his first pass of the game on 3rd and 6 of the opening drive. Intended for Swann along the right sideline, the throw missed, and pick-sixed by Bengals’ stud corner Lemar Parrish for a 47 yard touchdown barely more than 90 seconds into the game.

Wising up, the Steelers used the ground game throughout the rest of the first half, weathering a Rocky Bleier fumble and Joe Greene unsportsmanlike conduct (he threw a football at a Bengals’ head) on their next possession. They relied on Franco Harris’ legs, rushing for 101 yards in the first half alone and tying the game up with a five yard plunge on the first play of the second quarter.

Ernie Holmes knocked Bengals’ quarterback Ken Anderson out of the game early in the second quarter and it seemed like the Steelers were in control. Swann made an acrobatic catch on 4th and 11 from the Bengals 27 and though they didn’t find the end zone, took a 10-7 halftime lead thanks to Roy Gerela’s 32 yard boot.

Pittsburgh racked up 240 yards of offense. Cincinnati? Hardly more than 100. Just eight of those were found on the ground. If only football was a 30 minute game.

Anderson’s second half return coupled with the Steelers repeatedly punching themselves in the face, three second half turnovers, turned the tide. Frozen solid, the ball like a lead balloon, taking even a simple toss proved to be a monumental task. Attempting to secure the Bradshaw pitch, Harris fumbled on the Bengals 30, stalling out a drive that could’ve ended the game right there, considering the weather and general ineptitude of Cincinnati’s offense.

That gave the Bengals their first life since Parrish’s pick six at the start of the game. Anderson connected with Billy Brooks for a 57 yard completion down to Pittsburgh’s 13. The defense held but the drive ended in a short field goal, knotting the game at 10.

Jim Smith fumbled away the ensuing kickoff, a critical moment of the game, setting up an Anderson to Pat McInally 43 yard score on the first play following the turnover. Anderson was crushed on the play, could barely get off the field, but still torched Pittsburgh’s secondary for 303 yards that day.

In a span of 13 seconds, Cincy went from being down three to up seven and the Steelers, probably bordering on frostbite at this point, packed it in.

Harris fumbled again in Bengals’ territory midway through the fourth quarter. Cincinnati slogged its way downfield and set up for a field goal to try and make it a two-score game, but the snap was terrible, literally rolling to the holder, and the kick clanked off the uprights.

Pittsburgh sputtered on their final drives. With time running out and on the Bengals 43, Bradshaw’s 4th down shot to an open Stallworth fell incomplete and the game, mercifully, was over. Saddled with a loss, the Steelers were outside looking in.

Unlike 2018 though, they got the help they needed. Taking care of business in the regular season finale, they beat the San Diego Chargers 10-9 while the Bengals dropped their last game, losing by five to Houston. It earned Pittsburgh the AFC Central and playoff spot though they were quickly dispatched by Denver in round one, turnovers again were the problem, losing 34-21.

That Sunday in Cincinnati was a total disaster. In score, of course, but to watch the game is to watch a comedy of errors. Every play was unpredictable. A long, second-half completion to Brooks saw Donnie Shell hopelessly slip, Glen Edwards hilariously miss, Loren Towes strip the ball out, Jack Ham unable to find footing to pick it up, the ball finally recovered by Jimmy Allen, who looks Bambi finally falling down in the middle of his runback.

Oh yeah, Allen – born and raised in LA, by the way – wore this facemask of nightmares underneath his helmet. 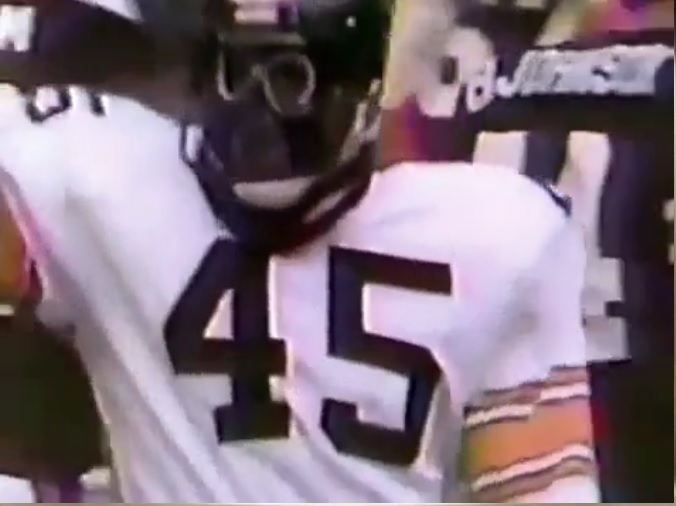 Photos in the Press summed everything up. Franco on a knee, Tony Dungy freezing on the bench, and the ballboy fusing into his team-issued jacket.

So if you’re walking to your car today, need to dash to the grocery store parking lot, or take five minutes to pump gas in this frigid weather, take solace in one thing. At least you’re not playing football in it.