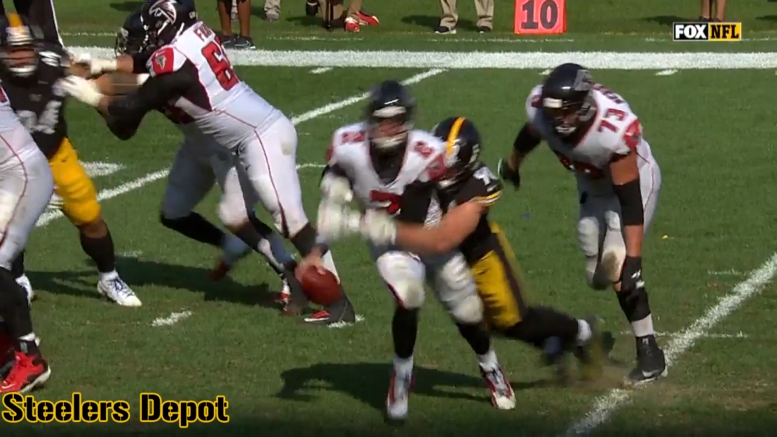 The Pittsburgh Steelers lost an impact linebacker in 2017 when Ryan Shazier suffered a spinal injury in December. The future of his playing career is in jeopardy, though he continues to devote himself to the goal of being able to return to the field.

But has another impact linebacker emerged in his stead? In his second season, edge defender T.J. Watt recorded six forced fumbles, the vast majority of them coming on strip sacks. Only two of them were recovered, if memory serves, so he only technically produced two turnovers, but he is creating the opportunity to get takeaways, something this unit badly needs.

In recent franchise history, there have only been two great players in the art of the strip sack: James Harrison and Greg Lloyd. Between them, they accounted for all five seasons in team history since 1988 in which a player produced at least six forced fumbles—until Watt recorded the sixth such season in 2018.

“I don’t know” what the key to the strip sack is, Watt admitted recently to Missi Matthews during a sit-down interview in which he participated for the team website. While he might not know exactly how he’s doing it right now, however, the fact remains that he is.

“I’m still learning it too. Quarterbacks don’t necessarily hold the ball super secure”, he said. “Especially when they’re in the pocket, they’re trying to throw, so I’m—that’s another thing, from the left side I can see, even if the ball is [something] I can still see it, so I’ll just try to knock the ball out”.

We saw him do this often enough last season. He produced multiple forced fumbles in two games last season, against the Jacksonville Jaguars and in the season finale against the Cincinnati Bengals. He had strip sacks of Matt Ryan (recovered in the end zone for a touchdown) and of Cam Newton as well over the course of the year.

“You still get the sack stat so that’s not a problem”, he said in a tongue in cheek fashion about the fact that you can knock the ball out without actually bringing the quarterback to the ground, “and you also create a chance for a turnover for the defense”.

Harrison was a master at the tomahawk technique of punching the football out. I can’t help but wonder if he spent much of any time working with Watt to show him how that move works during the 2017 season.

Of course, having a season with six forced fumbles is nice, but if he is really going to be an impact player in that regard, he is going to have to show that he can do it again. Both Harrison and Lloyd had at least four seasons in which they forced five or more fumbles. Watt is up to one so far.