While as a collective unit, 2018 was not the year the Pittsburgh Steelers were aiming for, it was a great year to be a tight end for the team. Both Vance McDonald and Jesse James enjoyed career seasons on route to accomplishing a feat so great that it has stood the test of time over two and a half decades.

Eric Green and Adrian Cooper eclipsed 1000 receiving yards as tight ends for the Steelers in 1993 with Green recording 942 yards himself. Since then, no group of tight ends have broken the 1000-yard barrier since McDonald and James did so this season.

Including Xavier Grimble, the Steelers’ tight ends recorded 1119 receiving yards this season which blows past any figure in recent memory, even surpassing numbers put up during the Heath Miller era. 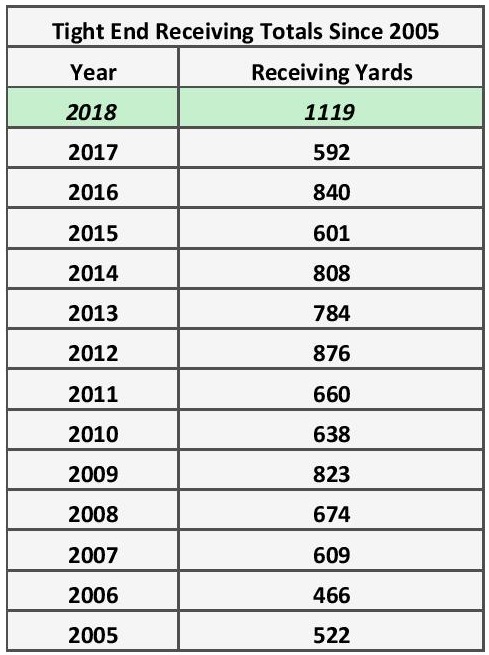 Now there is no direction correlation available that links tight end receiving yards to team success. Besides, the Steelers missed the playoffs this season despite their success from the tight end position but it still is incredible to see the team extract production from another avenue.

Without Le’Veon Bell and Martavis Bryant this season, the Steelers were essentially missing 1258 receiving yards from their 2017 contributors. The tight ends helped ease that loss, stepping up and contributing 1119 yards this season, 527 more yards than the group contributed last season.

The Steelers have to like where they are with the position as McDonald showed that he can be a game changer when healthy. The veteran tight end had career highs in receptions, receiving yards and catch percentage. James also quietly put together a career year and though he will be an unrestricted free agency in March, he gave the Steelers plenty of reasons to warrant a return.

While both tight ends showed that they can be productive options as receivers, their ability in the blocking department cannot be understated either, as both are gifted in that regard.

Whether the Steelers keep the duo together for another season and the extended future is impossible to answer at the current moment. Though, James has already stated that his love for the team will weigh in on his decision making.