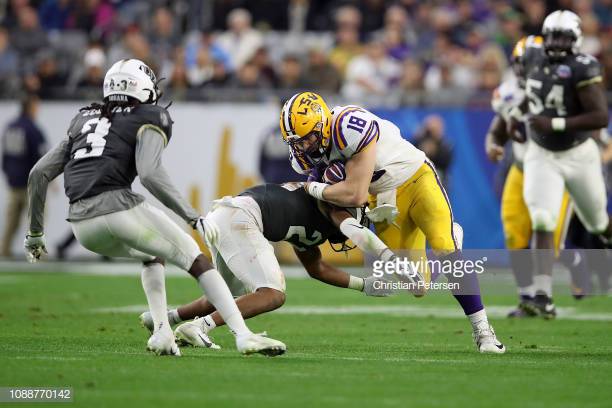 Unfortunately, not much news for us to share with you regarding today’s practice at the Senior Bowl. Last night, they announced Wednesday’s practice would be moved indoors and due to limited space, closed off to members of the media. Even the NFL Network crew wouldn’t be allowed to film while teams were only allowed two club members to attend practice. Safe to assume the Pittsburgh Steelers sent Mike Tomlin and Kevin Colbert.

So being a little starved for information, one nugget to pass along. The team reportedly interviewed LSU tight end Foster Moreau, according to this tweet/report from Matt Verderame.

LSU tight end Foster Moreau grabbed by the #Steelers for an interview. He's impressed down here.

As Verderame’s tweet indicates, Moreau has enjoyed a good start to the week. NFL Draft Scout’s Rob Rang had him listed as a winner from Tuesday’s session.

As a senior, he caught 22 passes for 274 yards and two scores in the Tigers’ run first offense. Yesterday, he weighed in at 6’4 250 with nearly 34 inch arms, an impressive build and mold at the position the Steelers typically target. He served as an LSU captain throughout 2018 and started the last two seasons.

He’ll be playing with the North squad this week, wearing his LSU number of 18. Again, it’s just one meeting, and it’s unclear who it was with – probably a scout – and there will be lots of sitdowns throughout draft season. But he’s a name to file away and a player I’m sure we’ll profile in the near future.

In a deep tight end class, NFL Draft Scout has Moreau as the 11th best prospect and projected 5th to 6th round selection.