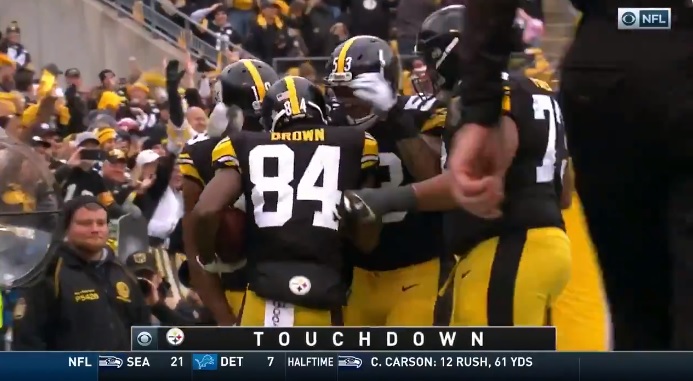 It seems like not a day goes by without some news about the Pittsburgh Steelers and Antonio Brown. Now we have Terrell Owens in the role as AB’s mentor. Owens is a Hall of Famer, was famous for keeping his body fabulously in shape, an all-time great wide receiver. But even at the height of his career; I never had any interest in Owens being a member of the Pittsburgh Steelers. As an average Steelers fan, I never even thought that the organization would consider trying to acquire him.

I always considered Owens to be a dedicated athlete. I remember when he had the broken bone in his leg and working to be able to play in the Philadelphia Eagles Super Bowl run in 2004. One of his five first team All-Pro seasons. Still, I would not have been interested in having Owens as a member of the Black & Gold.

As fantastic as a receiver as Owens was, he always seemed to be a disruptive influence on the teams he played for. He is 3rd all-time in receiving yards in the NFL. He had some strong supporters among his teammates over the years; but always something would happen to cause some sort of a controversy.

I have loved Antonio Brown in a Black and Gold uniform. I witnessed his game winning touchdown against the Baltimore Ravens firsthand on a Christmas Day in 2016. Heinz Field was rocking. Unbelievable effort to get the ball across the goal line as he was face masked and wrapped up by Baltimore defenders.

I saw him make an unbelievable sideline catch against the Green Bay Packers on a freezing Thursday night game. Everyone groaned when it was ruled incomplete. It didn’t seem possible that he could have gotten two feet down, but replay showed that indeed he did. I could go on and on with fantastic plays AB has made. I will always appreciate them.

My reason for not wanting Terrell Owens in a Steeler uniform and now thinking that maybe it is best if Art Rooney II does trade Antonio Brown is simple. As much as I am a fan of Antonio Brown; I am a Pittsburgh Steelers fan first. The team comes before the player for me. Terrell and now AB represent a player-centric side of football. After all, the players are the talent. Like a shift the NBA made decades ago. A league where the loss of one superstar player can end the playoff hopes of one franchise and make another an automatic contender.

Usually I am very anxious to find out the latest news and gossip about the Steelers. For the past few weeks, it has not been hard to find at all, but I am losing interest in reading about the Steelers lately. Every social media platform; sports radio, television is covering is blaring with the latest. AB unfollows the San Francisco 49ers then AB posts a photoshopped picture of him self in a 49ers uniform. Ironically, San Francisco is where Terrell Owens spent his first 7 seasons in the NFL before heading to “greener” pastures.

Then the news is why is Brown being made a scapegoat. It must be deeper than that. Ben Roethlisberger said he ran a poor route on a play. Its his fault. He shouldn’t say something so disrespectful. Mike Tomlin is the problem. He permitted Brown to come late to meetings. This caused all the problems. Many fans believe that the Steelers can’t win the Super Bowl without Brown. Many said the same about Le’Veon Bell. The Steelers never won a Super Bowl with them either. In fact, since AB came into the league eight other teams won the Super Bowl without AB and a 9th is about to next week.

Frankly, I don’t believe Ben has been disrespectful to Brown. In fact, almost every time I’ve ever heard Ben discuss AB it has been in a respectful way and would often try to defuse any controversy. By the way, back when Ben was getting in trouble, I was fine when the Steelers started shopping him for a trade. Don’t know if it was an empty threat or not but it was put out there. To paraphrase Ben at the time: “I can’t change what I’ve done in the past; but can only ask you to judge me on what I do from this point forward.” Ben got the message and seems to have been a model citizen since that time.

Tomlin probably should have handled AB differently. The biggest issue I see is that Tomlin tries to treat his players as men and expects them to be responsible for themselves. Maybe he did need to babysit AB more, but perhaps this me first attitude may have blossomed much earlier. Tomlin is not the perfect coach nor is he the all-time greatest. Still, I don’t believe he is to blame for the “Antonio Brown situation.”

There is one person, and one person only who is responsible for the situation and has the power to stop it whenever he wants. And that person is Antonio Brown. The question is whether he has the will and capability to change. He may not. Why should he? He has earned nearly $70 million and due even more on his contract. He can try to force a trade and he still will make more. There is no incentive for him to change his ways. As an average Steelers fan, I’ve had enough.

If Antonio Brown is on Pittsburgh’s roster, I will cheer like crazy when he plays. But frankly, I don’t care to hear any more of the nonsense. If he is on another team. I wish him all the best except of course where the Pittsburgh Steelers are concerned but certainly won’t be cheering for him.

He has helped this organization win games. He has not had enough impact to get the team to the Super Bowl. Setting himself against the team certainly does not help Pittsburgh reach their goal each season. The issue I see with AB is his inability to share the limelight. He is the G.O.A.T. and you can’t have some organization even the Pittsburgh Steelers dimming his glow by letting others shine. Too bad, he does not recognize that the more candles you have lit isn’t taking your glow away; it’s making the whole room brighter.

In the 2018 Memorial Day Weekend: Steelers Friday Night Five Questions, I committed to play songs that Steelers Depot respondents suggested might be the new Steelers anthem if Renegade by Styx was ever replaced. Here is entry 40 of 45 from Jeremy Miler: Bad Reputation by Joan Jett.