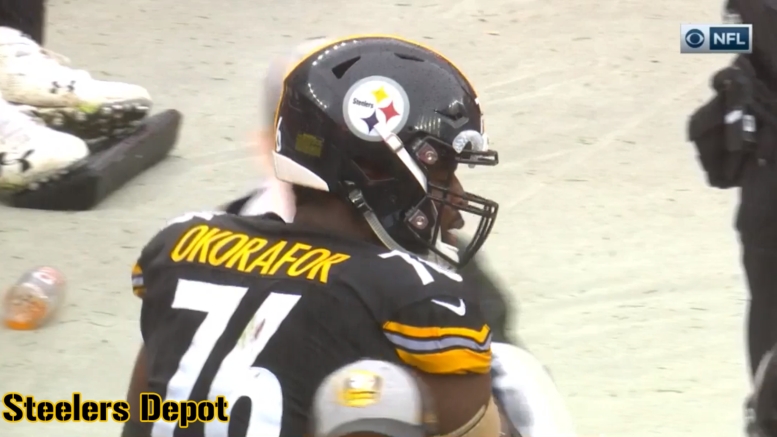 Okorafor’s role in 2019 is unclear. In theory, he could be anything from starter to third stringer. His role depends on his development, obviously, but also the front office’s decisions. Do they keep Marcus Gilbert, hope he gets healthy and can rebound to perform as the top five right tackle we’ve seen? Or do they cut bait, confident in what they have behind him in Okorafor and Matt Feiler. Right now, the former seems more likely, but who knows. Even if Gilbert stays, it’s no guarantee he stays healthy all year – it’s a good bet he won’t – so at some point, they’ll turn to their depth again.

Regardless, Okorafor will be battling Feiler in some capacity, be it starter or backup. Let’s shoot for the moon here. Assume he’s the Week One starting right tackle. What a difference it’ll be. Aside from his lone start against Denver as a rookie, we’ll get to that, he was mostly used as a tackle eligible. Better him than Feiler, though Feiler spent plenty of time as the right tackle, because he’s a more athletic tackle and functions better in that role.

What that meant was him playing in a ton of short-yard situations. Ones that required a sixth offensive linemen. 3rd and 1, 2nd and goal from the two yard line, where the scheme wasn’t complicated and half the time, it was an interior run where all Okorafor had to do was seal his man outside.

Consider this. Taking out the start in Denver for a second, over 21% of his other snaps came in the red zone. More than 13% of those inside the ten yard line. And the majority of the time, Pittsburgh was running the rock.

That in itself meant he didn’t play in much space. Even the few times he pass protected as the tackle eligible, he often got help. Be it the benefit of playaction, a chip, or back staying in to help out. This is a good rep against Jason Pierre-Paul but he’s aided by the playaction and release of Roosevelt Nix, keeping the DE inside enough for Okorafor to take control.

Even more obvious here from Nix, staying in to help.

Focus on the Denver game. For obvious reasons, he got plenty of help in his first start at right tackle against Von Miller and Bradley Chubb, two of the premier pass rushers in the AFC and the game. I covered it at the time but take these three plays, all happening back-to-back-to-back.

Okorafor is getting help from the back, the slide protection, and the tight end chipping. Reduced the space he needed to cover, gave him the extra time to protect Ben Roethlisberger.

But that can’t last forever. Training wheels gotta come off. Playing on the right side will always offer the benefit of the tight end forcing a wider release/chipping but Okorafor will be playing in much more space in the future when working as the right tackle. That’s going to be his challenge moving forward. It’ll be a weird feeling and a truer test of his capability.