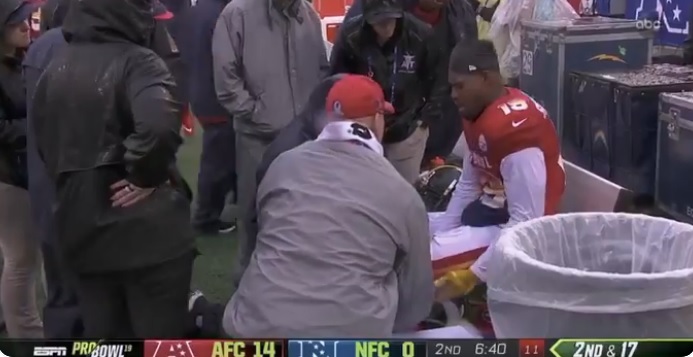 Pittsburgh Steelers wide receiver JuJu Smith-Schuster is having a busy Super Bowl week that’s including him making the media rounds in Atlanta, GA on Wednesday. During a Wednesday interview on Fox Sport’s ‘Undisputed,’ Smith-Schuster finally commented on the left knee that he injured during the first half of Sunday’s Pro Bowl game in Orlando, FL.

In a few other videos that Smith-Schuster has posted on social media since Sunday it doesn’t appear as though his left knee that he reportedly contused during the second quarter of the Pro Bowl isn’t causing him any issues whatsoever. The Steelers second-year wide receiver suffered his left knee injury while be tackled from behind by Seattle Seahawks linebacker Bobby Wagner following a short reception from Indianapolis Colts quarterback Andrew Luck.

After Smith-Schuster was tackled by Wagner, he immediately limped to the AFC sidelined and his left knee was quickly attended to by the team’s medical staff. It was later reported that Smith-Schuster was questionable to return to the Pro Bowl game due to a left knee contusion and he ultimately remained sidelined the rest of the game.

We’ll have more from what Smith-Schuster had to say during his Wednesday media rounds later in the day.