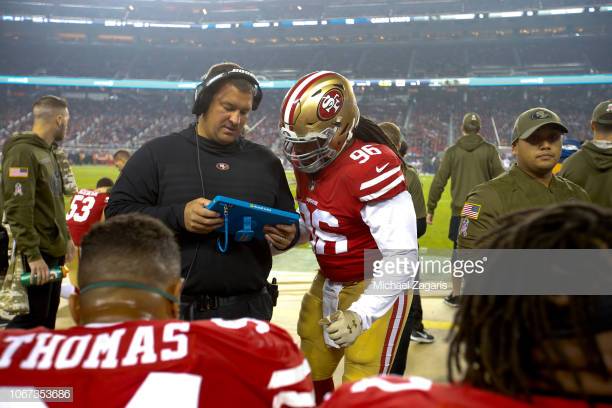 Joey Porter was the first piece of the Pittsburgh Steelers coaching staff to go, fired (or contract not renewed, if you want to be technical) by the team last Friday. Now, you have to think about his replacement. Let’s assume, though it’s no guarantee, Jerry Olsavsky stays, and the team is looking for just an outside linebackers coach. It’s all guess work, obviously, but here are candidates who make sense. These aren’t listed in any particular order.

Kevin Greene/New York Jets: Greene will wind up as the most popular name to take Porter’s job and I’ve seen the comments all over the place already. That largely stems from Greene’s interest in the job two years ago. Here’s what he tweeted to Steelers Depot at the time.

If My Steelers need me, I'm there. I hope they know that.

Yes, Greene is still under contract with the Jets – at least, I believe he is – but given the coaching change after firing Todd Bowles, the staff will undergo major changes like these situations always unfold. Often, the most popular candidate doesn’t end up actually signing, but Greene does make plenty of sense given his success as a player and coach, including a stint in Pittsburgh back in the 90s.

Chris Kiffin/San Francisco 49ers: Hired to be the 49ers pass rush specialist for 2018, he improved the team’s sack totals, rising from 30 to 37. Not a complete turnaround but noticeable improvement. He’s young, only 36, and can bring some energy to the locker room.

From a Steelers perspective, Kiffin has ties to the Steelers. He’s the son of Monte Kiffin, who coached alongside Mike Tomlin in Tampa Bay. Monte was a guest at several Steelers’ practices over the years, signaling a close relationship. Here’s what Tomlin said about Kiffin and Rod Marinelli back in 2013.

“These guys are football purists. I imagine they’re somewhere in the bowels of that facility right now, man, with trash cans talking about how to defend the A, B, C gap.”

If he wants, Tomlin can find out a pretty solid scouting report on Chris.

Chris Kiffin has spent large chunks of his coaching career with the defensive line, but it’s seemed to be in a pass rush role and in a way, the outside linebackers are just an extension of the defensive line. Kiffin also spent 2017 as the defensive coordinator at Florida Atlantic, a year where the defense finished 44th in points per game and 21st in sacks.

Being named outside linebackers coach would be an upgrade in title and probably pay while Kiffin would be working for someone he presumably already has a relationship with. Good reasons to make the move to Pittsburgh.

Billy Davis/Ohio State: You know how the Steelers love their Buckeyes. Davis is similar to Karl Dunbar. Both were with the Steelers decades ago. Davis served as a defensive assistant to Dick LeBeau from 92 to 94. So if the Steelers schematically stay the same, still rooted in those LeBeau concepts, Davis makes sense.

He has NFL and college experience, a nice blend of someone who knows what makes professionals tick but also how to connect with young players coming out.

We’ve talked plenty about how good Kevin Greene is. How about hiring the dude who coached him? That’s Davis, who was his linebackers coach in 1996 and 1998 when Greene finished with 14.5 and 15 sacks respectively. Davis helped install the 3-4 defense in Atlanta in the early 2000s and more recently, served as the Philadelphia Eagles defensive coordinator for three years before being replaced when Doug Pederson inserted his staff.

Davis got back into coaching in part to his close relationship with Urban Meyer, he was the best man at Meyer’s wedding, but with Meyer retired, Davis may look to go somewhere else to. Staying close to home, a Youngstown native, would be extra incentive in addition to climbing back into the NFL ranks.

Coaching since 1991, he would be the opposite of the Porter hire, a young face perhaps in over his head. Ohio State fans didn’t seem pleased with the job Davis did, it’s worth pointing that out, but it’s difficult to know how valid that criticism truly is.

Brad White/Kentucky: Again, looking at the college coaching ranks. White did spend four years in the NFL with the Colts, specifically as an OLB coach, before their coaching change sent him packing. He did a terrific job developing a player I’m sure the Steelers would love to draft. Edge rusher Josh Allen upped his sack total from seven in 2017 prior to White to 17 this year, vaulting him into first round consideration.

I know it doesn’t mean the world but I kinda like his resume having Air Force on it, spending two years there early this decade. This defense could use some discipline.

“When I talked to Brad, he impressed me with his expertise, his NFL experience and what a very, very good technician he is,” said Stoops, who did not know White prior to the hiring search. “Brad came highly recommended from people I know at Indianapolis. In addition to his knowledge of coaching linebackers, he has ‘big picture’ expertise.”

Bobby April III/Wisconsin: Yup, that’s the son of Bobby April, the Steelers special teams coach from the 90s. After taking a year off from coaching in 2017, he snagged the Badgers’ job this past year. April spent 2015 and 2016 with the Buffalo Bills, turning Lorenzo Alexander from special teamer to a 12.5 sack player. So you can see his impact in being able to develop someone, even late in their career (Alexander was 33).

April also spent two years with Rex Ryan in New York and has an understanding of how linebackers function in an aggressive, 3-4 scheme. Nice feather in his cap.