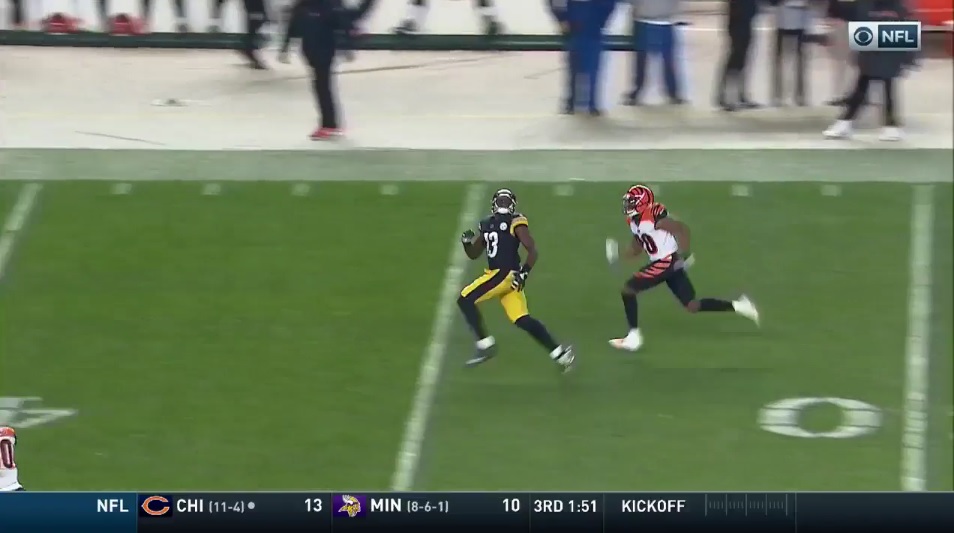 Let’s get back to football. You know the game. Weird looking ball, played on grass, 11 players on each side. We haven’t talked a whole lot about that little guy lately. But James Washington made a key play in Sunday’s win over Cincinnati. For the team, it set up the only touchdown of the day and essentially why the Pittsburgh Steelers won and even made the Cleveland/Baltimore game relevant. And for himself, a boost of confidence heading into his first offseason after a largely difficult rookie year.

As Ben Roethlisberger said post-game, the playcall was the exact same as Washington’s drop against the Denver Broncos. And like before, with that play and Jesse James’ long catch against the Baltimore Ravens, it only worked because the Steelers made an effort to fool the cornerback.

Washington’s 47 yard reception was a double move, getting the corner to bite on a speed out before converting it vertical and beating him downfield. To do that, they had to set it up. Make the corner assume the Steelers were throwing the out route. So before the catch, twice the Steelers asked Washington to run that speed out.

The first came in the 1st quarter. 1st and 10, first play of the drive, ball at the Steelers 18. 11 personnel with Washington motioning to a reduced/”wing” split. With the safety buzzing down and the corner off, it’s pitch and catch here for a seven yard gain on the speed out.

Similar look in the second quarter. 1st and 10 at the Steelers 41. 11 personnel, same motion from Washington. Not even sure if there’s a pass component here but again, Washington runs a speed out as James Conner takes this handoff for a gain of four. Now, the cornerback is thinking he’s getting a speed out everytime Washington lines up in that split on 1st and 10.

Now, the big unveiling. 1st and 10, first play of the drive, ball at the Steelers 26. And that’s the key. Defenders know tendencies. What teams do on a down, distance, line of scrimmage, and play of the series. So when the Steelers line up in 11 personnel and motions just like he did the above two plays, the corner is expecting Washington to run the speed out. And that’s how he plays it.

Except Washington converts the out to a vertical. And with the safety buzzing down and the FS shaded to the two receiver side, there’s no help over the top. Well thrown ball by Ben, and a much better tracking of the football by Washington this time. So it goes for 47, eventually setting up JuJu Smith-Schuster’s touchdown.

Credit to the execution, the throw and catch, because the players have missed on these chances too many times this season. But it starts with the offensive coordinator setting it up. Good playcallers not only use effective plays and good scheme but using one call to make another one work later on in the game.

If you just run the double-move without setting it up, it might not work. The corner won’t be as influenced because he isn’t expecting anything. But when you make him think one thing is happening and then take advantage of that fact, you create big plays. Should the Steelers trade Antonio Brown, they’ll need more concepts like these to free up receivers in 2019.