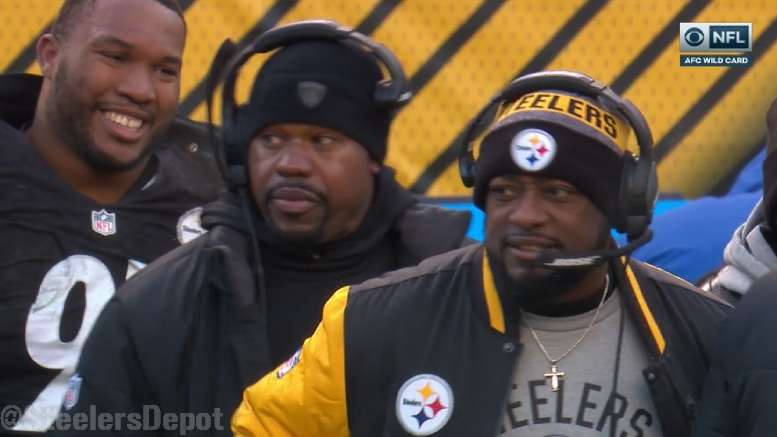 Pittsburgh Steelers Head Coach Mike Tomlin hinted at changes forthcoming this offseason during his end of season press conference on Wednesday. The first of those changes was announced yesterday when the team released a statement from the coach regarding the decision not to renew the contract of outside linebackers coach Joey Porter.

Porter, formerly an outside linebacker originally drafted by the Steelers in 1999 and released in 2007 in Tomlin’s first season as head coach, joined the coaching ranks as a defensive assistant with Colorado State in 2013. Tomlin brought him to Pittsburgh in the same capacity in 2014.

In spite of the emergence of T.J. Watt, the Steelers’ 2017 first-round draft pick, over the course of the past two seasons, Porter has not been given much credit for his ability to develop talent. Watt’s performance is treated as an outlier, a credit to his family history, against the backdrop of the failed progress of Jarvis Jones and Bud Dupree, two more former first-round outside linebackers with whom he has worked.

Still, given the climate in which the Steelers find themselves, I wouldn’t be surprised of Tomlin’s decision to move in a different direction has more to do with discipline rather than production. Porter was certainly something of a loose cannon on and off the field as a player—under Bill Cowher, mind you—and that didn’t really change after he retired and started coaching, either.

Porter ran into an incident most recently about two years ago at a South Side bar that led to his being arrested and hit with multiple charges, most of which were dropped. Many at the time believed he should have been let go then—myself included—especially given that another former Steelers outside linebacker, Kevin Greene, was seemingly willing to slide right into that job.

While I’m sure the decision was made taking many factors into consideration, I would be surprised if the aura of rambunctiousness in the Steelers’ locker room did not weigh pretty heavily in Tomlin’s decision regarding the future of the his outside linebackers coach. Mike Prisuta has the same sense:

Had a couple offensive players share complaints about Joey Porter late in the season, that he was trying to pit the defense against the offense in a divisive manner. The approach wasn’t understood or appreciated. This looks, smells like a move to address culture, chemistry.

Mind you, Tomlin and Porter are friends, and their children have gone to school together. He talked in his press release about the importance that he has played to the organization over the years and how that made it a difficult move to make.

Hopefully this is a sign of things to come. While I have stuck by Tomlin more than almost anybody else, it’s beyond time to be more forthright about taking control of the toxic elements in the locker room. This will be a defining offseason for the late stages of his coaching career, without a doubt.