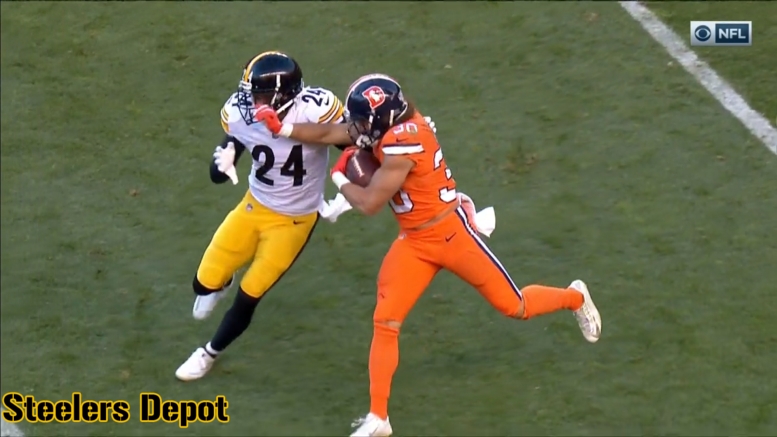 Like it or not, Coty Sensabaugh finished the 2018 season as a starting cornerback for the Pittsburgh Steelers. While that may not be the ideal scenario for the team in which to enter the 2019 season, I think it’s fair to say that the veteran made a reasonable case for himself that he deserves to be retained.

Sensabaugh signed a two-year contract in 2017 to play a role that was yet to be determined. Artie Burns and Ross Cockrell were coming in as the incumbent starters. Ironically, Sensabaugh would end up becoming something like Cockrell for the team this year.

“I think I proved myself this year, but I don’t know what that means going into next year”, the seven-year veteran told Joe Rutter this past week as he is scheduled to hit the open market again as an unrestricted free agent for the third time. He was also a street free agent once during the 2016 season when he was released mid-year.

“I have to prove myself all over again. That’s how this business works”, he insisted. “The guys that last in this league never get comfortable and are always cool with proving themselves year in and year out, no matter what you did the year before”.

He certainly had to prove himself this year. Last season, he was the next man up off the bench to start the year in the event of an injury. When Joe Haden suffered a leg fracture in the second half of the season, he had to start a handful of games, but he made several significant errors that hurt the team, even though they continued to win games.

That ultimately led to the team replacing him with then-rookie Cameron Sutton, who would be given the start against the New England Patriots before Haden returned a week later. He ended his first season in Pittsburgh as a healthy scratch.

And he would begin his second season as one as well, but Haden suffered an injury in the opener that caused him to miss Week Two. This time, Sutton started for Haden but struggled, which led to Sensabaugh rotating in.

Then Artie Burns was demoted and the two spent the next several games rotating before the team opted to ride with Sensabaugh after the bye week. They briefly flirted with reinserting Burns against the Patriots, but that dalliance lasted all of three plays.

He wasn’t flashy, he didn’t make a lot of plays, and he didn’t always manage to stop plays, bur Sensabaugh was pretty reliable this season when called upon to step up and play a big role. He didn’t get mashed with targets despite Haden being on the other side because he held his own.

“I feel like I became a better player here, a better man”, he said. “I hope it can continue. If it doesn’t, that’s how it goes sometimes”.