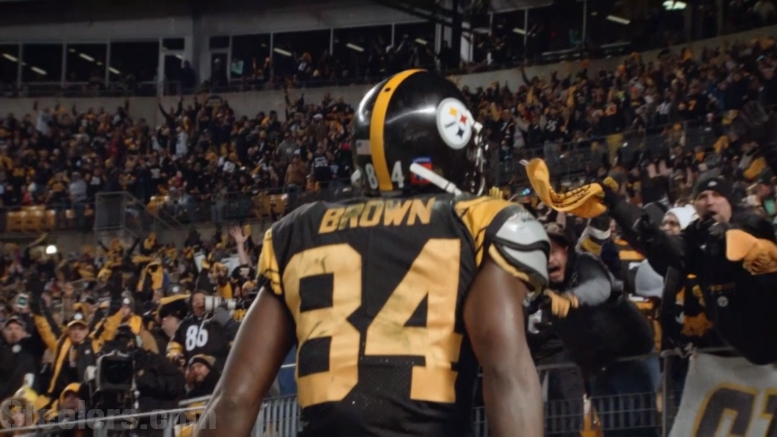 This isn’t about blame. Not about fault. There’s enough of that to go around. All that matters is how things get fixed. Unfortunately, it’s crystal clear Antonio Brown has no intention on making it work in Pittsburgh. That leaves the Steelers with one option. Trading him.

Let’s be a little fair to Brown. After all, there’s always two sides of a story, even if only one is being reported so far. Brown may have had legitimate gripes. I bet he does. Possibly, he felt slighted by teammates, underappreciated by his quarterback, frustrated for criticism that was unwarranted. Not running a flat enough route against Denver? Hey Ben Roethlisberger, how about blaming your center for a poor snap? Or yourself for a bad decision that led to the game-ending interception? Brown might feel like he doesn’t have enough of a voice in the locker room, one where he occupies as its best player. Maybe he’s right.

But none of that matters. What’s important is airing out problems, having an open, candid discussion, and seeing if this can be fixed. Perhaps it can. Perhaps it can’t. But that’s gotta be the first step. A step that hasn’t been taken, even more than two weeks after their season ended. Brown still hasn’t talked to the Steelers, as Art Rooney II again confirmed in his media pow wow Wednesday afternoon.

He took it a step further, admitting the chances of Brown staying in Pittsburgh dwindles the longer the two sides go without speaking. That’s always been obvious.

More Art Rooney:
— No trade discussions yet for Antonio Brown and while he's keeping doors open, as far as his returning to Steelers there's "not that many signs out there that that's going to happen"

Instead, Brown has aired his feelings with everyone else. He hung out with James Harrison during Mike Tomlin’s final press conference, openly trolling him along the way. He smoked cigars with Chad Johnson, teasing about a big “interview” that would give his side of the story. And yesterday, right after Rooney’s interview with the media – this isn’t a coincidence, as I’m sure you know – AB was back on Twitter.

Some highlights. He took shots at the organization and teammates.

Clearly they feel indifferent about me seeing all these reports the big interview coming! watching my teammates, fans and organization show me how they really feel! Stay Woke https://t.co/CSHNsVI74Q

He didn’t draft me he drafted @ESanders_10 same guy who missed rehab to go on networks to talk about me on situation he have zero clue! Arians now wears kangoo hats n glasses 😂 but ima diva! Done seen it all then they say we friends stop lien https://t.co/jALXyhQMAw

And went after Emmanuel Sanders, as you can see in the above tweet. Sanders quickly responded.

@AB84 😂😂😂😂 you know damn well I didn’t travel to LA to talk about you fam. You trippin yo. I went to be a analyst in which you acting foolish was the topic and I gave my analytical opinion. Get off the gas yo. You did it to yourself

He’s also flirted with the 49ers, tweeting at players, Facetiming with Jerry Rice, and getting a painting of the two made.

All the time for this trivial nonsense. No time for a phone call to the organization. Talking to Rooney, or Tomlin, or Kevin Colbert doesn’t have to be an apology tour. It’s not a time for AB to give in, say “yes sir” and toe the company line. Doing that would be counter productive, it fails to get to the heart of the issue, and will only lead to more issues down the line. Distractions this team surely doesn’t need. Call them. Be angry. Be honest. Let it all out. Now is the time. Now is the last time.

So far? Silence. And unless that changes, the Steelers’ hands are tied. This doesn’t get better without the two sides talking, hashing out their problems. That’s the only way he remains in Pittsburgh. But Brown seems indifferent. He seems ok with playing in Pittsburgh, I guess, but he’s not going to do anything to try and stay there.

Getting Brown to talk with the team is next to impossible this time of year. It’s the offseason. Brown is in another city, another part of the country. He’s under no obligation to be around the team until mandatory minicamp months from now. By then, the Steelers will have long decided if their future has #84 in it or not. It’s entirely up to him if he wants to answer the phone or dial the team himself.

His answer is clear. Not gonna happen.

Talking with the team doesn’t guarantee Brown will remain a Steeler. Not talking to the team guarantees he’s gone for good.