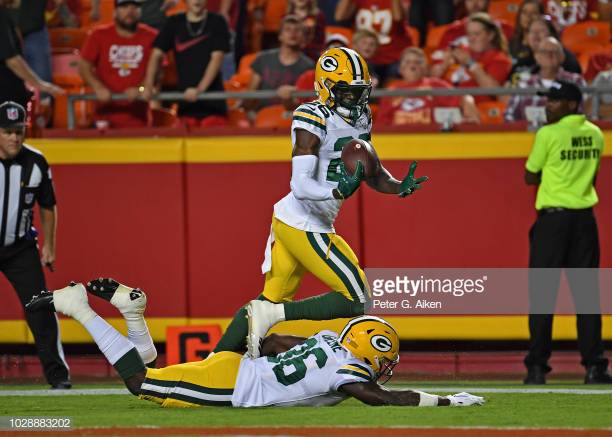 Remember C.J. Goodwin? Of course you do. He’s one of those names who never made an impact for the Steelers but gets mentioned every often enough to keep his name relevant on your local message board. In Pittsburgh, he was a height/weight/speed receiver. After his release, he got turned into a corner, and is still hanging around the league, currently with the Dallas Cowboys.

Waters is the reverse Goodwin. He came into the league as a receiver after a modest college career. But he was quickly turned into a corner and now, joins a Steelers’ secondary starved for someone who can make plays on the ball.

A three-star recruit from Florida, he stayed local, choosing The U over offers from Florida State, Ohio State, and West Virginia. But his career never really stuck the landing. He played immediately from his true freshman season but only once, his senior year, did he notch more than 40 receptions or 500 yards. But there were big plays and tough catches, like this touchdown grab in the rain on a 4th and 19 against Duke in 2014.

There were scary ones too, stretchered off later that same year, luckily diagnosed with “only” a sprained neck and wouldn’t miss much time.

Undrafted, the Green Bay Packers took a flier on him. He worked at corner throughout training camp and though he didn’t make the 53 man roster, was quickly signed back to the practice squad. Two weeks into the year, DBs coach Joe Whitt Jr. was tasked into making him a cornerback.

Whitt talked about why he thought Waters had a chance to make the switch.

“I don’t necessarily look at anything other than skill sets,” he told Packers News, “and he has the skill set that I like. He has long arms, he can bend, he has good balance, he has the height. And so now can we work those skill sets into playing defensive back. That’s my challenge and I’m excited to work with him.”

So that was his mission for the rest of the year. By 2017, the plan was to hit the ground running. But that hit a snag almost immediately. Waters suffered a shoulder injury – Goodwin did too, funny enough – in minicamp and then aggravating it during the first training camp practice. Green Bay waived/injured him in early August, where he spent the rest of the year.

Despite the derailment, Whitt said he was excited about Waters’ progress.

“Usually when you get those guys you can get them to play man because of their athletic ability. But his zone play has been really, really good, understanding how to pass routes, how to communicate with his teammates, where his help is, how to play to his help.”

In the 2018 preseason, he stayed healthy, recording a halftime interception in the finale against the Kansas City Chiefs and recording one tackle against the Steelers, wrapping up Damoun Patterson after a three yard gain late in the contest.

It wasn’t enough; the Packers released him outright at final cutdowns and didn’t sign him to the practice squad. He stayed on the street until early October, when the Steelers signed him to their taxi squad after Brian Allen’s promotion. He remained there the rest of the year before they inked him to a futures deal after the regular season.

It’s a path familiar to Goodwin’s but also a more successful Steelers’ story. Mike Hilton was a little-known in-season add, granted, signed even later in the year, before having an awesome camp the following year and earning the starting nickel spot. Waters profiles as an outside corner and given the need for more talent there, especially a former receiver who should be able to play the ball, there’s a little something to get excited about.