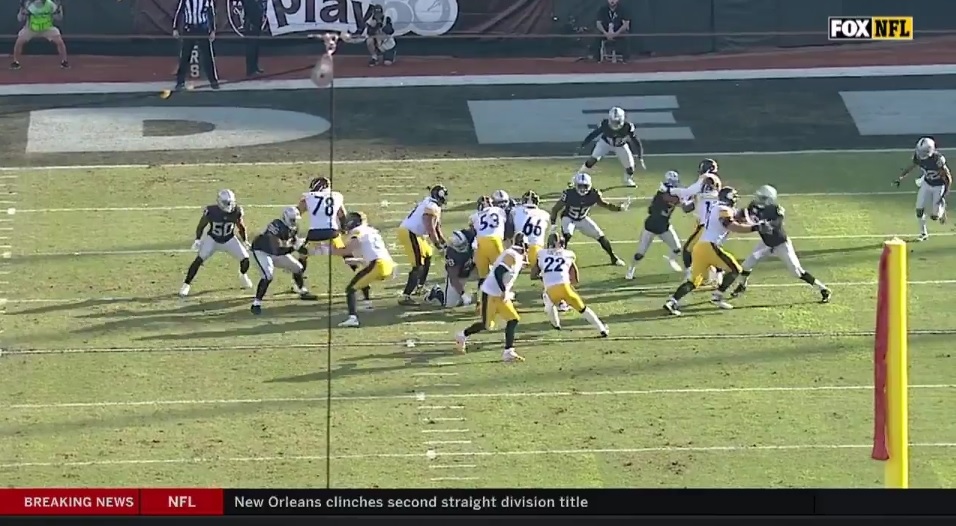 Former Pittsburgh Steelers PR man Ryan Scarpino had a great stat the other day, one worthy of the Stats of the Weird Hall of Fame. The Steelers have rushed for 75 or fewer yards in four straight games, making it the first time that’s happened since 1955, when the games were in black and white and your grandpa walked uphill both ways to attend.

Things hit a low point on Sunday, rushing for only 40 yards on 19 attempts against the Oakland Raiders awful rush defense. They were without James Conner, sure, but that doesn’t excuse the disappointing performance across the board. The line couldn’t work to linebackers, tight ends couldn’t hold their blocks, and the backs failed to create anything beyond what was barely blocked.

“I don’t know man,” he said. “Obviously, who we’re utilizing is an element of it. Game circumstance is obviously an element of it. We’re on a losing streak here and we haven’t been running the football effectively.”

Later, he got into more specifics to what went wrong Sunday.

“We didn’t do a good enough job of sustaining blocks. I thought our footing was an issue of that at times not only in terms of the line but the runners. Such is life. Footing is going to be an issue from time to time when you play on natural surfaces outside. Gotta be better.”

Tomlin also acknowledged there can be an initial disconnect whenever a new runner is inserted into the lineup, just as there was with Jaylen Samuels and Stevan Ridley replacing Conner for the first full game all year.

“I think there’s subtle nuances that are based on the ballcarrier. But that’s nothing new. I think that’s always ongoing whether your feature runner is available to you or not and you’re just giving him a break and someone else is coming in. I just think the plays that we call, we do it with the acknowledgement of who’s at running back. And sometimes, it’s schematic specific, it’s the plays themselves to highlight specific talents of the runner. And then there’s adjustments of the run styles.”

If there’s any silver lining, the New England Patriots have one of the league’s worst run defenses. They’re allowing 4.9 yards per carry this year, 28th in the NFL. In Sunday’s loss to Miami, the Dolphins ran for 189 yards and a pair of scores. At 35 years old, Frank Gore carried the ball for 12 times, gaining 92 yards.