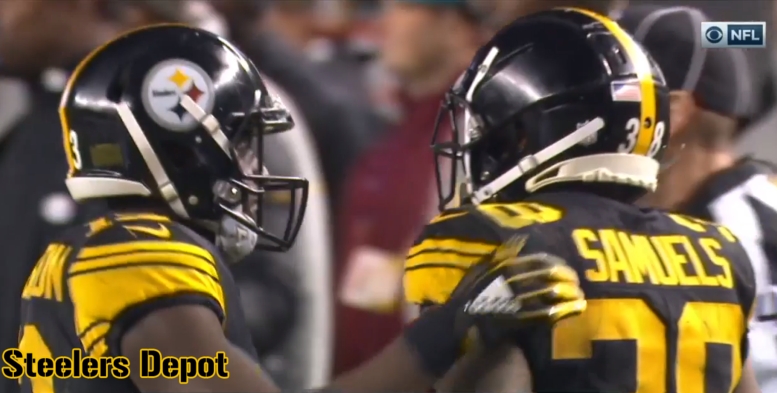 The Pittsburgh Steelers are blessed to have the best one-two combo at wide receiver in the NFL right now with Antonio Brown and JuJu Smith-Schuster, who by just about any reasonable measure should have been voted into the Pro Bowl outright, but was probably biased because Brown was also voted in.

Outside of that 1000-yard duo, however, the team has really lacked consistency from anybody else at the position, but perhaps based on signs from their last game, that could be changing with the development of rookie James Washington and the return of Eli Rogers.

Head Coach Mike Tomlin talked about the journey both of those players have taken this season, very different paths that led to them making their biggest mark of the season yet on Sunday against the New England Patriots.

Washington was installed as the team’s number three receiver by the second game of the season but was slow to produce and ultimately had been deactivated twice as a healthy scratch. The injury to Justin Hunter gave him his helmet back.

“James has had an opportunity to continue to ascend probably due to the unfortunate circumstances regarding Justin Hunter”, Tomlin pointed out. “And Eli’s been missing some because of football. He got hurt late last year and spent the entire offseason rehabilitating, and the vast majority of the early parts of this season working to get well”.

Rogers suffered a torn ACL in the playoffs last year and was only re-signed at the start of training camp. He was on the PUP List until Saturday and played the next day. On the fourth-year receiver, the head coach said, “he’s been working in recent weeks and Sunday was the first time for him to have an opportunity to contribute, and we appreciated his contributions and I know he’s excited about continuing to get back to work, continue to knock the rust off, and continue to find ways to be a positive contributor to our efforts”.

Rogers returned to the field for the first time and was active early, catching four passes for 20 yards, including a third-down conversion, and also drew a pass interference penalty. Washington had the best game of his career as well with a couple of explosive plays.

On the rookie, Tomlin said, “He’s getting an opportunity to make some plays and be a positive contributor to our efforts, and I’m sure that’s a good thing and one I’m sure that he’s concerned about continuing”.

The Steelers should be feeling as good about their wide receiver group coming into this next game as they have all season. And they may need that kind of firepower to keep up with the New Orleans Saints.