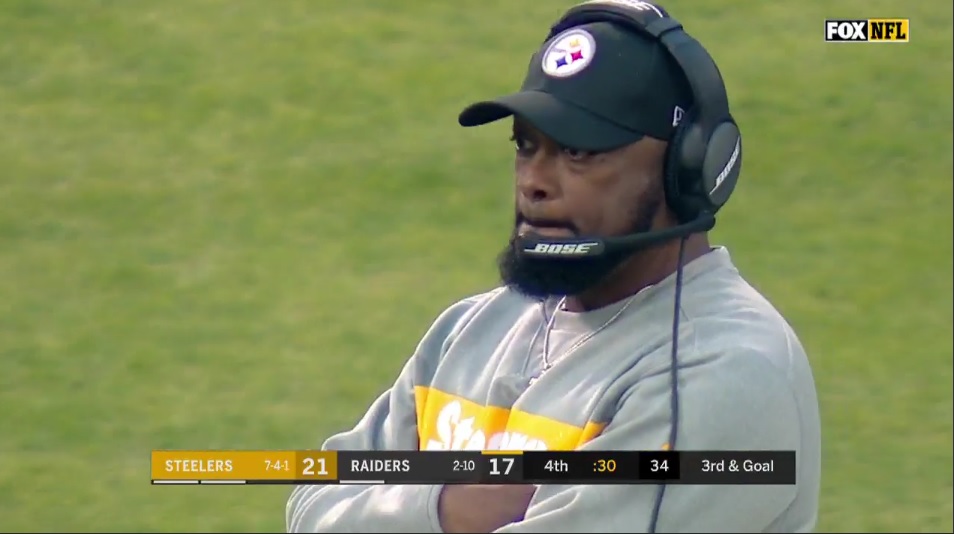 There’s no getting around it. Coaching stunk in the Pittsburgh Steelers 24-21 loss to the Oakland Raiders. It came from every area. But the biggest heat might be on Mike Tomlin, maybe more than ever before. It was a series of baffling decisions, beginning with Tomlin’s terrible explanation for why Ben Roethlisberger didn’t enter the game sooner than he did.

It wasn’t the only head scratcher at the end of the game. As the Raiders had the ball go-to-go with a minute left, Tomlin opted against using timeouts, letting the clock bleed down with his offense getting the ball back with just 15 seconds left.

In his post-game presser, he explained his reasoning.

“Yeah, I wanted to always keep a time out for our offense,” Tomlin said. “You guys know I kind of have that mentality about it and I did and I wasn’t sure JuJu was going to be able to get out of bounds on the subsequent possession. Just wanted to keep a timeout. Thought we had a chance to stop them. wanted to utilize the time out for the possession downs, third down, fourth down. We used one before the fourth down to no avail.”

The only timeout used came on an incompletion following 3rd and goal, burning it after getting a look at how the Raiders were aligned for 4th and goal. Despite that, Derek Carr found backup tight end Derrick Carrier open in the middle of the field for the game-winning score. It left Pittsburgh with no time and just one timeout.

Watch as the clock ticks off. Oakland made the right move, not worried about the clock. They were either going to score or run out of downs, not time.

From 1st to 2nd down, the Raiders took 38 seconds off the clock.

Pittsburgh ultimately never used a timeout. JuJu Smith-Schuster got out of bounds following the hook and ladder from James Washington, leading to the Chris Boswell slip as they attempted a game-tying field goal.

It’s not as if the Raiders were guaranteed, or even expected, to run the ball on that drive. Had Tomlin used a timeout there, then the Raiders threw back-to-back incompletions, as was the case, Pittsburgh could’ve gotten the ball back with about 50 seconds left.

Tomlin’s decision for this is slightly more understandable than keeping Roethlisberger glued to the bench but ultimately, it’ll be viewed as the wrong one. Too much time was sacrificed in the name of timeouts and the fruitless hope this defense was going to make a stop. Now the Steelers sit very much on the edge of falling out of the playoff race.