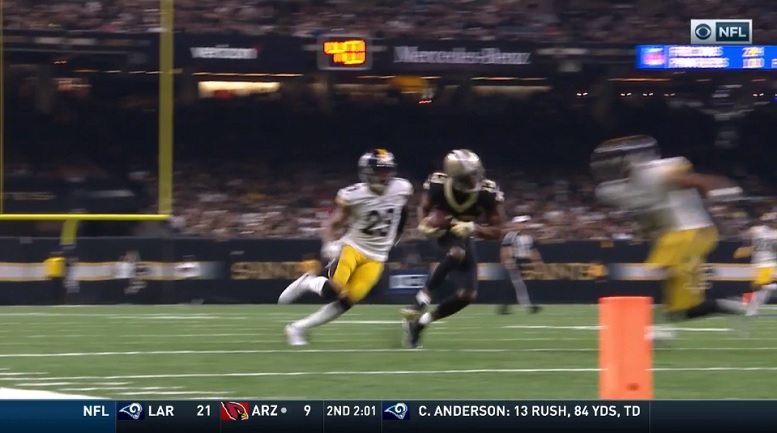 Pittsburgh Steelers safety Sean Davis had a big hit on New Orleans Saints wide receiver Michael Thomas during the team’s Sunday road loss that resulted in a pass failing to be caught and many feel that play should have been at least challenged by head coach Mike Tomlin in hopes that it would have been ruled a defensive fumble recovery. During his Tuesday press conference, Tomlin was asked specially about that Sunday pass breakup by Davis on Thomas and if he had the ability to challenge it being a catch and subsequent fumble.

“I don’t know whether legally they would have allowed me to challenge or not based on the initial reading on the field,” Tomlin said. “But my bird’s eye view, I thought it was banged out and it was an incomplete pass. They were definitive about it and we moved on.”

You can see a replay of that hit by Davis on Thomas and it sure looks like it comes milliseconds after the Saints wide receiver had tucked the football away while preparing to be hit by the Steelers defensive back. It was a bang-bang play for sure and it’s obvious the officiating crew looking directly at it didn’t feel that Thomas completed the catch process and thus failed to make a football move before having the football dislodged from him.

Another interesting aspect of that play, however, is that Steelers safety Morgan Burnett was seemingly allowed to return the recovered football some before the play was whistled dead. It should be noted, however, that the crowd noise made it hard to hear the official whistles on television.

Assuming he could challenge the play if he had wanted to, Tomlin had plenty of time to do so because it took a while and even a picked up erroneous flag for too many men on the field before the Saints offense next snapped the football.

That Saints drive, by the way, culminated in a touchdown just a handful of plays after the Davis hit on Thomas. You do have to wonder if Tomlin having lost his previous 10 challenges may have had something to do with him not challenging the incompleted pass to Thomas on Sunday.