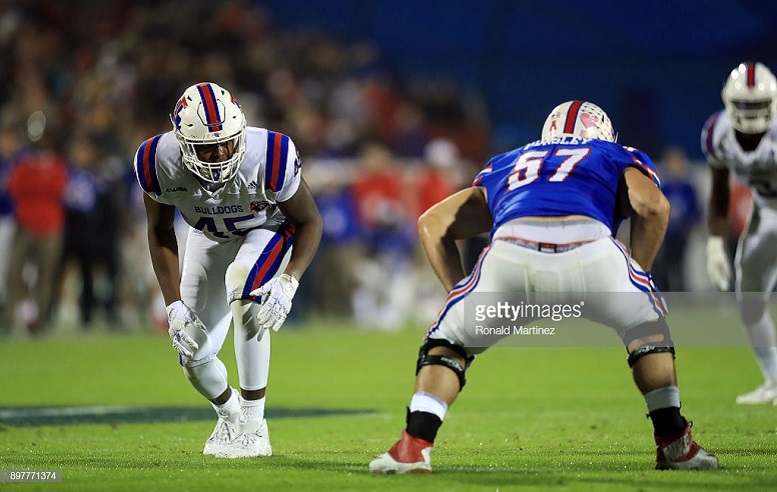 There are now three weeks left in the 2018 NFL regular season and if the Pittsburgh Steelers don’t win at least two of their final three games we might find ourselves fully emerged in draft talk several weeks earlier than normal. While it is way too early to start monitoring all the mock drafts that are starting to surface, I figured most of our readers would like to know who Todd McShay of ESPN.com has the Steelers taking in the first-round of his first mock for 2019.

McShay has the Steelers selecting Louisiana Tech defensive end Jaylon Ferguson with the 23rd overall selection of the 2019 NFL Draft and below is what he wrote about the choice:

Ferguson is rising on draft boards rapidly, and I expect him to shine at January’s Senior Bowl. He can really overwhelm blockers with his speed to power and would be another asset for one of the better pass-rushing teams in the NFL.

Ferguson, who according to ESPN currently measures in at 6-5, 259-pounds, really would only be considered as an outside linebacker by the Steelers as he’s nowhere close to being big enough to play defensive end or defensive tackle in their scheme. Honestly, he might be best-suited at the NFL level as a 4-3 defensive end as it doesn’t look like he played on his feet much at all in college.

In his 50 games at Louisiana Tech, Ferguson registered 182 total tackles with 64 of them resulting in lost yardage. He also had 42.5 sacks over a span of 4 seasons with 15 of those coming during his senior season.

With Ferguson coming out of a non-Power 5 Conference school, you can probably go ahead and rule him out as potentially being the Steelers first-round selection in 2019 just on that fact alone. Additionally, and while I have just barely started to scratch the surface on this year’s draft class, I think he might be more of a second or third-round prospect at first blush.

Regardless, we’re certainly going to have a draft profile on Ferguson at some point during the upcoming offseason and if he does show up at the Senior Bowl this year you can bet we’ll get a few nuggets on him while one of us from the site scouts him in Mobile, AL.

In case you forgot, last year at this same time McShay had the Steelers selecting South Dakota State tight end Dallas Goedert with the 31st overall pick of the 2018 NFL Draft. Goedert ended up being selected by the Philadelphia Eagles in the second-round with the 49th overall selection.