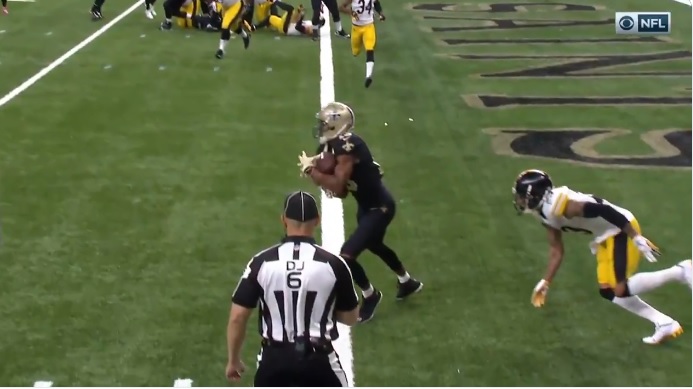 Your winners and losers from the Pittsburgh Steelers crushing loss to the New Orleans Saints.

Ben Roethlisberger: Roethlisberger played arguably his best game of the season. The offense relied on him, even more than usual, and he responded with great throw after great throw. One you won’t forget for a long time.

Antonio Brown: Despite being shut out in the first quarter, Brown couldn’t be stopped the rest of the way. Bumping him, bracketing, it didn’t matter. Brown had his way with an improving Saints’ secondary. An equally strong game as Ben had.

L.J. Fort: Fort had what was one of the biggest plays of the game, crashing through to block the Saints field goal in the fourth quarter.

T.J. Watt: Watt provided consistent pressure and like last week, turned it into one sack. He routinely moved Drew Brees off his spot and forced the ball out quicker than he wanted. He also barreled his way through the line to help free Fort up on his block.

Keith Butler: There were individual issues, and bad referring, but again, Butler didn’t seem to have guys in the best position to win. The idea to come out blitzing againstBrees, the QB who gets the ball out quicker than anyone else maybe in NFL history (perhaps second beyond Peyton Manning), was just dumb. He corrected it in the second half but the Saints did their damage. And the 3rd and 20 on the final Saints’ possession? I’m not sure what happened there. But it reflects poorly on the coach.

Stevan Ridley: For going full Fitz Toussaint. That fumble was a killer, taking away a field goal attempt and giving the Saints back the ball. The playcall was bad, yes, but Ridley’s gotta hold onto that one. No excuses.

Fake Punt Call: I know, I know. We can all be “results based” and talk about how much it would’ve been praised. But I’ll still make the case for it being a bad call. 4th and 5, just too far for the Steelers to try to fake out the Saints. Punt the ball, force Brees to go the length of the field, and maybe they make one mistake along the way. The defense made a big stand last week. I was ok with asking them to do it again, especially with the pressure they were starting to generate.

Refs: Because yes, they were horrible. At the end of the day, that can’t be an excuse.