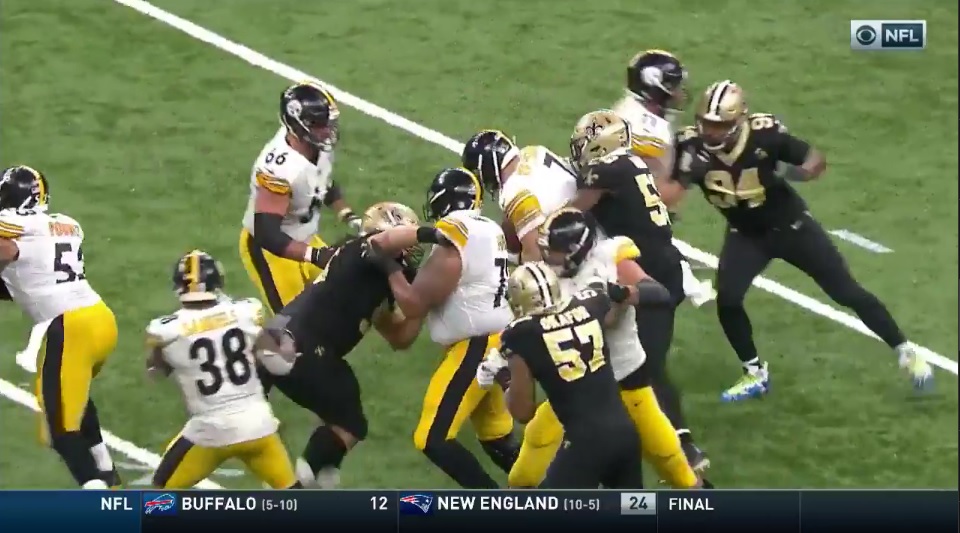 Checking out the three sacks allowed by the Pittsburgh Steelers in their loss to the New Orleans Saints. It’s the first time Ben Roethlisberger’s been sacked three times in a game since Week Three. Let’s break them down.

Pretty easy explanation here. Just great coverage by the Saints. They’re in Cover 1 Lurk, man coverage with a safety dropping down to rob any crossing routes. Steelers trying to run a switch concept to the bottom but there’s nothing available. 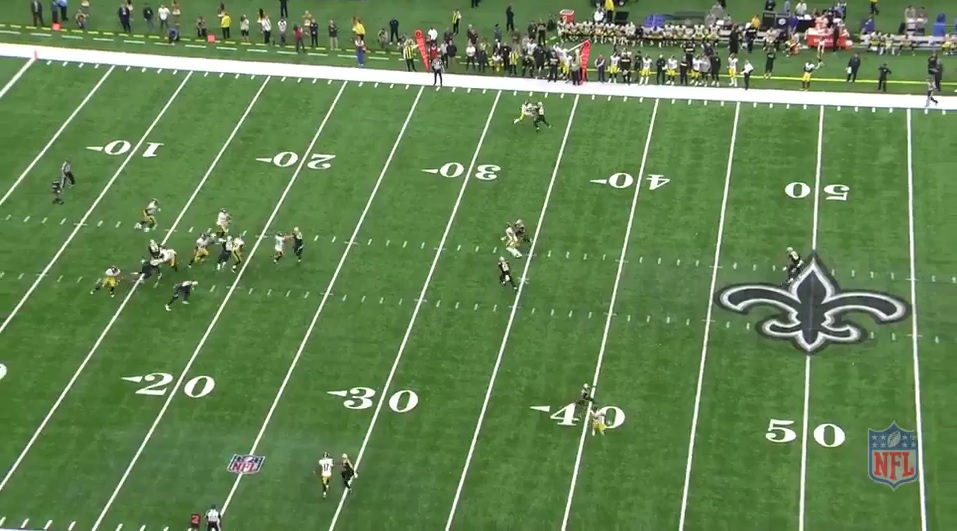 Line blocks it up really well. Ultimately, LB Alex Anzalone, not initially blitzing, wrestles Roethlisberger down as he looks to take off. I would like to see Jaylen Samuels make a decision here. Stays in to block, keying Anzalone (#47) but the linebacker isn’t rushing. Release out into the pattern, be a checkdown option for Roethlisberger, and force the linebacker to either leave the rush (giving Ben more time) or attack Roethlisberger (getting Samuels wide open vs man coverage).

I try not to do this often but this is a clear coverage sack. Credit to the Saints and at least the Steelers only lost a yard. They’d convert on 3rd and 11. 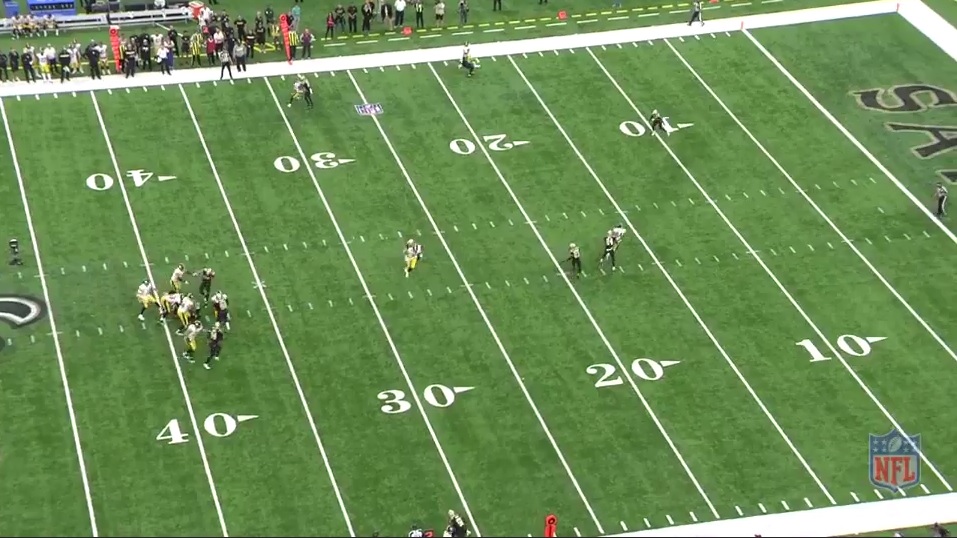 Another weird sack too. #95 Tyeler Davison, mostly a plugger with very few sacks in his career, gets wrestled to the ground by Maurkice Pouncey. But as he’s on the ground, he reaches out with his arm and grabs Roethlisberger’s leg. Looks like the monster in a horror movie. It’s enough to trip #7 up as he looks to bail out of the pocket. 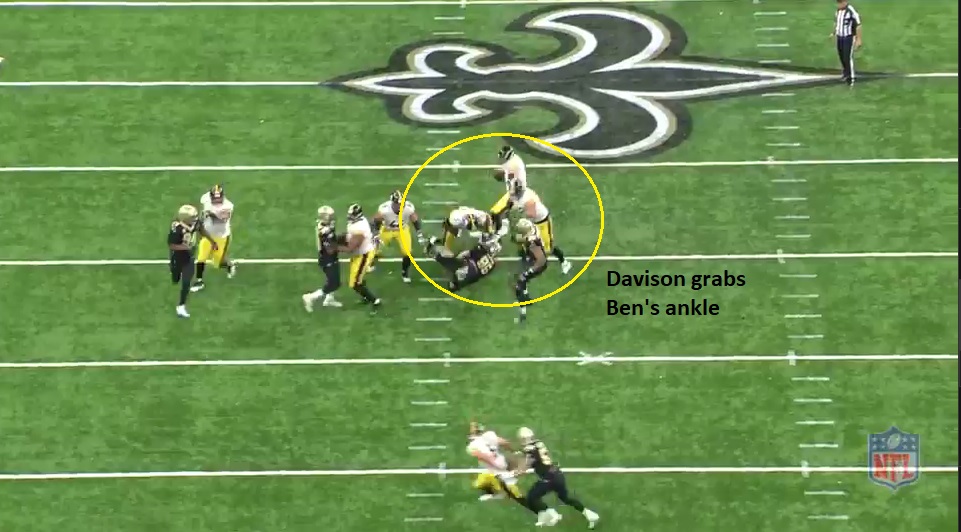 As unfair as it is, that was Pouncey’s guy. It did take a little more than three seconds from snap to Davison’s grab so I’ll put half on the coverage here, too. I’m in the Christmas spirit.

Blame: Half on coverage, half on Pouncey

This one we can put on a player much more concretely than the other two. BOB protection (Big on Big/Backs on Backer) with Samuels responsible for any LB who comes, in this case veteran Demario Davis. Samuels is a little late to see it but still in position to make the play, square to the block with Davis having just one gap to squeeze through. 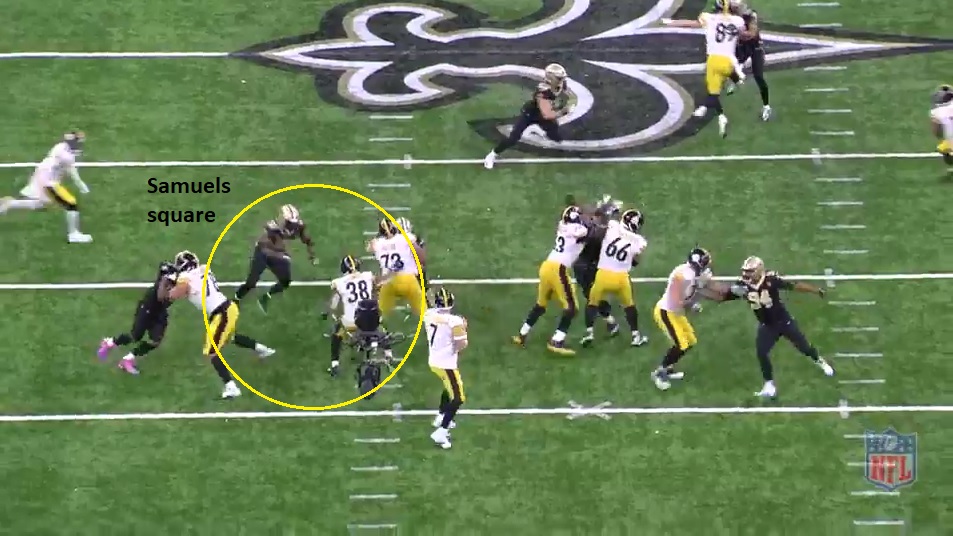 Samuels ducks his eyes and turns his shoulders, making it easy for Davis to blow by him. Poor technique from the rookie. Roethlisberger is a sitting duck and gets dropped at a crucial moment of the game. Don’t convert on 3rd and long, leading to the failed fake punt. 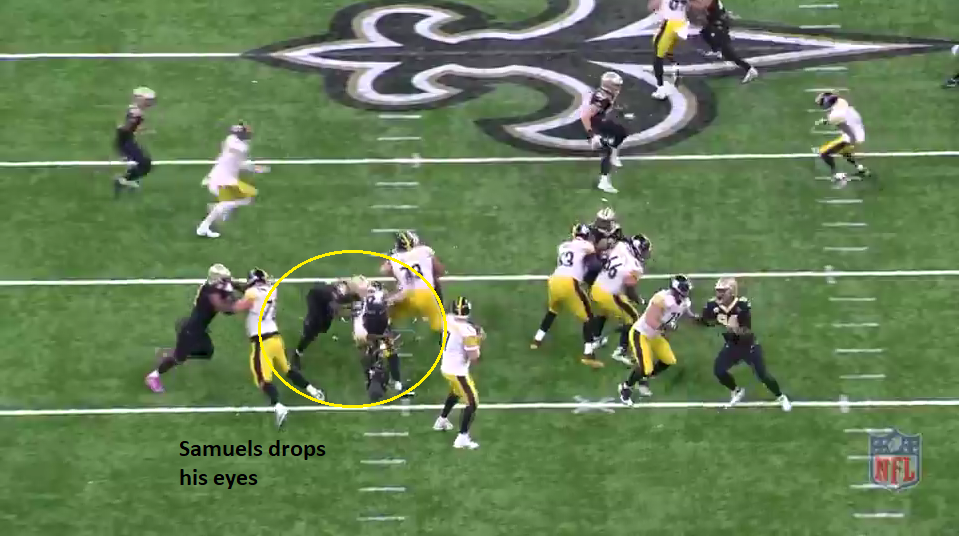