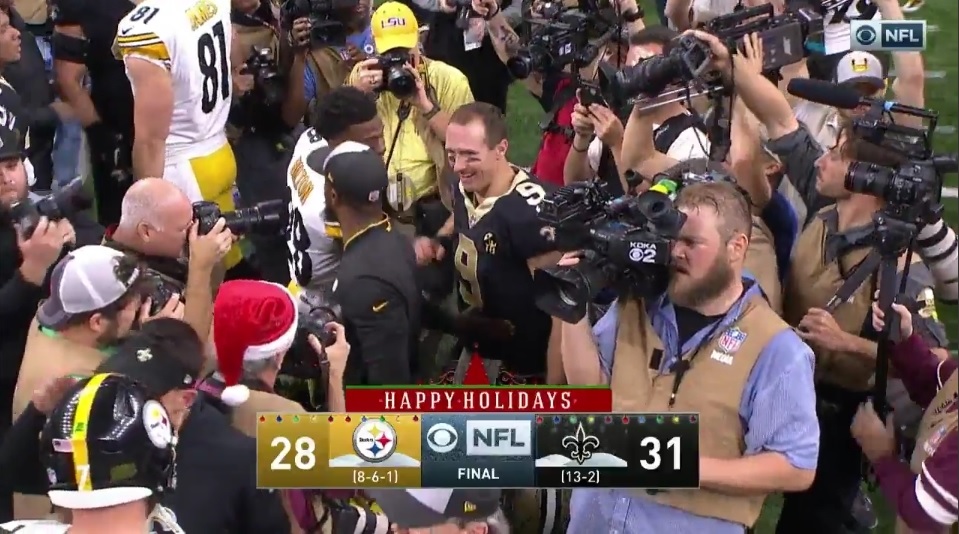 Hello darkness, my old friend. I’ve come to talk with you again…

Well, that went sideways fast as the Pittsburgh Steelers blew a late 28-24 lead, falling to the New Orleans Saints 31-28 in the Mercedes-Benz Superdome in the Big Easy.

Now, the Steelers count on the Cleveland Browns to beat the Baltimore Ravens in Week 17 for any shot at the playoffs, marking a massive downturn in a season that once looked so promising in early November.

Sunday’s game was as entertaining as we’ve seen this season, but in the end the Steelers came up short due to a couple of questionable calls, two massive fumbles, and a number of penalties called against them that had no business being called by Craig Wrolstad and his horrendous crew.

I know this one is going to be tough to swallow, but let’s try and get through this and enjoy the Christmas season as much as possible.

Just a few days after Cameron Jordan questioned Ben Roethlisberger and his Hall of Fame credentials, Roethlisberger went out on Sunday night and dropped 380 yards and 3 touchdowns on the Saints in the loss.

Roethlisberger struggled to get into rhythm early in the game, but from the middle of the second quarter on, Roethlisberger was his standard self, dropping dimes on the Saints, marching the Steelers up and down the field.

The veteran gunslinger was in sync with Antonio Brown throughout the game, hitting him to two massive touchdowns, often running things out of a 5-wide receiver set, spreading the Saints out and dissecting them.

My only real gripe with the veteran were some of his misses early in the game in the red zone, firing high for Vance McDonald and JuJu Smith-Schuster, failing to show some touch in that area of the field. If he hits one of those for a touchdown and not a field goal, we’re likely talking about a different outcome.

One week after putting on a dominant display at home against the Patriots, Jaylen Samuels had his workload reduced some against the Saints, yet still produced when called upon.

The rookie rushed for 53 yards on 12 carries, and added a huge touchdown catch in the game, but late in the game the rookie failed on a blitz pickup, resulting in a huge sack that helped determine the outcome.

Stevan Ridley might not be around much longer. For the second time this season the veteran running back fumbled in a pivotal spot in the game. Replay looked like his knee was down, but he has zero ball awareness and probably shouldn’t have been given the ball there.

Brown picked a great time to remind folks why he’s the best receiver in football. Against a strong Saints secondary, Brown went out and dropped a 14/185/2 line, most coming against standout second year corner Marshon Lattimore.

Brown didn’t create a ton of separation on the day, but he was flat-out ridiculous in tight space, walking the sideline for a couple of unreal catches, and just narrowly missed out on a jaw-dropping one-handed touchdown catch in the back-right corner of the end zone.

Along with Brown, Smith-Schuster had one heck of a game, feasting underneath on the Saints’ off coverage, finishing with 11 catches for 115 yards. The second-year receiver had a huge fumble that ultimately determined the outcome of the game though, bumping this grade down a bit. It was a pivotal outcome in the game, but it’s hard to overlook the production Smith-Schuster had on a day in which he was less than 100 percent with a groin injury.

Ryan Switzer and Eli Rogers were quiet, combining for 4 catches for 20 yards in the loss, but Rogers caught a 2-point conversion, and Switzer served as the jack-of-all-trades receiver, helping the Steelers create a bit of an extended rushing attack with the diminutive receiver.

James Washington fell back to earth a bit this week, getting held without a catch on 2 targets. He struggled to track the two deep balls late from Roethlisberger, but one was thrown well out of bounds.

Vance McDonald was rarely used on Sunday, but his one catch went for 49 yards after he bowled over Eli Apple off the line of scrimmage, leaving him wide open down the right sideline.

On the ground, McDonald and Jesse James helped Samuels rush for 4.4 yards per carry, but the Steelers never really established a consistent ground game on the afternoon.

I have to say, this group did quite well on 51 drop backs by the Steelers, allowing just three sacks and seven quarterback hits. One of those sacks was because of a failed blitz pickup by Samuels, so that’s not on the offensive line.

Alejandro Villanueva and Matt Fieler played well on the outside, slowing down Jordan and Alex Okafor, who combined for just 3 tackles and 1 quarterback hit.

Inside, Maurkice Pouncey allowed a sack by Tyeler Davidson, but was otherwise strong throughout the game. Ramon Foster and David DeCastro played well against Sheldon Rankins and David Onyemata, keeping the Saints mostly at bay.

It would have been nice to see the Steelers’ offensive line get going downhill against the Saints front seven in the ground game.

Holding the duo of Mark Ingram and Alvin Karama to just 3.0 yards per carry is pretty darn impressive if you ask me. Right away Cam Heyward, Stephon Tuitt, and Javon Hargrave controlled the line of scrimmage against a banged up New Orleans offensive line.

Tuitt and Heyward turned it on in the second half from a pass rush perspective, getting to Drew Brees for shot after shot, drawing penalties in the process. The defensive line was pretty solid on Sunday.

It would be nice to see them dominate as pass rushers right from the jump though, rather than turn it on completely part of the way through the game.

Much like the defensive line, the linebackers did a nice job playing the run, slowing down the Saints in that area of their attack, forcing them to be almost one-dimensional. Yes, the Saints rushed for 3 touchdowns, but one of them was definitely set up by a crappy call in the end zone.

Outside of run defense, the linebackers weren’t anywhere near good, and most of that is on coaching. Asking Vince Williams to cover Michael Thomas out of the slot is a disaster waiting to happen, much like asking Williams to try and shadow Karama out of the backfield is.

Putting LJ Fort in there didn’t do much either on defense. The Steelers simply don’t have the athleticism at inside linebacker right now to match the speed in the league. After seeing what made Williams so successful last week against the New England Patriots, the Steelers’ coaching staff – mainly Keith Butler – got away from it. That makes absolutely no sense.

At outside linebacker, the Steelers truly found a cornerstone starter in TJ Watt. He’s been lights out this season, and continued his strong stretch of play on Sunday, harassing the right side of the Saints line all night long, adding a forced incompletion on Ingram in the flat thanks to a huge hit.

I know that Michael Thomas feasted on the Steelers’ defensive backs on Sunday, and Ted Ginn Jr. found himself wide a$$ open on 3rd and 20 late in the game, but I thought the Steelers secondary was robbed time and time again on Sunday, Joe Haden especially.

Haden was obviously called for the phantom PI in the end zone on Kamara, leading to Ingram’s rushing touchdown, but Haden was later called for pass interference on Thomas on another 4th down that was a terrible call. That later led to Thomas’s touchdown catch after he pushed off Haden in the end zone near the front right pylon.

Sean Davis bailed out Coty Sensabaugh early in the game as Davis picked off Taysom Hill on a deep shot intended for Ginn Jr., who was well behind Sensabaugh. Mike Hilton played well in coverage once again, but the Steelers need to stop doing so many dang corner blitzes in obvious passing situations. Teams have caught on and are going right at the area Hilton – or Cam Sutton – vacates when they blitz. We saw that a ton on Sunday as Brees picked on Williams with Thomas on out routes.

Speaking of Davis, I know he had at least two missed tackles, which led to 10 points, but he had the big interception early in the game, and forced what should have been a fumble. The Steelers failed to challenge it.

Morgan Burnett had probably his best game in a Steelers uniform, breaking up a pass and recording a quarterback hit in the loss. He blitzed well when called upon and was very good in coverage, that bogus pass interference in the second quarter aside.

Chris Boswell stayed hot on Sunday, hitting both of his field goal attempts in the loss, including one from 49 yards that split the uprights once again.  He looks confident once again.

Punter Jordan Berry had a bad first punt, but bounced back with a 57-yarder, finishing with an average of 49 yards per punt.

The decision everyone will be talking about for the rest of the season will be the decision to run a fake punt with Roosevelt Nix on the Steelers’ side of the field midway through the fourth quarter, which ultimately failed and gave the Saints a short field.

At face value, I understand the decision. The Steelers haven’t faked a punt all season and felt they could catch the Saints off guard in that situation. I get wanting to not give the ball back to Brees and Co. there, and I get snapping it to Nix. It’s an outcome-based decision though and it failed. If it succeeds, people are calling Mike Tomlin and Danny Smith geniuses. Instead, they should be fired, per the fan base. I understand that sentiment too.

If they wanted to go for it though to keep possession and milk the clock, put it in Roethlisberger’s hands.

Fort came up with the big block on Will Lutz’s field goal attempt that seemed to push the game decidedly in Pittsburgh’s favor. But Ridley’s fumble made sure to render the blocked field goal a moot point.