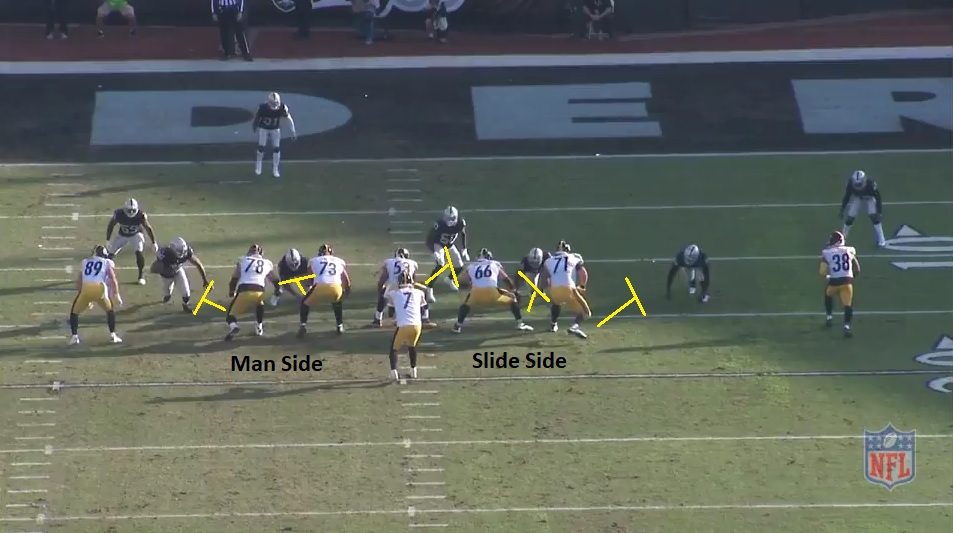 We’re back to breakdown the lone sack allowed by the Pittsburgh Steelers in Sunday’s loss to the Oakland Raiders. For this one though, there’s plenty to discuss.

Steelers working out of an empty set and Raiders’ DC Paul Guenther gives a very Cincinnati Bengals – his former team – look to try and stress the protection. Initially, he has both LBs mugging the A gap, giving the illusion he could send six rushers, one more than what the Steelers have to block. 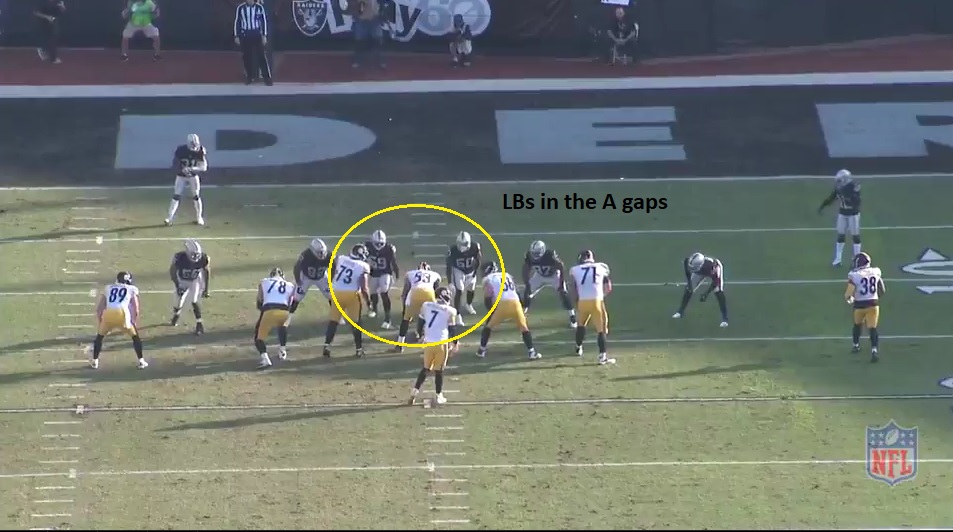 The LBs bail out before the snap and neither come so it turns into a four man rush. Steelers are in half-slide protection. Center Maurkice Pouncey, uncovered, begins the slide. He, David DeCastro, and Matt Feiler work to the slide side while Ramon Foster and Alejandro Villanueva are man-to-man on their assignments.

Oakland is running an “Otto” stunt with its two defensive tackles. The 3T to Foster’s side crashes into the A gap with the 3T to DeCastro’s side loops over the top. 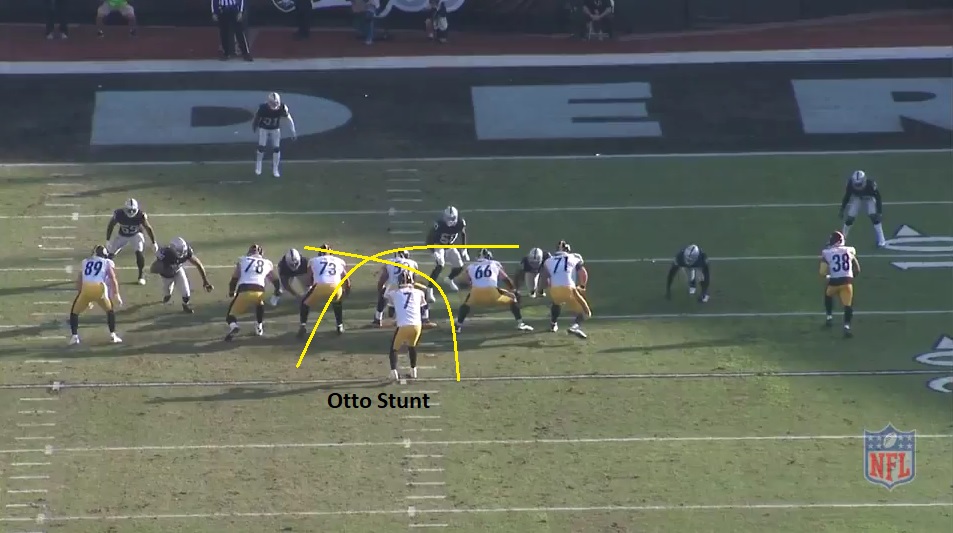 It doesn’t get passed off correctly and Clinton McDonald rushes in free, sacking – and injuring – Ben Roethilsberger. Allow one sack all game and it gets your QB hurt, totally changes the game.

It’s rare to see the Steelers struggle so much on a stunt pickup. Usually, they’re one of the best teams at stopping it, well-coached by Mike Munchak and Shaun Sarrett, who rep this stuff from the first day at camp onward. So what went wrong?

The issue is with the slide protection. Because it was a pair of two three techs stunting, Maurkice Pouncey was the man in the middle. It wasn’t like a “normal” stunt where the adjacent linemen are working together (like the left tackle and left guard, for example).

A stunt needs to be passed off between one linemen and another. The crasher gets passed to the next man and once that block is secured (a verbal call can indicate the stunt, then you “feel” it picked up by the linemen you’re passing it too), that initial linemen can come off the crasher and pick up the looper. But until then, you can’t come off the crasher because he’s getting interior pressure.

Here’s a great example of it because I know it’s a little hard to explain. Watch Matt Feiler and David DeCastro flawlessly pass this stunt off. As DeCastro takes the crasher, Feiler picks up the looper, and they shut things down.

That didn’t happen Sunday. Pouncey is sliding away and the 3T isn’t over him. So as Foster is carrying the crasher to Pouncey, Pouncey never receives it because he’s sliding the opposite direction. Foster isn’t able to work to the looper and McDonald comes in free. 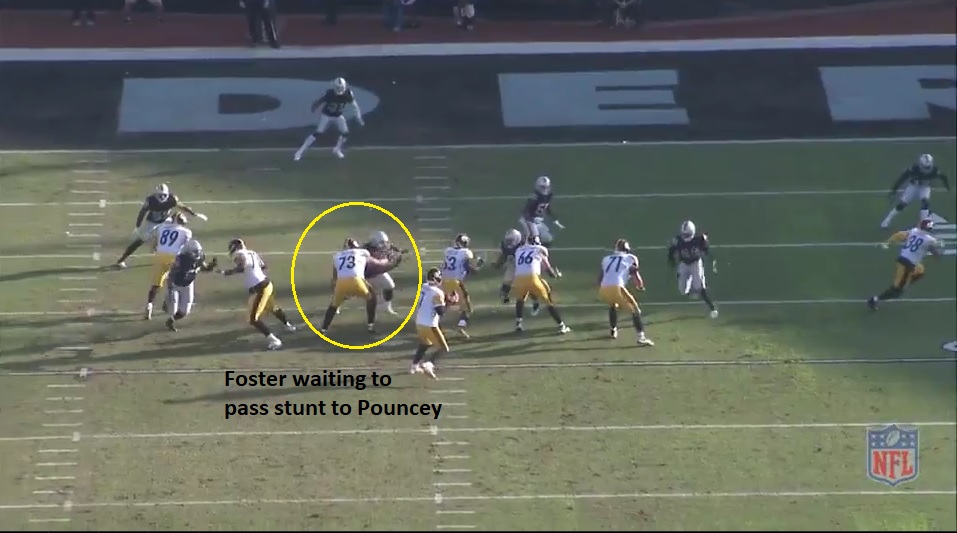 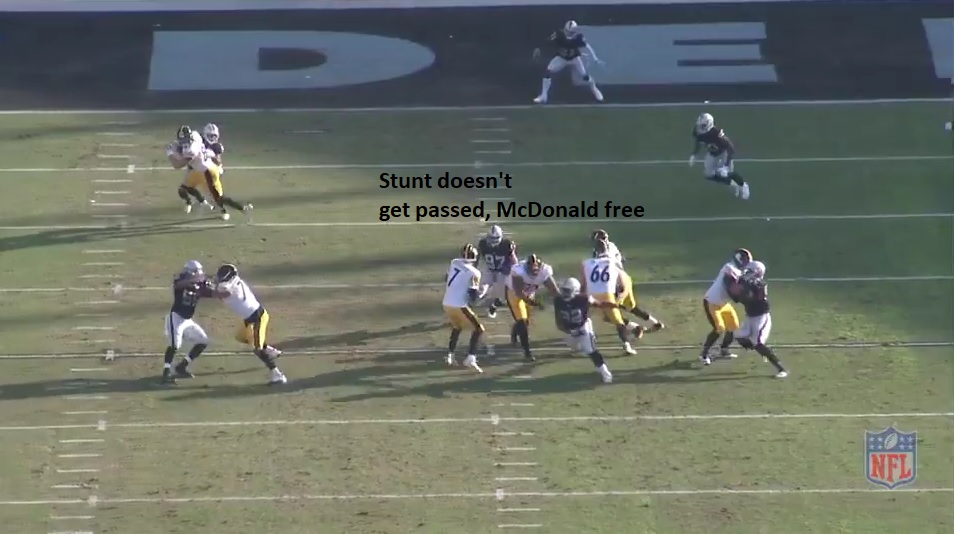 In the route, nothing was immediately available but Antonio Brown broke his route to the corner and would’ve had six if Roethlisberger had time and saw him. 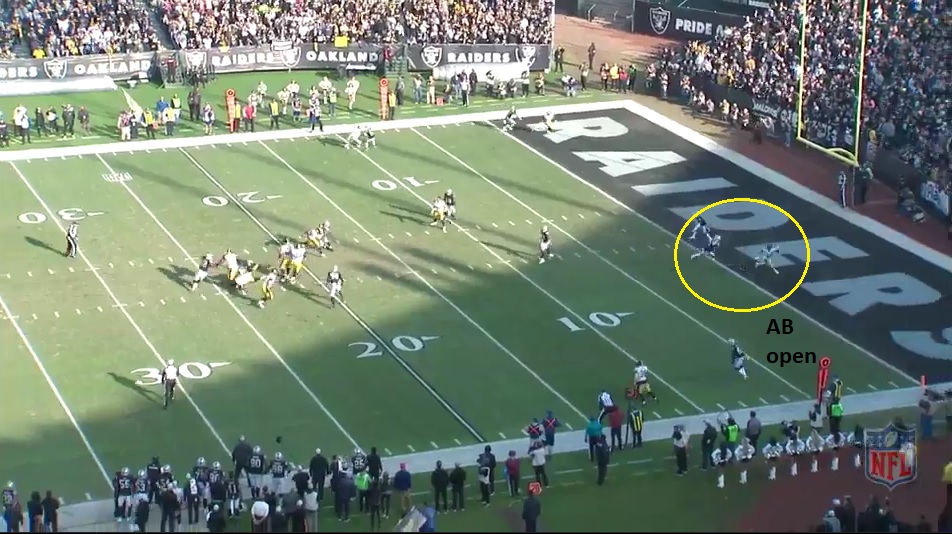 Solid execution by Oakland. This one is tough to assign blame because the Raiders made this one happen. Ultimately, I’m putting it on Pouncey because I think he overset a bit too much and ultimately, for this stunt to work, he’s gotta get his head around and slide with the three tech and ultimately take the crasher. This one isn’t on Ramon Foster, even if it feels that way watching it the first time. That’s what I initially thought before taking a closer look.