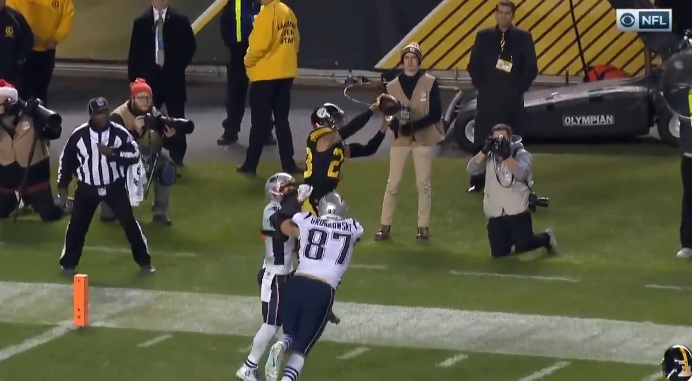 Jaylen Samuels: The Patriots came into this one with a weak run defense and the Steelers exploited it. Samuels showed burst to get to the perimeter and more decisiveness than last week, though he had a lot more running room, too. A good showing for him and helped the Steelers take some of the pressure off Ben Roethlisberger, even if #7 still threw it plenty.

He finished the day with 142 yards, a number I would’ve put any amount of money betting against prior to the game. What an outing for the rookie.

Joe Haden: Haden was called for pass interference on a play that would’ve gone incomplete but if you create a turnover, you better believe you’ll be on this list. He is the first Steelers DB, since he himself did it, to pick off a pass since Week 8. It came at the game’s most critical point, the Patriots in the red zone down by just four. A great leaping grab between two receivers to come down with the ball and finish the play.

T.J. Watt: Watt made quick work of Marcus Cannon. Got pressure all game long before finally finishing with his first sack in the third quarter. Made it possible for the Steelers to rush just four and still get to Brady, moving him off his landmark and forcing short, sometimes inaccurate, throws.

James Washington: Washington made big plays since his first career reception, a TD against Kansas City in Week Two. His deep ball catch down the right sideline in the third quarter were the type of plays he made look easy in training camp and the preseason. Later on the drive, he picked up serious YAC, breaking away from the corner for another big gain. Good bounce back from him.

Offensive Line: Gotta show some love to the big boys up front. They gave Ben Roethlisberger all day from the pocket and opened up lane after lane in the run game. David DeCastro continued to abuse DBs on the perimeter. But from left to right tackle, a great showing by the entire unit. Ramon Foster also stuck out to me.

Gameplan On Gronk: Hats off to coaching, scheme, and players. Rob Gronkowski has been the Steelers killer. Not today. Two catches. 21 yards. A great showing for those involved.

Artie Burns: Burns was given a chance to bounce back, seeing first team reps all week. His “start” lasted one drive, apparently in the wrong for Chris Hogan’s 63 yard walk-in touchdown to tie the game. He didn’t play another defensive snap the rest of the game. His time in Pittsburgh should also be done, though that won’t happen until the offseason.

Mike Tomlin: One, for the bad challenge, one he wasn’t going to win and cost the Steelers a first half timeout. He’s now lost ten straight challenges.

Two three, for allowing the depth chart changes at corner, where by the second quarter, Mike Hilton and Coty Sensabaugh were back in the lineup. So all you did was severely limit their snap count for the biggest game of the year. Not great!