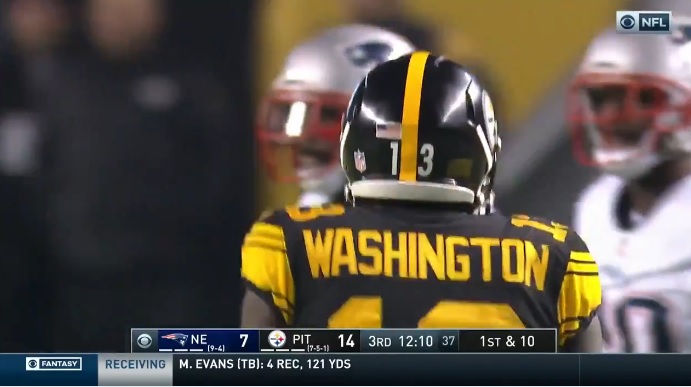 Even in a low-scoring game, plenty of weird to go around. Your Pittsburgh Steelers stats of the weird.

– Usually, New England and Pittsburgh means offensive fireworks, with two top ten offenses and defenses who have been struggling. The 27 combined points is the lowest combine score between these two teams since a 20-6 Steelers victory back in 1991. Since the merger, it’s the third lowest scoring game between these two clubs.

– Joe Haden is the first Steelers DB to intercept Tom Brady since Chris Hope in 2005. He is responsible for the last two interceptions in this secondary. Week Eight and today.

Haden is also the first Steelers CB to pick Brady since Ike Taylor and Deshea Townsend did in the same game in 2004, Ben Roethlisberger’s rookie season.

– Red zone offense today for each side.

– Steelers have only been penalized six times in the last two weeks.

– James Washington led the Steelers with 65 yards receiving today. He’s the first Steelers wide receiver not named AB or JuJu to lead the team in receiving yards since Week 17 of the 2016 season, when Eli Rogers paced the group with 61 yards. A game where the starters rested.

– T.J. Watt is the first Steelers OLB to record 11 sacks in a season since LaMarr Woodley in 2009.

– Rob Gronkowski’s career vs the Steelers: