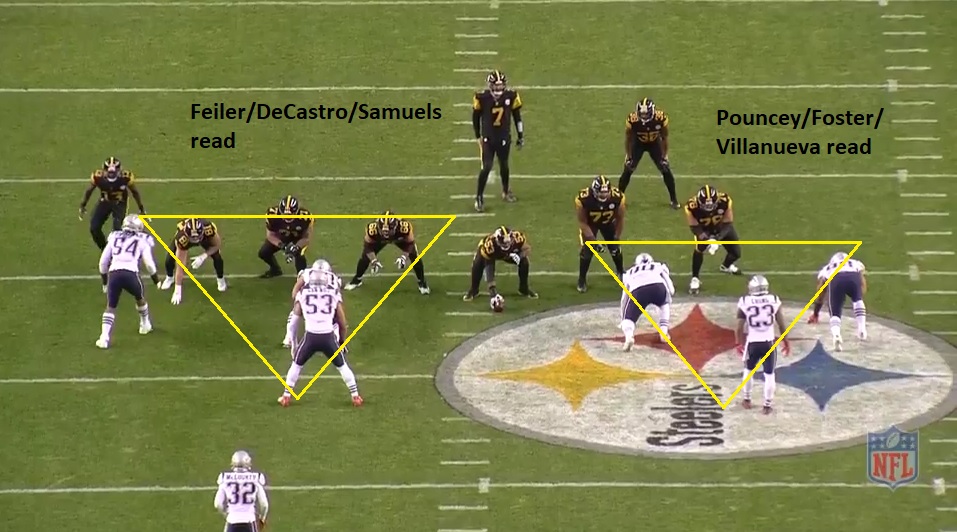 We’re back to breakdown the lone sack allowed by the Pittsburgh Steelers in Sunday’s win against the New England Patriots. Two given up, both occurring on the same drive.

Pretty easy to break this one down. It should’ve been six in to block, not five, and that’s the crux of the issue here. Here’s how things look pre-snap. Half slide protection, starting with center Maurkice Pouncey (first man uncovered begins the slide) with David DeCastro and Matt Feiler man-to-man away from the slide. 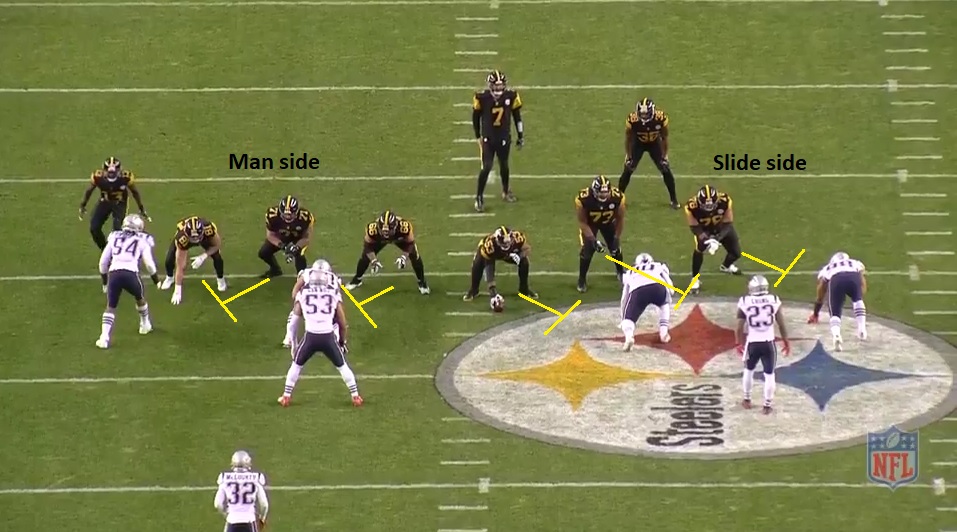 That means Jaylen Samuels is responsible for the linebacker or anyone else who comes away from the slide side. An offensive line usually has “triangle reads,” you can see a video on it here, to make the protection easier. So here’s how things look with the back included.

And this is where having a rookie back can be dicey. Because Kyle Van Noy times his blitz well, rushing in at the last second, Samuels isn’t looking for it and doesn’t pick it up. He releases out into his route, thinking he’s ok to do so, as Van Noy blows past. 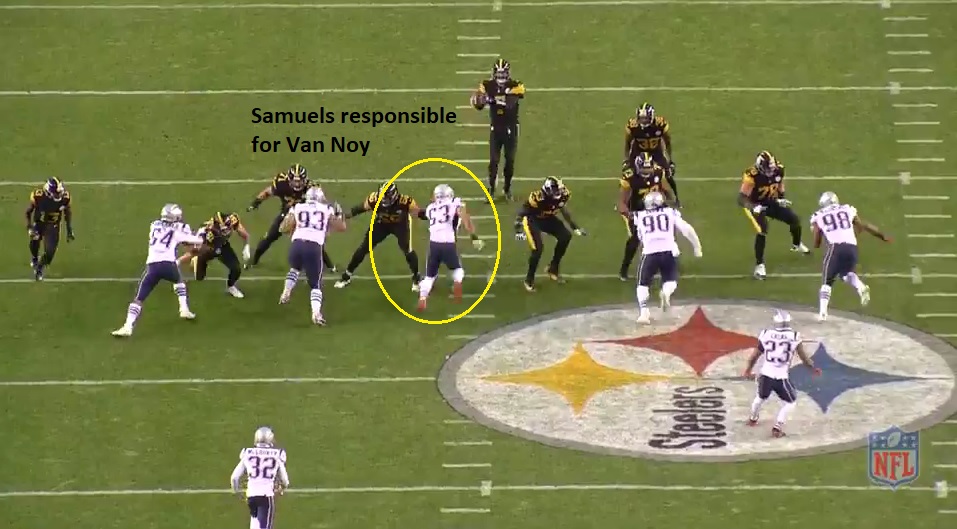 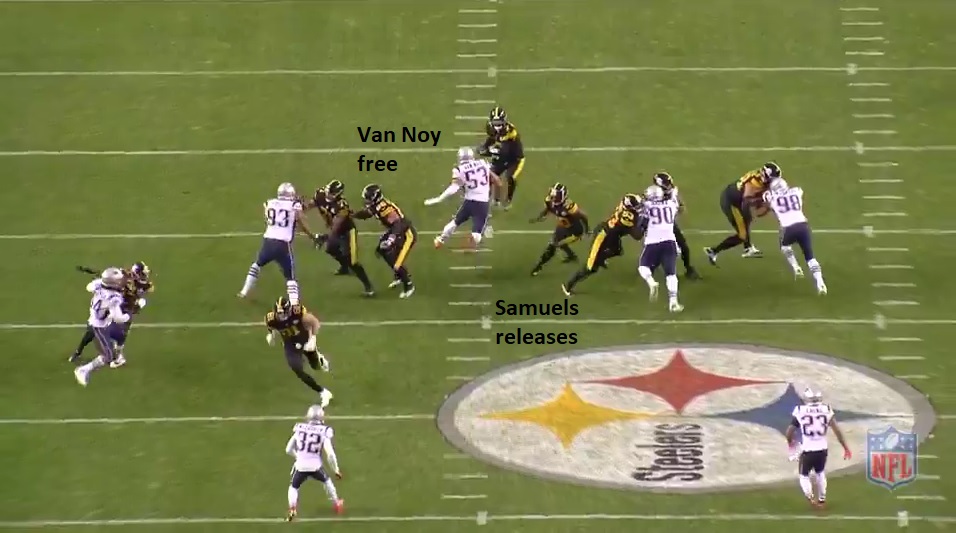 This isn’t a “hot” because the back is supposed to take care of him. And he isn’t David DeCastro’s guy, responsible for the three tech, #93, because you don’t know the LOLB is going to drop into coverage like he did. This sack is on Samuels, for releasing out and not picking up the linebacker. A rookie mistake.

This one is a little harder to figure out. Patriots are bringing a corner blitz with Jonathan Jones coming off the edge. Again, it’s Van Noy looping around. But the Steelers have the numbers to pick it up. Matt Feiler on Van Noy, Samuels on the corner. 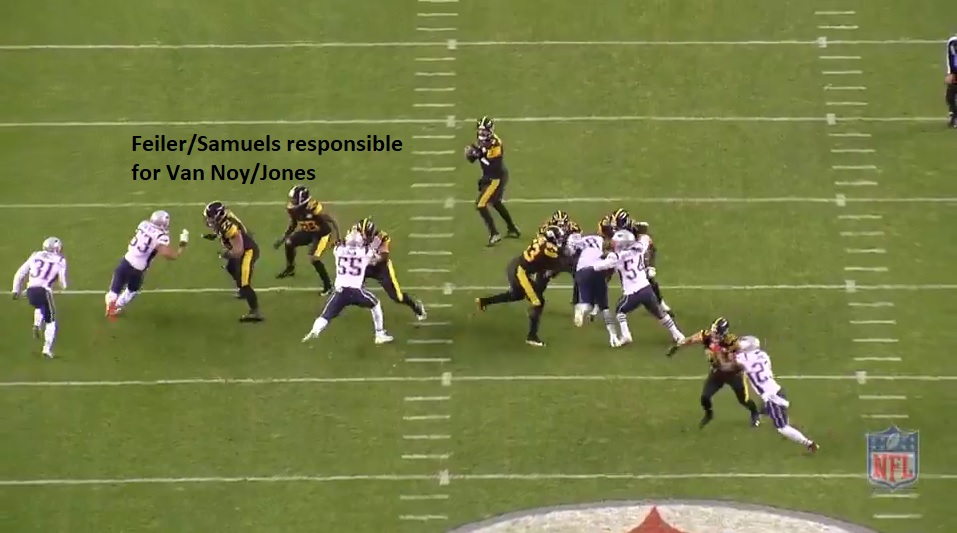 But there’s some confusion between Feiler and Samuels on who is sticking with who. Samuels jumps outside, which gets in the way of Feiler trying to seal Van Noy, and Feiler thinks he’s going to pass it off to the back. Ultimately, both guys wind up on Van Noy, leaving Jones free on his corner blitz. 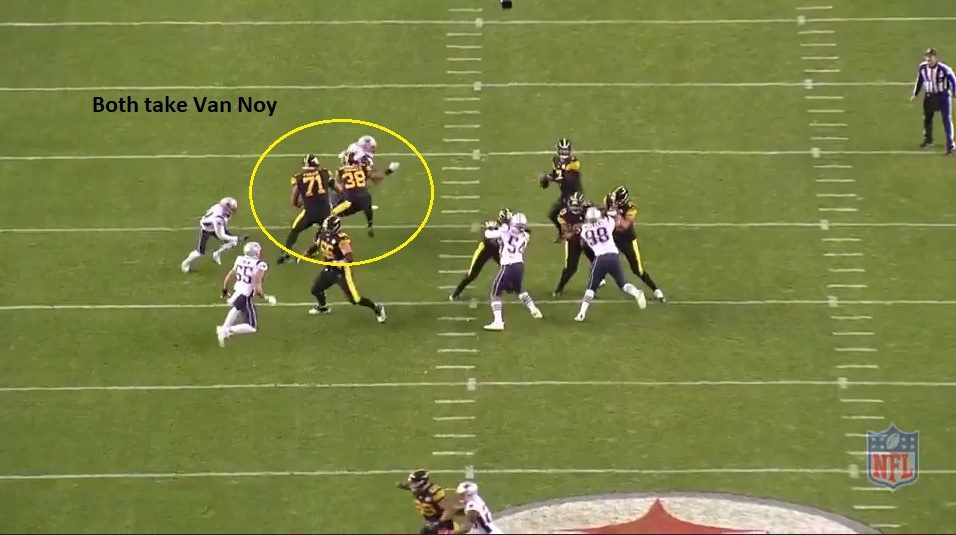 Roethlisberger bumps into Feiler, gets grabbed by Jones, and then pulls back throwing the ball to David DeCastro. Second sack in three snaps.

Here, I think Samuels has to take the corner. That’s the matchup you want, rather than Feiler on the corner and Samuels on the linebacker. Samuels seemed to jump outside a little too early. I know that was the direction Jones was going but let him keep it wide. It’ll be easy to seal him at the top and normally on that blitz, if the backer is wide, the corner is cutting underneath.

So again, the blame goes to the rookie, though I think there’s more debate here than the first one.