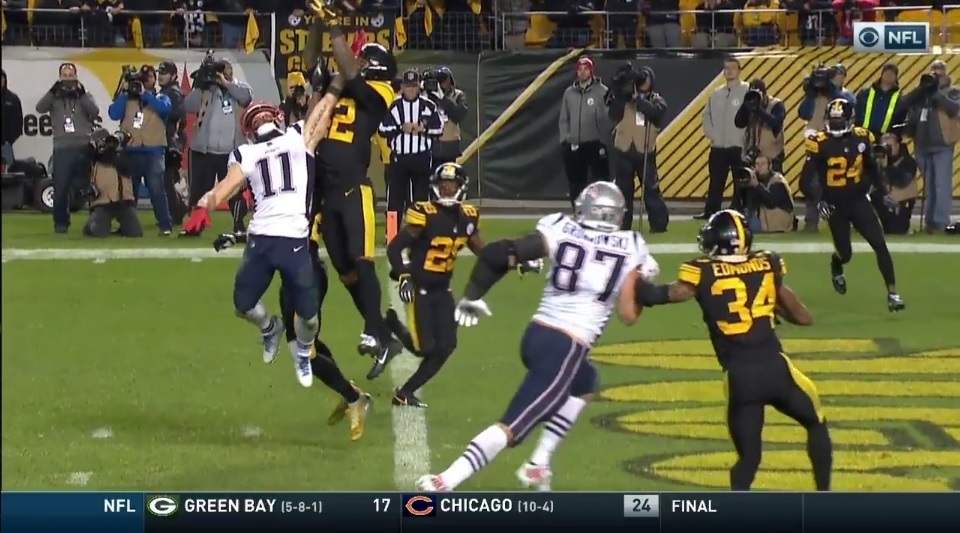 For the first time since 2011, the Pittsburgh Steelers emerged victorious over the New England Patriots, coming out on top 17-10 on a last-minute defensive stand at Heinz Field, keeping the AFC North division title and playoff hopes alive.

The defense played a whale of a game holding Tom Brady and the Patriots’ offense to just 10 points in the win. Once again, the offense left some points on the field, making for a heart stopping final drive by New England, but the football gods were smiling down on the Steelers on Sunday as Pittsburgh finally exorcised the Demon that was New England.

While we’re riding this high after the win, let’s take a look at positional grades for the Steelers.

One week after having one of his best performances of the season in a loss to Oakland, Ben Roethlisberger turned right around at home and struggled a bit in the passing game, finishing 22-for-34 for 235 yards, 2 touchdowns and 2 interceptions.

Again, he missed some deep ball throws and seemed to force the ball at times, resulting in the two interceptions, but he connected with guys when it mattered most, none bigger than the third-down strikes to Jaylen Samuels and Vance McDonald on the final offensive series of the game for Pittsburgh, moving the chains and eating up clock.

Roethlisberger’s touchdown pass to Antonio Brown was a bullet between two defenders, showing off his arm, while his completion to Samuels late in the game was vintage Ben, buying time outside of the pocket to let a receiver get open.

It wasn’t 7’s best game, but he came up big when it counted.

Have yourself a day, JaySam!

Making his second career NFL start, Samuels punched the Patriots in the mouth over and over again on the ground, rushing for a career-high 142 yards on 19 carries, adding 2 catches for 30 yards through the air, with none bigger than his 20-yard catch from Roethlisberger late in the fourth quarter.

Samuels had a ton of success on power and the toss counter throughout Sunday’s affair, gashing the Patriots left and right. He ran hard, was decisive, and got his pads square to the line of scrimmage quickly, allowing him to get North and South with speed.

Stevan Ridley also had a strong day against his former team, rushing for 16 yards on 3 carries, giving Samuels a bit of a blow throughout the game. Ridley had something to prove against the Patriots, and he ran with force downhill, helping the Steelers set the tone early against New England on the ground.

New England is none for taking away an opposing team’s best weapon or two, and the Patriots did a decent job of that on Sunday, holding JuJu Smith-Schuster to 4 catches for 40 yards, and Brown to 4 catches for 49 yards, but Brown was able to find the end zone in the win.

That being said, the Patriots didn’t have much of an answer for James Washington and Eli Rogers, who made his 2018 debut.

Washington finally dialed in with Roethlisberger on a deep ball, a 32-yard completion down the right sideline, while Rogers converted a couple of first downs out of the slot early.

Washington had his best game to date, adding a 24-yard catch and run after the 32-yard bomb in which he ran through a would-be tackle to pick up the first down. He looked very confident out there.

Steelers tight ends combined for just 3 catches, 22 yards and a touchdown, but they made their presence felt on Sunday in the run game, serving as extra blockers for Samuels’ big day.

The Steelers brought McDonald back across the formation for kick-out blocks on some of those toss counters, helping the Steelers blow open some big lanes. Jesse James more than held his own too when called upon.

If your tight end isn’t going to be a factor in the passing game, they need to come up big as blockers. Pittsburgh’s tight ends did that on Sunday.

That was an elite performance from an elite unit. That’s pretty much all that needs to be said.

But honestly, one week after really struggling on the road at Oakland in both the run and pass game, the Steelers’ offensive line flat-out dominated the Patriots’ front 7 on Sunday, helping Pittsburgh rush for 158 yards on 25 carries (6.3 yards per carry), and giving up just 2 sacks and 7 quarterback hits, allowing Roethlisberger a ton of time to throw on Sunday.

When the Steelers needed to run the ball on Sunday, the offensive line came through in a big way. They established the run game early and really seemed to wear New England down late.

Yes, New England rushed for 5.1 yards per carry on Sunday, but a lot of that came on none drive in which the Patriots had to settle for a field goal. I’ll take that any day of the week.

Up front, Cam Heyward, Stephon Tuitt, and Javon Hargrave were tough to block throughout the day, as the trio combined for 10 tackles in the win, led by Heyward’s 4.

Heyward and Tuitt got to Brady quite a bit on Sunday too, recording 5 quarterback hits of the Patriots’ quarterback. Tuitt drew a holding call on New England’s final drive that really seemed to throw New England out of rhythm, which ended up being a monster call in the game.

The second-year outside linebacker kicked the crap out of right tackle Marcus Cannon all game long. So badly, in fact, that Cannon will likely have nightmares of Watt for the next week or so.

Watt used his speed and power very well off the edge, often ducking under Cannon’s blocks, drawing one holding call on the day. Watt recorded 3 quarterback hits in the win, and a couple of his pressures resulted in Brady getting rid of the ball faster than he wanted to. That’s how you beat Brady and Co.

On the other side, Bud Dupree was very quiet going against Trent Brown. He did leave the game briefly due to injury and didn’t seem to look as explosive as he has in the last few weeks.

Inside, Vince Williams had a heck of a day overall. The veteran linebacker recorded just 3 tackles in the win, but he was really solid in coverage, helping double team Rob Gronkowski over the middle of the field.

Jon Bostic was rather quiet too, but played well against the run when on the field.

It certainly wasn’t pretty early on, but the secondary came up big with the game on the line, getting four straight incompletions from Brady in the red zone to win the game.

Joe Haden led the Steelers with a game-high 12 tackles and came up with a massive interception in the red zone on Brady in the fourth quarter, snapping a streak of 24 consecutive red zone scoring possessions by the Patriots. Haden’s pick was by far the play of the game.

Along with Haden’s ability to shut down the Patriots, Mike Hilton did a great job coming off the bench after Cam Sutton started in place of him. Hilton again made the case that he’s a starter in this league, recording 7 tackles out of the slot, helping the Steelers take away Julian Edelman for stretches.

After Artie Burns seemingly blew the coverage on Chris Hogan’s early touchdown, Burns went to the bench and Coty Sensabaugh came on and played well. Granted, the Steelers’ secondary got lucky with 3 huge New England drops that would have been first downs, but this group bent but didn’t break.

Morgan Burnett had the ball go through his hands on the final play of the game for what should have been an interception, but he played a big part in holding Gronkowski to 2 catches for 21 yards in the win, as did Sean Davis and Terrell Edmunds.

Davis and Edmunds combined for 12 stops in the win, while Davis broke up a pass. Both were pretty solid down the stretch, aside from Gronkowski bullying them for a first down after the catch.

Yes, Chris Boswell’s 48-yard field goal late in the fourth quarter gave the Steelers a 7-point lead, forcing New England to find the end zone for just a chance at a tie, but his 32-yard miss in the first half loomed large as the Patriots drove down the field late with a chance to send the game to overtime, or flat-out go for the win with a 2-point conversion.

I’d still move on from Boswell if I were the Steelers. Sure, that made 48-yarder could give him his confidence back, but he’s still struggling with misses.

Jordan Berry was called upon just twice to punt the football on Sunday. Berry averaged under 40 yards per punt, but did drop one inside the 20-yard line, pushing the Patriots back deep in their own end.