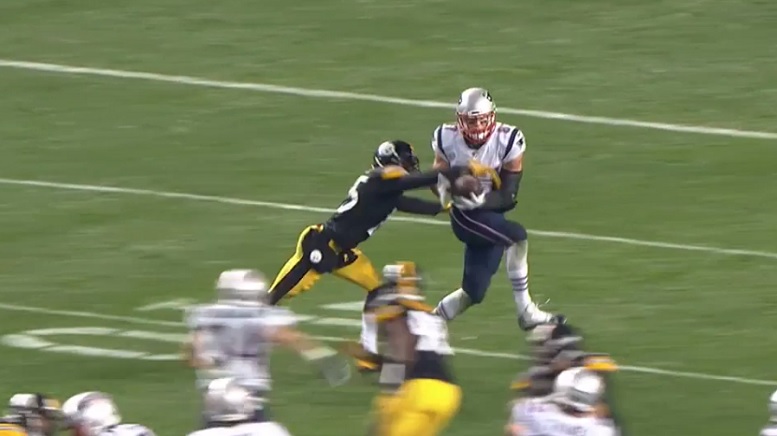 We know some of the basics in slowing down Tom Brady and friends. Knock him on his butt. Don’t utilize spot drop zone coverage. But it’s just as important, and a little less talked about, to vary what you’re throwing at him. Play Cover 1 all game and Brady is gonna beat you. Do anything defensively over and over again and the Patriots will light you up. If you want to get to Brady, make him hold onto the football, you have to force him to process and go through his reads. That means disguising coverages and making him hesitate. That’s how you begin to make him uncomfortable. And that’s how you end up hitting him.

2. They use their “dollar” defense.

Want to use a different approach? I can’t think of anything better than their 2-2-7 “dollar” defense. They used it in camp but have shelved it for all but one play this season. So if you want to throw something out there the Patriots haven’t seen before, that’s a good place to start. The secondary is healthy, even if they’ve made plenty of changes this season, and worked together enough at this point. It’s a way to get Mike Hilton on the field – he deserves to be – even after Cam Sutton has taken the starting nickel role for the week.

Get athletes on the field, cover their speedy backs, and truly play some of your best guys. If you’re going to go down, go down swinging.

I know this whole segment has been defense, defense, defense, and I normally try to vary it up. But with the way things have gone, I doubt you’d disagree. I qualify that statement not to confuse it with true “21” personnel, a fullback and a running back. In those situations, with #46 James Develin in the game, the Steelers need to be in their base 3-4 defense. No issue there.

But when the Patriots, and they do this often, have two runners in the game, Sony Michel and Rex Burkhead, for example, the Steelers gotta switch to nickel. The offense has basically lost a blocker by having two backs in so you’re comfortable with being a “man down.” But you can’t be in base. That’s how you get too many linebackers on talented receivers.

And in this game, Jon Bostic can’t play. At all. Even in base, which is how they’ve decided to use him, I can’t trust him in space. A guy the Patriots will relentlessly attack, no question. Gotta be the Vince Williams and L.J. Fort show, with Fort staying out there in nickel, and a decent amount of dollar with no ILBs on the field.

1. The offense can’t finish in the red zone.

An obvious one. The defense needs to have the game of the season but offensively, they have to keep the game close. Get an early lead or at the least, keep it close into halftime. That means finishing drives, not settling for field goals – especially with Chris Boswell’s struggles – against a top scoring offense in New England. Gotta put the ball in the end zone. Simple as that.

He’s likely to see a lot of “island” (one-on-one) coverage with Antonio Brown bracketed. That part isn’t really new; that’s how most teams operate. What the Patriots do a little differently is how they bracket. They’ll put their second-best corner on the bracket, with safety help, and their best corner – Stephon Gilmore – on the island. Gives them the best of both worlds. So JuJu’s going to have to work hard but he’s the guy who can win. Should see double-digit targets today.

3. Jordan Berry gets a punt blocked.

Real concern here. The Patriots have blocked three punts this year, two of them coming in the first half in the loss to Miami last weekend. They’ll rush eight, try to get a guy free up the middle, stress your protection and communication between the upback (Jordan Dangerfield) and long snapper (Kameron Canaday). Like the Denver Broncos game, think it’s possible the Pats get home today. I know they’re going to try.