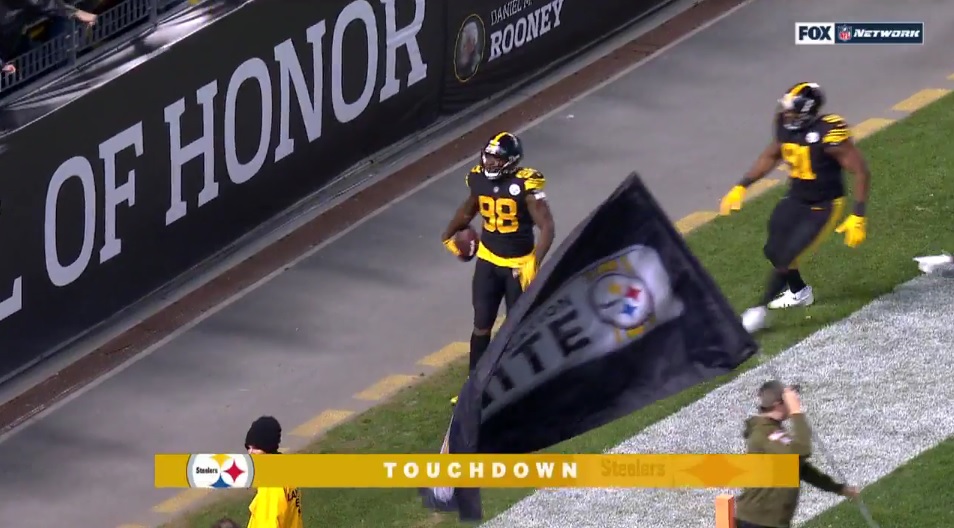 The Pittsburgh Steelers have 46 sacks this season, tied for the second-most in the NFL behind only the Minnesota Vikings with 47, and that is following a game in which they managed just one sack, in spite of the fact that their overall pressure was pretty good, and a definite influence in the win.

The fact that they have been so successful in getting after the quarterback this season—continuing on a theme from a year ago—makes it all the more perplexing that they have been one of the worst teams in the league in terms of recording takeaways. They got just their 14th on Sunday, which is tied for the fifth-fewest in the NFL.

And yet they have given the ball up 23 times, including 13 interceptions from Ben Roethlisberger alone. Joshua Dobbs has also thrown an interception. Roethlisberger has lost a handful of fumbles, as have James Conner and Vance McDonald, among other individual cases.

The Steelers have intercepted only seven passes, and recovered just seven fumbles on defense and on special teams combined. Their turnover differential of minus-nine is among the very worst in the NFL, yet they have a clear winning record. How have they managed this?

It’s because they have done a much better job of creating points off of takeaways that they get than in allowing their opponents to do so off of their giveaways. According to ESPN, even though they have a hugely negative turnover margin, they actually rank slightly above average, 14th, in terms of point differential off of turnovers, having scored four more points off of their 14 takeaways than their opponents have from 23 giveaways.

Sunday’s game against the New England Patriots is a perfect example. Roethlisberger threw two interceptions to Duron Harmon, but New England was unable to put up any points off of either possession.

Then in the fourth quarter, the pressure finally caused Tom Brady to throw a bad pass that Joe Haden was able to intercept. The offense started very deep in its own end, but was able to drive all the way down to the Patriots’ 30 and game away with a 48-yard field goal for three points.

They lost the turnover battle, but scored more points off of turnovers. The best way to prevent turnovers from killing you is very simple: don’t let the opposing offense take advantage of those opportunities.

Roethlisberger has thrown a whopping eight interceptions in his past five games, while the Steelers’ next opponent, Drew Brees, has only thrown five all season. However, he has thrown one interception in each of his past four games, curiously enough, and has just two touchdown passes in his past three games.