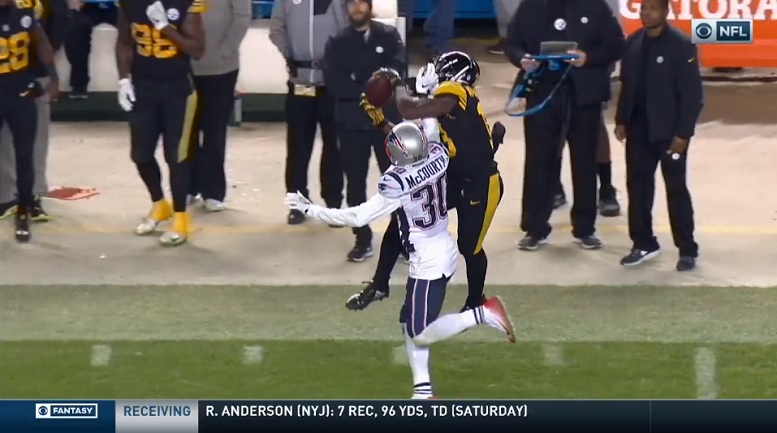 Two members of the Pittsburgh Steelers 2018 draft class made key offensive contributions in the team’s Sunday home win over the New England Patriots and that certainly was great to see. While rookie running back Jaylen Samuels, who was drafted this year in the fifth-round, had a performance on Sunday that will likely be talked about all week, fellow rookie, wide receiver James Washington, the team’s second-round draft pick this year, also had a coming out party of sorts in Sunday’s win as well.

Washington, who entered Sunday’s game having caught just 10 passes for 88 yards and a touchdown so far this season, registered another 3 receptions for 65 yards against the Patriots. Not only that, Washington, who made a college career out of catching deep passes at Oklahoma State, finally registered his first deep reception of his NFL career Sunday, a 32-yard contested catch from quarterback Ben Roethlisberger down the right sidelined with 12:20 left in the third quarter. It would wind up being the Steelers longest play from scrimmage of the game.

Two plays after making that deep reception, Roethlisberger connected with Washington on a short curl route on the right side of the field and the rookie wide receiver proceeded to break a tackle on his way to gaining 24 yards. He also had a 9-yard catch in the middle of the field in the second quarter that moved the chains. After the game was over, Roethlisberger talked about Washington’s play against the Patriots.

Washington made a few big grabs during the preseason but since then his play and contributions haven’t come close to what he put on tape in college. While it was just one game Sunday and just three total catches, they were exactly the kind of plays he consistently made at Oklahoma State over the course of four seasons that resulted in him being drafted by the Steelers in the second-round this year.

If Washington is indeed now turning the proverbial corner, and it’s hard to think that he isn’t, he certainly could wind up making several more big catches to close out the regular season and hopefully during the playoffs as defenses continue to focus mainly on taking away fellow wide receivers Antonio Brown and JuJu Smith-Schuster.