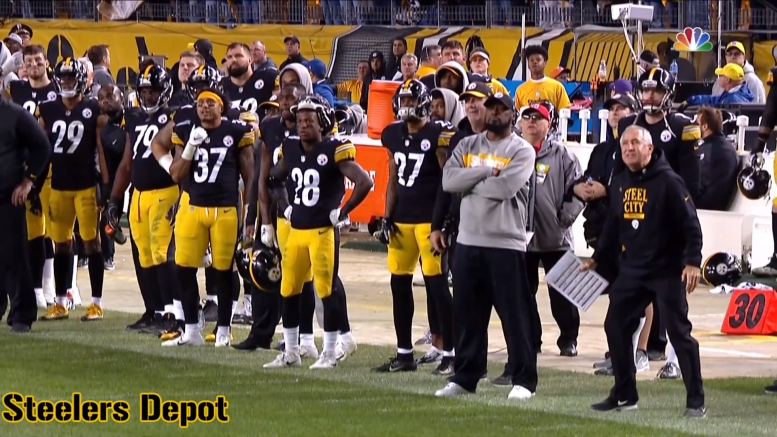 Some games are just stupid. This game tonight was one of them. A lot of it just doesn’t make a whole lot of sense when you consider the odds. But here we are, the Pittsburgh Steelers now sitting at just 7-4-1 after losing two games in a row, corresponding with a three-game winning streak by the Baltimore Ravens that has the AFC North nearly tied.

The stupidity seemed to assault us from so many different directions, but there were certainly some highlights, which began with the Los Angeles Chargers scoring a virtually free 46-yard touchdown by Travis Benjamin on a play on which their right tackle clearly jumped offside and the defense was expecting to get that call.

Another stupid moment was Ben Roethlisberger’s interception from the Chargers’ 22-yard line that he lofted in the direction of Vance McDonald but seemed more intended for Los Angeles rookie safety Derwin James, who had a great game outside of the very easy interception. Perhaps he was afraid of throwing an interception in the red zone again, so he got it out of the way before they crossed the 20.

Want more stupid? How about an obvious block in the back penalty not called for Brian Allen on a 73-yard punt return touchdown by Desmond King—the very same penalty that the Steelers were flagged for on special teams earlier in the game.

Most stupid of all, however, was Joe Haden and Sean Davis negating themselves in front of Keenan Allen in the end zone, turning what should have been an interception into a touchdown. Haden had the read on the ball before Davis came in and collided with him, popping the ball up just enough for Allen to show great concentration and snag it out of the air.

On top of all that, both of the previously mentioned scores resulted in injuries. Long snapper Kameron Canaday was injured trying to tackle King on a return that never should have happened. Davis ended up injuring Haden.

But at least they were able to come back. James Conner and Ryan Switzer both left the game on the game-tying drive late in the fourth quarter.

And how about ending the game by jumping offsides three consecutive times in an attempt to defend the game-winning field goal? The kicker actually missed the first one, too, which would have sent the game into overtime.

And then you let rookie running back Justin Jackson dominate the fourth quarter after hardly playing up to that point, and only seeing time because Melvin Gordon was out. The Chargers had two rushing yards in the first half, and that wasn’t for a lack of trying.

My prevailing sensation coming away from viewing this game is that it was just stupid. Looking at how a football game normally should go, this one seemed to go in many directions it simply shouldn’t. Some of those were on Pittsburgh, some out of their control, but the result is the same, and now instead of competing for a bye week they’re just hoping to keep their division lead.