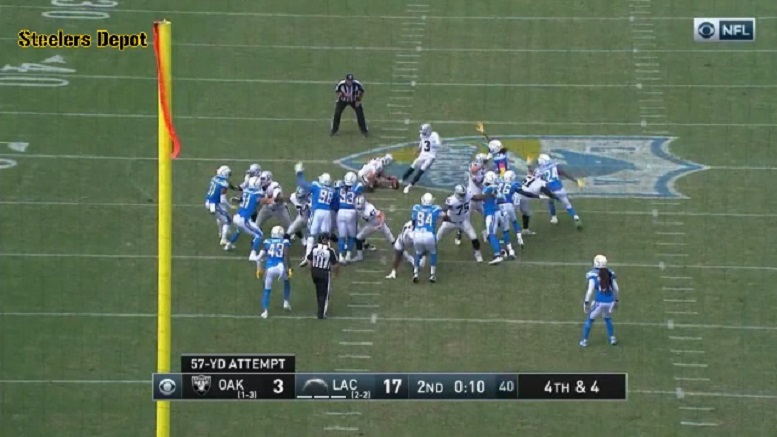 It wouldn’t have been surprising a couple of weeks ago to hear the Pittsburgh Steelers announce that they had signed a new kicker. After all, they literally brought some in to hold a legitimate tryout to compete with Chris Boswell, whom they ended up choosing to retain. Boswell missed his first field goal attempt after the trial, but made his next three, including to from just under 50 yards.

But the Steelers placed him on Injured Reserve yesterday with an undisclosed injury and signed one of the kickers that they brought in for that tryout, Matt McCrane. McCrane is only guaranteed one game with the team, as they are about to embark on their regular season finale and cannot secure a playoff berth merely with a victory.

That’s alright by him, who told the media during his first interview yesterday, “I really do take it one kick at a time. If I miss the previous kick, I move on and go to the next. Whatever happens from there forward, that’s what happens. So that’s kind of what I’m focused on, is the current kick. Whether that’s a field goal or a kickoff, I just take it one kick, one practice, one game at a time”.

It’s a wise strategy for him to take, given the way that his career has already gone to this point. While he was able to gain some NFL experience earlier this season, signed as an injury replacement by the Oakland Raiders, he has yet to hold a permanent job.

With the Steelers making this move now, however, they get an early look at him now with the opportunity to control his rights as a Reserve/Future signing. Boswell is due a bonus in early March, so it might be of benefit to them to get as good of a look as possible at McCrane.

One thing we should know for sure is that whatever happens next year, Boswell is not going to remain unchallenged. He might have a Pro Bowl listed on his resume from the 2017 season, but that’s old news at this point. You can’t miss a combined 12 kicks in a season and still expect to be Teflon tough.

I don’t tend toward conspiracy theories, so I’m not going to assume that there is anything out of the ordinary about the Steelers’ move to put Boswell on Injured Reserve. It’s quite common for teams who don’t have a playoff game to play to do that with any player not expected to play in the finale. Jon Bostic was put on Injured Reserve last year, for example, even though his injury wasn’t very serious.

Whatever the reason might be, the circumstance does afford the Steelers the opportunity to get a look at another kicker, which should be able to tell them something, whether good or bad, about Boswell and his future.